A new Garden of the Righteous Worldwide 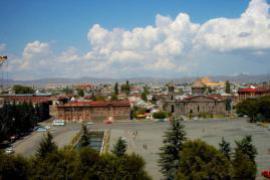 Creation of a new "Garden of the Righteous worldwide" in Gyumri, Armenia. The first tree was dedicated to the murdered journalist Hrant Dink who had worked for the recognition of the Armenian genocide and the protection of minorities in Turkey.

Among others, special guests and speakers are the journalist's wife Rakel Dink and the Honorary consul of Italy to Gyumri, Antonio Montalto.

11 a.m. - Presentation of the economic and social-cultural projects of Gyumri. Remarks by Antonio Montalto and Manoug Manuel Pamokdjian (Cinema Oktober)

Discussion with the participants

2.30 p.m.  -Inaugural visit to Villa Kars, dedicated to the International Center for Peace and Development

3.30 p.m.  - Visit to the photo exhibition by Max Sivaslian The hidden or islamized Armenians of Anatolia (Library of the European Cultural Center in the premises of the Honorary Consulate of Italy to Gyumrì)

4.30 p.m. - Laying of the first stone of the Garden of the Righteous Worldwide with the participation of the Turkish delegation and representatives of Armenian and international institutions. For the occasion Rakel Dink will plant a tree in memory of her late husband Hrant Dink.

8 p.m.  - Concert of instrumental music by the Goussan ensemble (Church of Surb Khach)