Creation of a new Garden of the Righteous 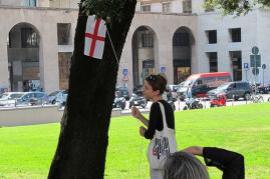 Genoa, Garden of the Righteous

Also Genoa now has a Garden of the Righteous. Liguria's administrative center is the third town in Italy, after Milan and Padua, to remember the figures of civil courage who have opposed totalitarianism and genocides.

On Tuesday 12 July 2011 in piazza della Vittoria (Victory square) the first three plaques of this garden have been unveiled. They are dedicated to those who have risked their lives to rescue the persecuted: “to the witnesses to the genocide in Rwanda who are the bringers of memories and peace", "to those who devote their lives to report the silent massacre of women in Ciudad Juarez" and "to the Russian journalists fallen while doing their duty". Inauguration was held in the presence of Yolande Mukagasana, witness to the Rwandan genocide and nominated for the Peace Nobel Prize, Vera Politkovskaya, the daughter of journalist Anna Politkovskaya, murdered in 2006, and Sandra Rodriguez Nieto of newspaper El Diario from Ciudad Juarez. The City Hall has awarded the three women with the honorary citizenship.

This new Garden is at the heart of the International Rights Week, the major event held in Genoa upon the initiative of Nando Dalla Chiesa. Mayor Marta Vincenzi said: "Creating the Garden of the Righteous in Victory square has a double symbolic meaning. It doesn't always mean to acknowledge he importance that we currently assign to the capability of bearing witness and fighting against any kind of oppression of the individuals, as well as awarding the figures who do this in the world.

It also means doing so under the Monument to the Fallen that, here as well as in the other Italian towns, reminds us of the "Sons fallen for the Homeland" in a politically instrumental way. A monument that was built in an era in which more than the deeds of the 'Righteous' we used to abet the use of force by Nations that fought against eachother. [...] Those who deserve and are worthy of our memory today are not those who fight against another people to assert the force of a Homeland against another one, but those who want to assert international and human rights, those who struggle to put an end to war".