The Garden of the Righteous of Assisi 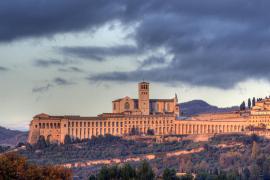 View of the city of Assisi

Whoever saves a life, saves the entire world. So reads the Talmud, in the  Sanhedrin treatise. In the discourse of Holocaust Remembrance Day, this sentenced is quoted in recognition of the Righteous, those who saved the Jews during the Holocaust to the risk of their lives, and it sounds as a secular blessing of their souls.

The first man who wanted to honor these invisible heroes was Moshe Bejski, who committed himself to establishing the Righteous Commission at Yad VaShem, a "tribunal" that would examine and eventually recognize the merits of the Righteous, with a Garden in which a tree would be dedicated to every Righteous.

Whoever saves a life maybe does not save a world that is mostly suffering, but surely saves hope, the hope in the "innermost goodness of human beings" that was mentioned by Anne Frank, that spark of optimism that was there even in Primo Levi's testimony, as he said that Memory serves the purpose of preventing future evils.

Precisely Primo Levi, Holocaust survivor and one of the first and most poignant theoreticians of the duty and usefulness of Memory, believed that from the awareness of what had occurred in the Shoah people should learn to be particularly sensitive towards violence prevention. Not only preventing the violence against the Jews, but any kind of violence everywhere and against anybody. Primo Levi's message was in fact targeted to people everywhere and every time.

The international project Gariwo - The forest of the Righteous  was set up to the purpose of recognizing and remembering all those who commit themselves for human rights and against every genocide anywhere in the world. This way, the idea of the Righteous of Moshe Bejski's, rooted in the Jewish tradition, takes up a universal dimension, the universal dimension that Primo Levi thought Holocaust Memory should have.

On 6 March 2015, European Day of the Righteous, the city of Assisi will enter Gariwo's international network with its own Garden of the Righteous, whose physical center will be the courtyard of the Bishop's palace, and will grow all along with true and symbolic trees and projects in all the city's territory.

This place is the fruit of a precise chooice. In 1943-44 the courtyard of the Bishop's palace was the center of a broad solidarity network that in Assisi saved 300 Jews from the death camps. It was an exceptional and particular story, because under the authoritative guidance of Bishop Placido Nicolini, the big majority of the citizens became, in various ways, "accomplices" of this rescue plan. Some of them were recognized as Righteous by Yad VaShem, achieving for Assisi the record of city with the highest ratio of Righteous out of the local population.

The Garden of Assisi is set up with the wish that the Memory of Good educates people to the value of coexistence. This is why, in the spirit of Gariwo - the forest of the Righteous, the courtyard of the Bishop's palace will become the physical center of our Memory and the spiritual home of all those who have struggled and are still fighting against genocide and to affirm human rights all over the world.

We call them ‘the Righteous of Peace’. Every year one of them will be honored within our Garden and the school pupils will be involved with projects regarding their history.

The inauguration of the Garden of the Righteous of Assisi, upon proposal of the Italy Israel association of Perugia, is possible thanks to the synergy of various institutions operating on the territory: the Bishopric and the City Hall of Assisi, the Unesco Office for the Support to the United Nations of the Assisi City Hall, the Foundation "Casa Papa Giovanni", The Museum of Memory of Assisi and the Regional Education Office for Umbria.

Maybe it is a sign of destiny that precisely this year, three days after our inauguration in Assisi, on 9 March there will be the inauguration of the Garden of the Righteous of Neveh Shalom/ Wahat el-Salam/ Oasis of Peace, the village at the doors of Jerusalem where Palestinian Arabs and Israeli Jews live nurturing peace and mutual respect. In this Garden they will mention and honor the Israelis and the Palestinians who commit themselves to peace among the two peoples.

Of course, this is a sign that the ideal forest of Gariwo is growing, and thanks to the steady commitment of Gabriele Nissim, is bringing into many places fruit, oxygen and shelter from the sun and other dangers. And we are happy to be there.