The first EU Day of the Righteous in Germany 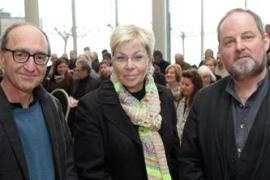 On "European Day of the Righteous" the Parliament of "Land Nordrhine Westphalia honored two men from this region who have opposed crimes against the humanity.

The President of the Land's Parliament Carina Gödecke underlined the courage and engagement of writers Armin T. Wegner and Doğan Akhanli, who rescued persecuted people to the price of being persecuted themselves.

Writer and jurist Armin T. Wegner, said the President, has already been honored by Yad Vashem's Holocaust Memorial as "Righteous among the nations”. This defender of human rights and conscience objector from Wuppertal-Elberfeld, close associate  of Ernst Toller, Erich Maria Remarque and Erich Mühsam, was forgotten after second world war.

“Today we want to bring him into the spotlight, to the public attention, again", said the President of the Parliament. Wegner, as young healthcare officer serving in the Ottoman Empire, had personally witnessed to the cruelty of first world war, including the crimes perpetrated against the Armenians. Due to his many successful books he was targeted by the Nazis, who forbade and burnt his works. Through his "letter to Hitler", Wegner protested in 1933 against the discrimination and persecution of the Jews in Germany. The Gestapo arrested and tortured him. After his release, Wegner managed to get into safety heading for Italy, where he would die, in Rome, at age 91.Gödecke went forth: "We want to remember his life and work through a praise and an exhibition entitled: "Rebel much and obey little!". The exhibit, curated by Judith Schönwiesner, illustrates the exemplary deeds of Wegner's with unpublished texts and pictures and original artifacts.

The author of the Praise to Wegner was Hermann Schulz, one of the symbolic figures in Memory culture in Germany, who in the Seventies bravely started republishing Wegner. In Schulz' opinion, "the moral heritage of the writer and activist belongs to the whole of us”. Actress and director Günfer Cölgeçen animated the Day dedicated to civil engagement by playing Wegner's texts. The writer in 1919 in his Open letter to US President Woodrow Wilson had denounced “the deportations of Armenians into the deserts of Mesopotamia" as key topical issue, unambiguously representing its fate with verbs such as "shot, hung, poisoned, stabbed, crushed, destroyed by epidemics, starved and thirsted to death, devoured by the jackals”. In his “letter to Hitler” Wegner opposed the persecution against the Jews and reminded that the defeat and unfortunate time to which Germany was condemning itself would have not been forgotten for a long time. He also forecast the reduction of German cities into debris, warning Hitler that he was sullying the honor of Germany forever.

“By the term “the European Day of the Righteous” it is also meant to honor those who act bravely today, not letting their freedom of expression and civil courage be crushed, and therefore are exposed to the will and violence of the state",reminded the President of the Parliament of the Land introducing people to the Turkish writer of German descent from Colonia, Doğan Akhanlı, an exemplary figure in the memory of genocide cases of the Twentieth century, like the crimes perpetrated against the Armenians. Akhanli glance though goes even further: he committed to the cultural dialogue aiming at reconciliation. In his opinion, "all topics are allowed, except for hatred which is never admitted".

Hans Zinnkann and Wibke Busch, Press envoys of the Parliament of Land Nordrhine Westphalia; translation from German into Italian and English by Carolina Figini