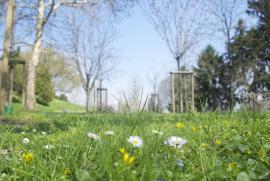 Milan's Garden of the Righteous

The Associazione per il Giardino dei Giusti (formed by Gariwo, City Hall and UCEI UCEI) has chosen the figures who will be honoured on the next European Day of the Righteous. The Association has welcome the nominations put forward by Gariwo on the subject "The moral and civil resistance of women for their dignity as a universal heritage”.

“This year, again the Associazione per il Giardino dei Giusti approved Gariwo's proposal - said Gabriele Nissim -. We are happy about it because we care a lot about the subject of the moral and civil resistance of women to defend their dignity. Their struggle, carried out all over the world, involves us all, because it embraces the defence of the fundamental rights of every human being. This is why we deemed it important to hold the celebrations  of next European Day of the Righteous on the same symbolic date of International Women's Day, i.e. 8 March”.

All over the world, in fact, there is a growing awareness of the peculiar role of women in every field of human development. The contribution of female specificity, the women's added value, nourished with inclusive capability and listening, openness to the world and cooperation, weaving of relationships and solidarity, stubbornness and resolve, sense of justice and pity, is no longer questioned.

The turn of the millennium has witnessed the rise of the new challenges of globalisation, the economic crisis, the emerging Countries, the outbreak of new conflicts and the sharpening of unsolved contradictions, which once again penalise women prior to any other condition and endanger the achievements that were so hard to reach. The reaction has been prompt: although painfully, a new will of sorting our of marginalisation, anonymity, subjection, brutishness and humiliation has arisen among the most aware and the bravest women, heralds of a transversal movement which has no geographic boundaries nor national, ethnic, political or religious connotations; a wave of rebellion that has a lot to do with the defence of fundamental human rights and thus trespasses those boundaries, refusing any logics of belonging that tramples on human dignity in the name of a misunderstood identity.

From Africa to Asia and Latin America, we come across female journalists, students, clergies, activists, political militants who nearly risk their lives to unmask torturers and murderers, to demand equality and respect, to ask for decent life and work conditions, freedom and democracy. This battle starting from gender issues to embrace the defence of every human being's rights assumes a universal symbolic value and configures itself as the queen of all battles.

This is why, on European day of the Righteous, at the Garden on Monte Stella Hill we will dedicate six new trees to Halima Bashir, young doctor from Darfur, who had the courage to report the rapes perpetrated by the Janjaweed militias; Vian Dakhil, Iraqi deputy who addressed a passionate call for the Yazidis trapped in the Sinjar Mountains, accusing the ISIS of genocide; Sonita Alizadeh, Afghan rapper from Herat, who is struggling against the tragedy of child brides; Flavia Agnes, Indian lawyer, brave activist for the rights of women of all status and faiths, against gender violence and for a legislation that protects them; Azucena Villaflor for the mothers of Plaza de Mayo, who in the Seventies dared defy the Argentinian dictatorship, invoking truth and justice for their missing dears, the "desaparecidos"; Felicia Impastato, who defied civil death and social contempt, first by claiming her estrangement from the mafia gangs and then demanding truth and justice for her son Peppino, murdered by the mafia in 1978.