"Past and present, the always needed Righteous" 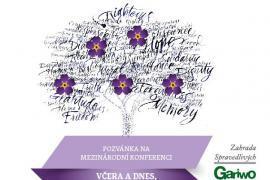 International Conference on 11 March from 4 to 7 p.m. at Goethe Institut in Prague (Masarykovo nábřeží 32, 110 00 Praha 1), followed by concert "Komitas/Sahakiants, liturgy for string instruments performed by the Orchestra of Karolina University directed by Haig Utidjian, from 8 to 9 p.m. in the same room as the conference.

The conference, held in Czech and Italian with simultaneous translation, under the patronage of the Embassy of Armenia to Prague and the Italian Institute of Culture of Prague, will be held under the aegis of the celebrations of the 100th anniversary of the Armenian genocide and to deal with the most topical issues like Islamist fundamentalism, the dangers deriving from it and the examples of moral resistance against it. Special guests include Armenian Ambassador H.E. Tigran Seiranian, former Foreign Minister and founder of the Diplomatic Academy Cyril Svoboda, former Foreign Minister and secretary of the TOP09 party Karel Schwarzenberg. Exceptional guests will be also Antonio Ferrari, Corriere della Sera editorialist and deep connoisseur of the issues present in the Middle East, where he interviewed all greatest political leaders (like King Hussein and King Abdullah of Jordan, Egyptian President Hosni Mubarak, Israeli PMs Jicchak Rabin, Shimon Peres and Ariel Sharon, ANP presidents Yasser Arafat and Mahmúd Abbás, Syrian President Bashar Assad, Lybian commander Muammar Gheddafi, Turkish president Abdullah Gul and prime minister Recep Erdogan) and Domenico Quirico, war correspondant of La Stampa who was imprisoned by the Islamist terrorists in Syria for 5 months in 2013.

Conference to be followed by Komitas/Sahakiants, liturgy for string instruments (classical music from Armenia). Orchestra of the Karolina University,directed by Haig Utidjian.