Fall in love with freedom. 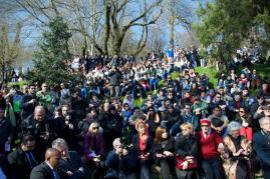 The stones were uncovered in the presence of the mayor Giuliano Pisapia, the auxiliary Bishop Erminio De Scalzi, the president of the Municipal Council Basilio Rizzo, the president of Gariwo Gabriele Nissim, the councilor of UCEI Giorgio Mortara and of the Honorary Consul of the Republic of Armenia, Pietro Kuciukian.

Don Barbareschi spoke to many young people present at the ceremony, to remember that “Either you live the way you think or you’re a slave. I hope you will be able to react to slavery today : yesterday we were afraid of using the miter, today they try to condition you with the hand of velvet , but they are strangling you all the same. Be free , critical and aware. Mankind is not divided between believers and non-believers , but among enslaved men and free men." His speech was a very touching and heartfelt appeal. “Young people, fall in love with freedom. This is how you will become adults.”

The ceremony also involved Clarence Seedorf, for years dedicated to humanitarian initiatives and also the fight against racism. “Sport, -said the coach of AC Milan- is a fantastic vehicle of training for young people, particularly in combating racism. Nobody is born a racist . All children are born with a pure heart , and we must keep this heart as pure as possible . I hear too often about combating racism, and instead we should talk about more integration , collaboration, and mutual respect. "

On this occasion, Seedorf was able to greet Sello Hatang, the CEO of the Nelson Mandela Foundation, who he had already met in South Africa alongside Mandela. A hug and the passing of stories between the two, leaving the words to Hatang, who told the young people a story of Madiba and reminded that reconciliation “cannot pass with just laws, but should start from the heart of the people.”

Marco Roncalli, great-grandson of Pope John XXIII, spoke of the pontiff who not only rescued Jews when he was an Apostolic Delegate to Istanbul and Paris, but also opened the Church to the world, to interreligious dialogue, ecumenism, liberty, justice and peace.

And while Pisapia defines the Garden of the Righteous as a place that creates a solid foundation on which to build our future, Sandrina Bandera, director of Brera, spoke of the life of Fernanda Wittgens, the lawyer Claudio Sala reminded us of the passion of his grandfather for the milanese dialect and the Armenian ambassador Sargis Ghazaryan urged us to not indulge in denial, a phenomenon that “kills the memory.”

“We should dedicate this day- said Gabriele Nissim- equally to those of the past and those of today, who defend human dignity in Ukraine, in Syria, in Central Africa. The Righteous unify the memories, because they show that every human being can do something against evil.”

Ceremony at the Garden of the Righteous of Milan 2014