Celebrations in Italy and the world 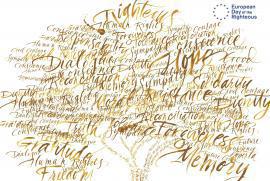 Logo of European Day of the Righteous

“Then and Now, the Always Needed Righteous” is the theme chosen to celebrate the third annual European Day of the Righteous, established by the European Parliament upon Gariwo proposal.

This year, after the terror attacks that hit Jews, Arabs and Christians from Paris to Copenhagen, from Libya to Syria, we launch a call for all European and Italian towns to remember all those moral figures, like the French Muslim Lassana Bathily, who bravely try to save lives and defend human dignity face the savage and criminal deeds of jihadist extremists. The defeat this new kind of extreme evil, that once again challenges our human condition, cannot be achieved by creating walls dividing civilizations from each other, but by bringing about all moral examples of resistance that arise within the Muslim and Arab world. We must not leave these new Righteous people alone.

In this spirit we commemorate the centennial of the Armenian Genocide, and in particular today we remember the figures of people who have committed themselves to the reconciliation process between Turkey and Armenia.

Remembering the Ottoman Turks who rescued the Armenians and the Turks who are bravely fighting genocide denial is a top priority, because the removed memory of that genocide has so far prevented the creation of the moral antidotes against the news savage deeds that we are still unfortunately witnessing nowadays in the very lands of the first extermination of the Twentieth century occurred.

In this international crisis, the new Righteous are also those who devote their lives to rescue the migrants fleeing famine and persecutions in the Mediterranean Sea. The world community was responsible for the Shoah also because it abandoned the Jews crossing lands and seas to escape from Nazism. Whoever today saves the lives of the Syrian, Iraqi or Libyan refugees, is committed to preventing such a shame from repeating.

On 3 March, at 6 p.m., in Palazzo Cusani opening of the Milanese celebrations with the international conference “La Giornata europea dei Giusti - La memoria del Bene e l’educazione alla Responsabilità” (The European Day of the Righteous – Memory of Good and Education to Responsibility), organized by Gariwo in cooperation with the Consular Corps of Milan and Lombardy and moderated by the Corriere della Sera editorialist Antonio Ferrari. Remarks by the Minister of Foreign Affairs Paolo Gentiloni, the President of the Lombardy Region Roberto Maroni, the Mayor of Milan Giuliano Pisapia, the director of Corriere della Sera Ferruccio de Bortoli and Gariwo chairman Gabriele Nissim.

The conference is placed under the High Patronage of the President of the Republic and is sponsored by the Senate of the Republic, the Chamber of Deputies, the Lombardy Region and Milan City Hall.

6 March, at 11 a.m., at the Garden of the Righteous Worldwide on Monte Stella Hill, trees and memorial stones, with the following inscriptions, will be dedicated to:

Syrian lawyer, activist for human rights and against fanaticism, missing since 2013 when she was abducted near Damascus by jihadist extremist groups

young pacifist arrested and killed in Syria in 2011, he offered flowers to the soldiers in sign of dialogue and he struggled for human rights and freedom

Testimony by Rana Zaitouneh, who, in cooperation with Gariwo, will launch the call for the liberation of her sister Razan, now in the hands of a jihadist extremist group

Ottoman Turk, mayor of Aleppo, who opposed the orders of his government that forced subjects to eliminate the Armenian people in the genocide of 1915

Testimony by Pietro Kuciukian, Honorary Consul of Armenia and founder of the Remembrance Wall for the Righteous in Yerevan

The Men and Women of the Coastal Ward

who risk their lives, each with great courage and selflessness, from Lampedusa and on, all along the Italian coasts, to save the castaways fleeing famine and violence

Testimony of the representatives of the Coastal Ward

Italian-Eritrean humanitarian activist, she has risked her life to rescue the persecuted in Africa and she helped migrants and their relatives in Lampedusa after the tragic shipwreck of 2013

she will personally deliver her remarks

absolutely honest and very humane judge, brave promoter of the first anti-Mafia pool of the Courtroom of Palermo, murdered by the mafia gangs in 1983

Testimony of his children Caterina and Giovanni

On 6 March, inauguration of “Gardens of the Righteous” in Assisi and in Orzinuovi (BS). Ceremonies in honor of the Righteous will take place also in Florence, Benevento, Bitonto (BA), Rimini, Bellaria-Igea Marina (RN), Solaro (MI) and in other Italian towns.

11 March – At the Goethe Institut, Gariwo-Czech Republic will hold a conference dedicated to the centennial of the Armenian Genocide, and to Righteous Armin T. Wegner with Tigran Seiranian, Armenian ambassador in the Czech Republic, Milada Kilianova, peace operator of Czech NGO People in Need, Jan Machacek of the Václav Havel Library, and Pavel Barsa,of the Institute for international relations. The editorialist of the Corriere della Sera Antonio Ferrari and the war envoy of La Stampa Domenico Quirico will retrace the events that are setting the Middle East afire. Closure with concert of Armenian music. Under the patronage of the Armenian Embassy to Prague, Italian Cultural Institute in Prague,Václav Havel Library, Charter77 foundation.

6 March, at 7 p.m. – Party for the Righteous at the Museum of History of Polish Jews, the Polin(“Poland” in Hebrew),that is situated in the heart of the former ghetto of the Polish capital and tells about the millenary presence of Jews in Poland. Actress Maja Komorowska will play passages inspired from the lives of the Righteous, with the musical accompaniment of the duo formed by Laura Bortolotto (violin) and Matteo Andri (piano), a gift by the Italian Cultural Institute. On this occasion, announcement of the name of the Righreous (Nelson Mandela, Hasan Mazhar, Petro Grigorenko) who will be honored on 27 April at the Garden of the Righteous, inaugurated in 2014 to mark the 25th anniversary of the semi-free elections in Poland.

6 March - Svetlana Broz, director of Gariwo - Sarajevo, will hold the ceremony of assignment of the Dusko Kondor Awards for Civil Courage in Vijecnica, the library that was set afire in 1992 and rebuilt in 2014, in the presence of Valentin Inzko, High Representative of Bosnia and Herzegovina, Stjepan Mesić, former President of Croatia, Mary-Ann Hennessy, Director of the Bureau of the Council of Europe in Sarajevo. Winners are Đoko Stevanović, Zoran Pusić, Senija Karamehić, Rašid Palić, Latinka Perović.

6 March, at 2 p.m. – In the Parliament of the Land of Nordrhine-Westfalia musical-literary ceremony in honor of Armin T. Wegner, Righteous for the Jews and the Armenians who tried in vain to report the Metz Yeghern and the persecution of Jews in Germany, and Dogan Akhanli, who struggled for the truth about the murder of journalist Hrant Dink in Turkey. Event promoted by the A. T. Wegner Society.

9 March – A few weeks after the international conference on genocide prevention with scholar Yehuda Bauer, the Open University of Israel based in Ra’anana will hold a meeting with Gabriele Nissim, Pietro Kuciukian and Yair Auron to announce the creation of Gariwo - Israel.

On 10 March, in Neveh Shalom - Wahat el Salam (“Oasis of peace” in Hebrew and Arabic), the village inhabited by Palestinian Arabs and Israeli Jews, ceremony of dedication of trees to the Armenians who rescued the Jews in the Holocaust, the rescuers in the Rwanda genocide, and the Israeli Jewish and Muslim Arab Righteous.

Gariwo is also working with Raoul Wallenberg Foundation at projects about the memory of the Righteous, dedicated in particular to the research about Arab and Muslim figures who rescued the Armenians during the genocide of 1915, and of Greek citizens who rescued the Jews during the Holocaust.