Armenia for the Day of the Righteous

the Armenian support to the celebrations 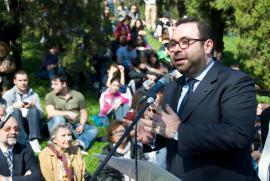 The events for European Day of the Righteous 2016, to be held by Gariwo from 6 to 8 March in Milan, also found the support of the Embassy of the Armenian Republic to Italy, Association Italiarmenia and the Union of Italy's Armenians.

Following is the Embassy's message:

"The European Day of the Righteous is not only there to commemorate history, does not only remind us of the deeds of women and men of the past who acted for truth, justice, the safeguard of human dignity, putting at risk their freedom and lives; it is unfortunately a highly topical theme, as are of extreme topicality the mass murders and crimes against the humanity that are still perpetrated nowadays. In the Mid-East and in an enlarged Europe, today we witness the arrival of thousands refugees fleeing from war, who in the countries of transit or permanence are the targets of xenophobia, when not straight marginalised in the overall indifference.

Our wish is that year after year, more and more are the "recognised Righteous" to be celebrated and more and more are the countries, which will establish formally 6 March as the Day of the Righteous. The example set by their lives and their deeds above all as the new generations are concerned, is what we need to act and be able to counter evil by the means of many righteous and good deeds."

Following is the Association's message:

"Italiarmenia Association wishes to remind that 6 March is the recurrence of European Day of the Righteous Worldwide.

On this day we honour the Righteous in the Genocide of the Armenians, in the Holocaust, in different cases of genocide and gross human rights violations perpetrated all over the world.

On this day Italiarmenia wishes to mention especially the different initiatives that association Gariwo - founded by an Armenian, Pietro Kuciukian, and a Jew, Gabriele Nissim – will perform on that date."

Following is the message of the President of the Union of Italy's Armenians Baykar Sivazliyan:

"I wish to express Gariwo and the "Associazione del Giardino dei Giusti" my ever growing support to the celebrations of European Day in memory of the Righteous. The initiatives which, revolving around Milan's focal point, irradiate to other places, in Italy, Europe and all over the world, mark an important stop in the pathway to bring about the memory of good.  In our modern times seeing evil, mass atrocities and violence resurface all over the world including our cities, Europe can find again its essence only by sharing the values for which the Righteous and moral resistants have sacrificed and still sacrifice their lives and freedom.

The theme of the moral and civil resistance of women in the defence of their own dignity, placed at the core of this year's celebrations, holds a particular significance within the dimension of our globalised world, showing us how broad is the extent of violence against women and their fundamental rights. The witness of those who have been and are still able to resist and still fight this violence, also sacrificing their own lives, is the only hope we can offer the younger generations.

To the resistance of a few female survivors, we Armenians how our rebirth, after the genocide against our people, the first of the Twentieth Century.

The six women from all over the world who will be honoured on 8 March at the Garden of Monte Stella Hill in Milan, keep a flicker of humanity lit in the darkness surrounding us our wish is that from their example we can summon the force necessary to tear down the walls and barbed wires of boundaries and to welcome a wounded and suffering humanity struggling for safety. The moral and civil resistance of women can hence become a universal heritage."