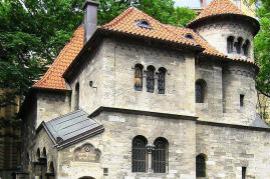 In the Czech Republic, a branch of Gariwo is about to be born, which will face the particular challenges and opportunities connected to both the past and the present of the first country invaded by Hitler as well as the country of dissidents such as Václav Havel and Jan Patočka during the Cold War era. We are speaking with the new branch’s founder, the journalist and translator Andreas Pieralli, as well as the scholar Miroslava Ludvíková.

What are you planning for the European Day of the Righteous in the Czech Republic?

We are organizing a conference on the theme of the Czech Righteous that will take place on March 10th at the Italian Culture Institute. The goal of the conference, among other things, will be to present the new organization, its objectives, and future plans. Among the guests, we will have Marta Kottová, a holocaust survivor who is very active in the defense and dissemination of historical memory. In live Skype from Italy, we will then have Miroslava Ludvíková, a historian who has studied the Czech Righteous and will share some very interesting discoveries she has made in doing so. The conference will be followed by a concert featuring the celebrated pianist Gaetano Liguori who will play “A Piano for the Righteous.”

Who are the organizers and what spirit did they bring to planning this event?

First, the Czech branch of Gariwo, in its nascent stage, in conjunction with other key partners such as the Italian Cultural Institute in Prague, the Italian Embassy in the Czech Republic, the NGO Post Bellum and the Institute for the Study of Czech philosopher Jan Patočka. In addition to these, we are building a large network of support and collaboration with other local NGOs that deal with similar themes. The European Day of the Righteous last year saw the support in the form of sponsorship of 11 NGOs as well as the Chamber of Deputies, the City of Prague, the Czech Centre of Milan and some of the highest Italian institutions in the Czech Republic.

Can a branch of Gariwo begin in the Czech Republic?

Not only can it happen, it’s happening right now! We are already working to carry out all administrative tasks necessary for the establishment of a new organization under Czech law that will bear the name of Gariwo- Zahrada Spravedlivých, the Czech translation of the Gariwo name. I would like to specify that this is not the first event of this kind that we’ve had in Prague, in fact it is already the third conference. Both previous editions have been a great success with the public, a sign of a strong interest in these issues that we want to capitalize on.

Will you also work to remember the Righteous during the times of Communist Totalitarianism in the Czech Republic?

For a country like the Czech Republic, a former pawn of the Soviet Bloc, the memory of Communism and its crimes against freedom is particularly vivid and delicate. It’s important to remember, in fact, that this country, unlike Germany with Nazism, has not experienced a real catharsis or atonement and even today the interpretations of recent national history are mixed. Recall perhaps, a few days ago, how a communist senator told journalists that that the military invasion of the countries of the Warsaw Pact led by the Soviet Union to quell the so-called Prague Spring of 1968 was, in fact, “international aid". It is useful to recall in this regard that in the communist Czech Republic, the least and the most conservative of the reformed communist parties of the former Soviet bloc countries, is now the third largest party with almost 15% of the vote and many prominent members, political but also economic and entrepreneurial veterans of the former communist nomenclature. This fact, among others, is a major part of the obstacle to real awareness and ultimately distancing from the Czech Republic’s totalitarian past as well as the frustration of the most liberal and progressive country that has seen its values of the Velvet Revolution of 1989 betrayed constantly.

Will you also address the universal value of the Righteous during the conference?

Prague ,thanks to the actions of Václav Havel and the group of dissidents who signed Charter 77, has always been a center of intellectual, cultural and moral resistance(think, for example, the sacrifice of Jan Palach) and has always significantly inspired its neighboring countries. This is also why the whole country was under strict Soviet surveillance and in the years of normalization, the local regime was incredibly closed and resistant to any reformist drive. The themes of the Righteous are largely tethered with Yad Vashem, due to its strong ties with the Jewish community. However, the Righteous aren’t sufficiently understood in a universal sense and this is precisely the field on which we intend to focus on.

Everyone knows the Jewish Quarter of Prague. Is it solely the work of the Jewish community or are there other institutions to take charge of the preservation of historical memory?

Historically, the Jewish Community of Prague and the Czech Republic in general is very well established and actively works on this preservation. They also actively work to preserve the memory of the injustices perpetrated by the Communist regime. In fact, there are many associations and non-governmental organizations that deal with this issue through a wide variety of projects for the public at large. Among these it is worth mentioning certainly Post Bellum, Pamet Naroda (The Memory of the Nation), Narod Pohasl (The Nation is Burned), Ziva Pamet (Memory Viva) as well as those related to intellectual legacy of Václav Havel, such as the Library Václav Havel and the Foundation VIZE 97.

What are the challenges and what are the advantages of the Czech Republic to work on the history of the Righteous?

In addition to seeking a catharsis for the Communist epoch, probably the most important challenge for the Czechs will be relations with the Roma, the largest ethnic minority in the country. Unfortunately in the Czech soul, especially but not exclusively in the older generation, there is still a strong adversity towards this ethnic group, especially in times of economic crisis and social friction, which leads to real racist incidents (extremist manifestations, violence, and intolerance). Here, I think, the road will be a long one. However, there are signs of an awakening of consciences. It is important to note, for example, a renewed interest on the part of the younger generation towards the Beneš Decrees, under which three million ethnic Germans Czechs, who lived in the Sudetenland for centuries, had to abandon their homes and their property in name of a kind of collective guilt of the German people. In reality, the vast majority of these had nothing to do with Nazism. Today, new generations want to know how things really went and are willing to acknowledge the faults of those Czechs who often took advantage of those tragic moments to plunder and abuse personal accounts for private gains. On the other hand we have the older generation which is reluctant to question the legality and justice of those measures which are still a source of great political friction between the Czech Republic and Germany. Lately, the controversial but well received Czech-Polish film Hořicí Ker (The Burning Bush) deals with this historic event.

Do Czech schools have programs on the Memory of the Righteous? Are there associations and organizations particularly active in teaching or working in the broadest sense to teach citizens?

There are many activities in this regard, especially in schools where there are meetings with survivors, or the Memorial travel in Terezin. This is due mainly to the strength and determination of many Holocaust survivors who are committed to spread the historical memory for years and years.  One of these people, Marta Kottová, will participate in our conference. Particularly significant is the work done by Eva Lustigová, daughter of the famous Czech writer Arnost Lustig of Jewish origin who wrote about with great depth the harrowing experience of the concentration camps. In addition, every year, a train of memory traces the path from the collection station in Prague - Bubny to Auschwitz.

Would you like to say something about the Czech Righteous?

To date, 109 people have been recognized as Righteous of the Czech Republic, but not all the statistics accept this number as some report that there were 119 Righteous. The difference is due to the dissolution of the Federal Republic of Czechoslovakia from which they originated the current Czech and Slovak Republics. Some, therefore, also consider the Righteous of Czech origin who have helped in areas of Ukraine during the war were part of Czechoslovakia, or the Righteous of the Czech-German origin. Let's say, however, that the Righteous are officially 109 Righteous.  The most famous Righteous are certainly Přemysl Pitter and Olga Fierzová, then also Milena Jesenská. Also recently recognized is Karel Košvanec, who snuck hidden food to the prisoners of the ghetto of Terezin, and Antonin Kalina, a political prisoner who, risking his own life, saved a thousand Jewish children. His memory has been recognized thanks to a new book by Stanislav Motl.