6 March: the party to thank the Righteous

at Teatro Franco Parenti in Milan 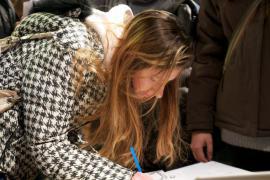 A girl signing our Call. Picture by Simone Bettini for Gariwo

A marathon was set up by Gariwo, the forest of the Righteous, to say thanks to the Righteous on March, 6 from 4 to 8 pm at Teatro Franco Parenti of Milan (free entrance) with music, pictures and testimony to remember the Righteous, the people who have opposed and still oppose crimes against humanity and totalitarianism. An afternoon of celebrations, where the tales of the witnesses and the reports of prominent figures of culture and art have alternated with the screening of videos and the reading of excerpts from Gabriele Nissim's latest book, Senseless Goodness.


The event is comprised within the range of the international events held by Gariwo to support the call for the European Parliament to establish a European day of the Righteous. After the February meeting of Prague with the dissidents of Charter 77, the event in Milan, where the first Garden of the Righteous of Milan was set up, will take place on next 30 March in the prestigious premises of Warsaw's Royal Palace.