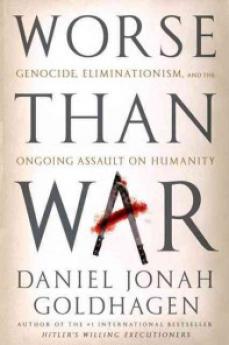 We invite you to read some of Gariwo's recommended publications. Below are reviews of suggested reading material.


Daniel Goldhagen, Worse than war, Public Affairs, 2010 Goldhagen's thesis is that the mass murder policies don't stem from a sort of a moral and cultural decadence of the perpetrators, but instead descend from rational political calculations. Goldhagen recounts the dehumanization which precedes genocide and explains that mass murder is onlu a means of a pseudo-phenomenon of our time dating back to Enlightenment: eliminationist politics.
review

Sergej P. Mel'gunov, Red Terror in Russia, Hyperion, 1975
The essay comes 50 years after its first publication iin Berlin. It denounces "Stalin's red terror" through detailed descriptions of what happened in the Soviet prisons, as well has horrifying statistic.
reviews

Irène Némirovsky, French suite, Knopf, 2006
The last diary of the writer who was deported to Auschwitz, published 60 years later by her daughter Denise. The book, unfinished, describes the hurried runaway of the people from Paris after they got to know the Germans had overcome the Maginot line and tells about the love story between the Frenh woman Lucile and the German lieutenant who seized her flat.
review

Do you wish to suggest a book to us or send us a comment? Write us at redazione@gariwo.net