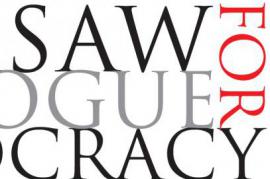 On 25-26 October 2013 the second edition of the Warsaw Dialogue for Democracy will be held. The first edition was organized by the Ministry of Foreign Affairs and the Institute of National Remembrance on 14-15 December 2012 in Warsaw. The initiative is aimed at all individuals, institutions and organizations engaged in promotion of democracy, rule of law and human rights.
The 2013 edition of the WDD underlying theme is "Online and Offline. From virtual reality to real democracy." The conference will focus on the influence of new communication technologies on the creation of environments conducive to the development of democracy. Grass-roots level and government driven processes will be discussed in a regional and global context. The questions of transitional justice, reconstruction of civil society and education for democracy as well as the role of women in societies in transition will also be discussed.


The opening session will be followed by four thematic debates entitled:
Democracy – dream and reality
Transitional Justice - archives and documentation in times of transition
Democracy online versus democracy offline
From Women's Activism in Transitions to Effective Political Participation


The conference will be opened by Radosław Sikorski, Minister of Foreign Affairs. Dr. Łukasz Kamiński, President of the Institute of National Remembrance, will chair a session on transitional justice .