Uniting the Arab world against ISIS

Messages from the civil society and religious authorities 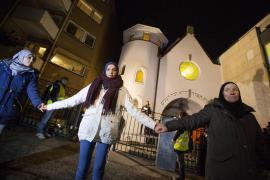 The human chain around the Oslo Synagogue (Reuters/Contrasto)

“Senseless Goodness is the title of a book by Gabriele Nissim that tells about a judge who devoted his life to searching for unknoen people who rescued Jews during the Holocaust. Nonetheless it is also what led 1,300 young Muslims to create a human chain around an Oslo synagogue in sign of solidarity with the Jewish community after the attack of Copenhagen, in which a young Dane of Palestinian descent killed two people. Such actions, which would deserve to be in the breaking news, remain uncovered by most media. They are conciliating actions that show people in the world that there are many more defenders of peace than of war, and it is possible and desirable to promote intercultural coexistence. Actions of senseless and anonymous goodness that we must know, because these people, ‘who do not know about each other’ (Borges), are saving the world.”

The reference is to what has been called as “peace ring”, the human chain formed by over 1,000 Muslims on 21 February in Oslo to condemn the coup of Copenhagen and any kind of religious violence.

So, if we notice positive signals from the civil society, for the first time a strong message comes from the religious authorities of the Muslim world, too. The great imam of Al Azhar, the great Sunni religious centre, Ahmed al-Tayyeb, in fact adressed scholars, academics and teachers with a call to recognize the importance of recognizing the need for a radical reform of religious teaching, to contain the spreading of extremism and countering jihadist thought on the theological level.

The imam spoke at a seminar held in the Mecca on the theme “Islam and the fight against terrorism” by underlining the fact that extremism is the product of a bad interpretation of the Koran. “The only hope to recover the unity of the Muslim nation – he said – is to counter in schools and universities this trend to label Muslims as unreligious”. The immediate response would be to create a special curriculum to correct “wrong and ambiguous concepts”, followed by a conference of Muslim scholars to strengthen the common values of Islam.

At the conference a message from the new Saudi king Salman was read, who stated firmly that there must be ‘zero tolerance’ against jihadists, “who are a threat to the Muslim community and the entire world”.