the intellectuals committed to the subject of the Righteous 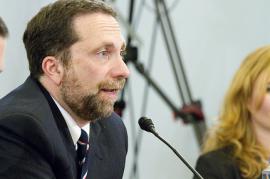 Robert Satloff, one of the members of the Gariwo International Scientific Committee

We introduce you to the members of our International Scientific Committee who through their work help stimulate and enrich the debate on the Righteous by identifying deepening tools, offering reflections, and suggesting significant figures, also not very well known, which we can develop our research and popularization activity on.

GARIWO INTERNATIONAL SCIENTIFIC COMMITTEE
•Avraham Burg
Israeli politician and essayist. President emeritus of the Knesset, he has been the President of the Jewish Agency and the World's Zionist Movement

as well as the Vicepresident of the World's Jewish Congress and among the founders of the pacifist movement Peace Now. He has written many articles and books including Defeating Hitler.

•Antonio Ferrari
Journalist, editorialist, and special correspondent of the "Corriere della Sera", he has been committed for 26 years to cover the Middle East by following the Israeli-Palestinian issue, the wars in Iraq, the difficult balances in Lebanon, Syria and Jordan.

He is the Director General of the "Sacra Famiglia" (Sacred Family) Foundation. He has been a consultant to the UNEBA and a member of the board of directors of the "Caritas" Foundation for 10 years.

• Adriano Dell'Asta
Professor of Russian language and literature at the Università Cattolica of Brescia and Milan. Vicepresident of the Fondazione Russia Cristiana (Christian Russia Foundation), he is a member of the International Scientific Committee of the magazine «La Nuova Europa».

He is a member of the Committee of Consultants of the international theological review "Communio" and of the magazine of the Pontifical Catholic University of Chile, "Humanitas". In his research activity he particularly deepened some core issues of the Russian culture in the XIX and XX Centuries

• Konstanty Gebert
Journalist and Jewish activist from Poland, he is one of the most important war reporters of various Polish dailies. In 1978 he was one of the main organizers of the so-called Flying university, a secret high education institution teaching the people on various subjects forbidden by the Polish Communist regime. In 1980 je joined the Solidarność Union.

In 1989 he was one of the journalists accredited to the Polish Roundtable. Since 1990 he has been a member of the Polish Christian-Jewish Council. Since 1992 he has worked for "Gazeta Wyborcza", one of the greatest and more significant Polish dailies. For this newspaper he has been a correspondent during the war in Yugoslavia. In 1992 and 1993 he was also a consultant to Tadeusz Mazowiecki, the first Polish Head of government after the fall of the Wall and Special rapporteur of the UN Human Rights Commission for former Yugoslavia. In 1997 he also ran the Jewish-Polish monthly “Midrasz”.

• Arrigo Levi
Personal advisor to the President of the Italian Republic, journalist and writer. He was jailed during Peron's dictatorship in Argentina in 1945.

He has been an editorialist of the Corriere della Sera, director of La Stampa, columnist of Newsweek and The Times. He authored numerous tv programmes for Rai and Canale 5. He has written many essays among which Il comunismo da Budapest a Praga (Communism from Budapest to Prague), 1969, Russia del Novecento - Una storia europea (Twentieth Century Russia - a European story), 1999 , Da Livorno al Quirinale (From Livorno to the Quirinale palace), 2010.

• Salvatore Natoli
Professor of Theoretic Philosophy at the Università degli Studi di Milano - Bicocca, he recently dealt with the relationship between language and ethics.

He has taught Logics at the faculty of Literature and Philosophy of the University of Venice and Philosophy of Politics at the Faculty of Political Science at the Università degli Studi di Milano. He has worked with many magaszines, including"Prospettive Settanta", "Il centauro", "Democrazia e diritto", "Religione e società", "Bailamme" e "Metaxù".

• Mordecai Paldiel
Israeli, the director of the Righteous Department at Yad Vashem (the Holocaust Memorial of Jerusalem) until recently, he now runs the "Special Projects" of the Wallenberg Foundation and teaches at the Yeshiva College (with the Yeshiva University) and at the Queens College (CUNY) of New York. He has long worked with Moshe Bejski who had ran Yad Vashem's Righteous Department for 30 years before him.

He wrote several books including The Path of the Righteous: Gentile Rescuers of Jews during the Holocaust, Whosoever Saves One Life: The Uniqueness of the Righteous Among the Nations, Sheltering the Jews: Stories of Holocaust Rescuers and German Rescuers of Jews: Individuals versus the System. He has recently taken a stance in the international debate on the impossibility for the Jews to receive the title of "Righteous among the nations".

After the splitting of Slowakya, he took on the same role of Foreign Minister for the Czech Republic in October 1998. He has taught in many American universities and at the Charles University in Prague. In 1993 he joined the Center for Threoretical Studies, a research center which depends jointly from the Charles University and the Czech Academy of Sciences, whose President is Ivan M. Havel.

Full professor of International Relations at the Università Cattolica del Sacro Cuore. He is a member of the Group of Strategic Reflection of the Foreign Ministry, he is a partner of the Society for the Study of the Spreading of Democracy (Società per lo Studio della Diffusione della Democrazia, SSDD) and the President of the scientific committee of the foundation “Il Vicino Oriente” (the near East).

For nine years he has run the Master in Markets and Institutions of the Global System with the Alta Scuola di Economia e Relazioni Internazionali (ASERI) and since 2005 he has been the Program director of the Master in Economics and International Policies (a joint venture between ASERI and USI).
He is a member of the LSE IDEAS Advisory Board (Center for Diplomacy and Strategy at the London School of Economics). Since 2008 he has been an editorialist of the daily newspaper "La Stampa" and from 1999 to 2008 he has been a leading writer of International Politics of the daily "Avvenire".

• Liliana Picciotto
In charge of research with the CDEC Foundation (Centre of Contemporary Jewish Documentation, Centro di Documentazione Ebraica Contemporanea). She wrote several books including I Giusti d’Italia. I non ebrei che salvarono gli ebrei 1943-1945 on the Italian Righteous among the nations and she co-authored the movie Memoria, a collection of interviews to the last survivors of the Auschwitz extermination camp.

• Robert Satloff
American writer of Jewish descent, he is the executive director of the Washington Institute for Near East Policy (WINEP) and an expert of Arab and Islamic politics and of US policies towards the Middle East. In 2007 he published Among the Righteous. Lost stories from the Holocaust's Long Reach into Arab Lands.

In particular he deals with American politics, diplomacy, the peace process and democratization in the Middle East. The author and editor of nine among books and essays, his opinions on Middle East often appear in the main American newspapers including the "New York Times", "Wall Street Journal", "Washington Post" and "Los Angeles Times."

The inventress of the "International Festival of Jewish Literature", she signed more than fifty productions and she is personally committed to the development of the town, by reviving its cultural panorama.