The collapse of the Walls. 20 years later 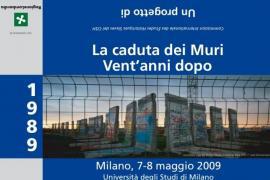 The poster of the convention

Università degli Studi di Milano (University of Milan) 7th-8th May
In the 20th anniversary of the collapse of the Berlin wall, some of the major protagonists of the events of those years marked by the ideological and military confrontations of the second world war assess the process of reunification of the European continent. Meeting organized by the Branch of the European Commission.

Speeches, among others, by:
Lech Wałȩsa, the leader of Solidarność, the historic Polish union which lead the Danzig revolt
Václav Havel, writer, playwright and first President of the Federation of the Czech and Slovak Republics in the aftermath of the wall's collapse
László Rajk, founder of the Association of Democrats in Hungary
Rudolf Seiters, then German Minister of the Interior

The photographic exposition "the reunification of our continent" will be open until 20th May in the hall before the main lecture room.
Timetables: Monday-Friday from 9 to 19