Minister Fedeli signs the Decree and the Memorandum with Gariwo

initiatives in the schools to popularize the examples of the Righteous 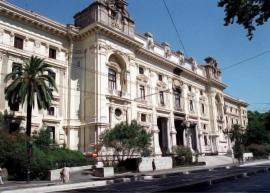 The building of the Italian Minister of Education, University and Research

Italy's Minister of Education, University and Research, Mrs. Valeria Fedeli, signed the Decree that establishes the Working Group, composed of representatives of MIUR, Gariwo and the world of School and University, which will have to plan the activities related to the celebrations of the Day of the Righteous of the Humanity, on 6 March every year.

The recurrence of 6March was recognized as civil feast by Italy's Parliament, with Law no. 212 of 20 December 2017, to remember the women and men who have saved human lives during cases of genocide and crimes against the Humanity, safeguarding human dignity under the various forms of totalitarianism, and defending human rights all over the world.

The Decree was signed in conjunction with the Memorandum of Understanding signed by Minister Valeria Fedeli and Gariwo Chairman Mr. Gabriele Nissim for the “popularization of knowledge about the Righteous and the memory of Good. On a three-year timescale, the Memorandum provides the realization of educational activities and materials for the schools of every grade, training for male and female teachers the the research for innovative forms and languages to pass the educational message of the Righteous on to the younger boys and girls.

“This year, for the first time, thanks to the approval of the Parliament, we celebrated a Day of the Righteous officially recognized as Italian civil feast" – has said Minister Valeria Fedeli -. The world of education, too is thus called to take up an even greater responsibility, the one of actively remembering women and men steadily committed in favour of the weaker, against savagery, abuse and violence and passing on their example. They are unique people, different from each other for geographical origins, language, religious belief, but all having in common a deep sense of humanity, that pushed them to put their lives, status and well-being to risk for a loftier cause: the rescue of other human beings. A cause, of which we all, women and men, need to feel a part, on a daily basis.

“The signatures to the decree establishing the Day of the Righteous and the Memorandum of Understanding with Gariwo represent a new and important achievement for all those who are committed to spreading the values of personal responsibility, dialogue and plurality, against selfishness, discrimination, the culture of hate and the enemy that seem to prevail in our times - has said Gabriele Nissim -. This is why, now more than ever, it is indispensable to bring about the example of the Righteous, above all among the younger generations. In this sense, these actions taken by MIUR are really crucial, and we owe this Institution the sincerest thanks from Gariwo and the many people, who, all over Italy, are pursuing this educational and cultural project”.