In Yemen, one of the poorest countries in the Arab world, a civil war has been raging since 2014, killing more than 100,000 Yemenis, according to the Armed Conflict Location & Data Project (ACLED). These data include 12.000 civilian deaths in directly targeted attacks and 7500 children killed or wounded. Bombs have destroyed many Yemeni cities. As of December 2020, the United Nations said the war has already caused an estimated 233,000 deaths, including some from indirect causes, such as lack of food, health services, and infrastructure.
The conflict involves the Iranian-backed Houthi armed movement, which controls the capital Sanaa and much of northwestern Yemen, and an international coalition led by Saudi Arabia in support of the central government. In 2019, the United Nations declared that both the Houthis and the government had committed war crimes, such as arbitrary killings, rape, torture, and recruitment of child soldiers. Genocide Watch issued an emergency warning of genocidal risk to the local population, which the Saudi-led coalition bombed and deprived of food, water, and essential services. 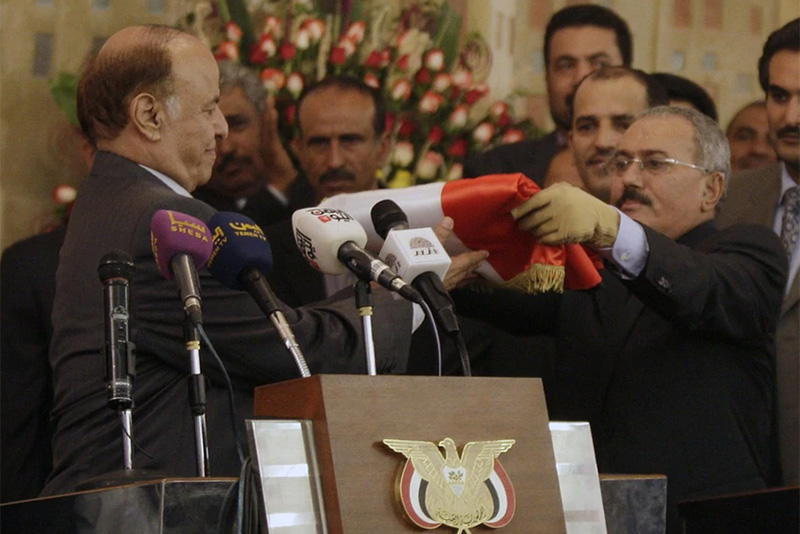 How the war started

The war has its roots in the failed political transition that followed the 2011 protests within the so-called Arab Springs. It began in late 2014, primarily involving the Yemeni government led by Abdrabbuh Mansur Hadi and the armed Houthi movement, along with their supporters and allies. Both forces claim to constitute Yemen's official government.
Yemen’s newly appointed president Hadi took over from Ali Abdullah Saleh in 2011. Amid protests against the longtime dictator, he faced a series of highly complex issues that undermined national security: jihadist attacks, the growth of the separatist movement in the south of the country, the security personnel’s loyalty to the former president, endemic corruption, unemployment, and food insecurity.

The Houthi movement (officially known as Ansar Allah), which supports Yemen's Shia minority and led a series of protests against Saleh's regime during the previous decade, took advantage of the new president's weakness by occupying parts of Saada province and surrounding areas.
Disillusioned with the transition and reeling from an economic crisis, many Yemenis, including Sunnis, supported the Houthis. Between late 2014 and early 2015, the rebels gradually captured the capital Sanaa. The Houthis and security forces loyal to Saleh - who was thought to have backed his former enemies in an attempt to regain power - then attempted to take control of the entire country, forcing Hadi to flee abroad in March 2015.

Alarmed by the rise of a group they believed to be backed militarily by regional Shia power Iran seizing a large part of the country, Saudi Arabia and eight other countries (mostly Sunni Arab states) began an air campaign to defeat the Houthi, end Iranian influence in Yemen, and restore Hadi’s government. The coalition received logistical and intelligence support from the United States, United Kingdom, and France. 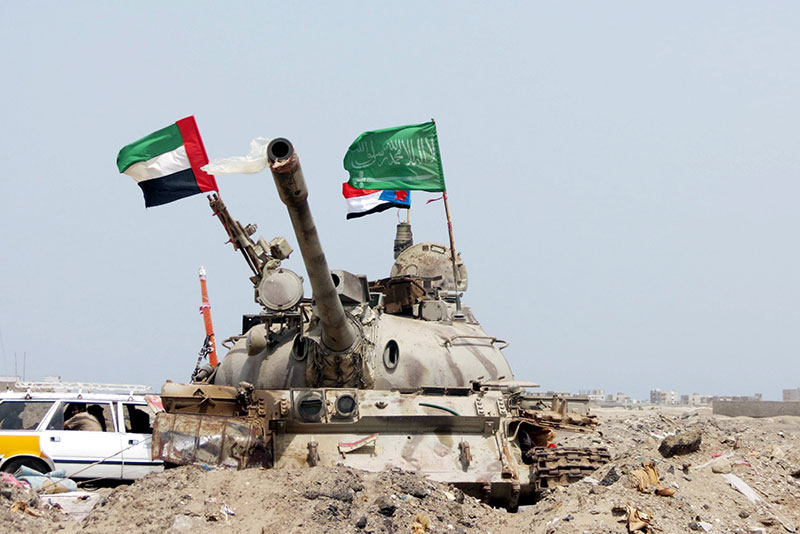 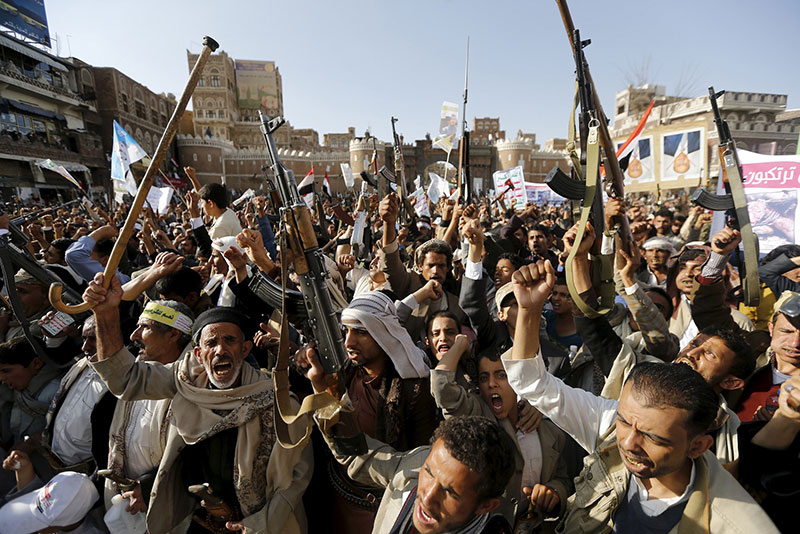 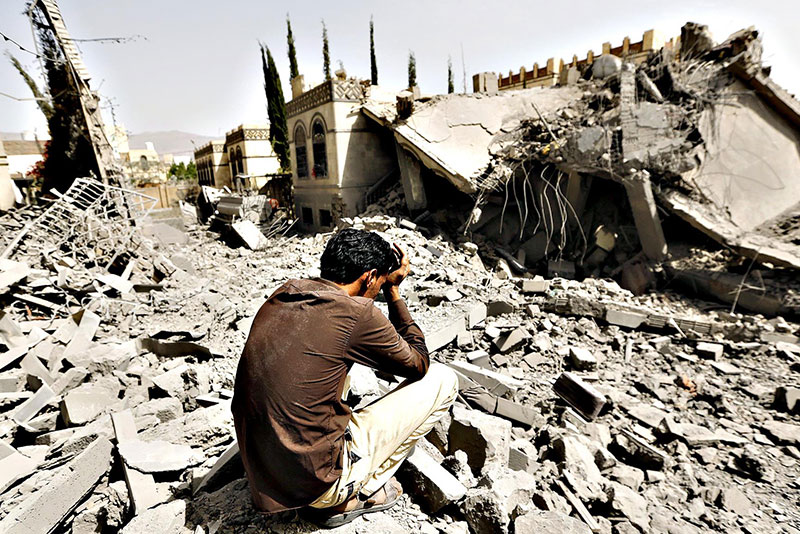 Saudi officials predicted a flash conflict in Yemen that would last a few weeks at most. The coalition’s ground troops landed in the southern port city of Aden in August 2015: in a few months, they helped drive the Houthis out of much of the south. Hadi's government settled temporarily in Aden, from where it struggles to control the country, and the president continues to reside in Saudi Arabia.
The Houthis keep controlling Sanaa and northwestern Yemen. They also seized the country's third-largest city, Taiz, and launch regular attacks toward Saudi Arabia with ballistic missiles and drones. In September 2019, attacks on Saudi oil production facilities disrupted roughly 5% of the global oil supply. According to Saudi Arabia and the United States, Iranian forces lead these attacks.

Meanwhile, al Qaeda militants in the Arabian Peninsula (AQAP) and Islamic State rivals seized areas south of the country, where they carried out deadly attacks, particularly in Aden. In 2017, with the official goal of stopping arms smuggling from Iran to the Houthis, the Saudi-led coalition tightened its blockade of Yemen. The restrictions led to substantial increases in food and fuel prices, helping to push more people into food insecurity. Meanwhile, in November 2017, Houthi fighters launched an operation to take total possession of the capital. During the fighting, a sniper killed former President Ali Abdullah Saleh.

Much hope was given to the Stockholm talks, held in December 2018. The agreements included a ceasefire on the strategic maritime city of Hudaydah, whose Red Sea port provides the livelihoods for two-thirds of Yemen's population. The agreements are precarious, and the UN has warned that destruction of the port would result in the deaths of hundreds of thousands of people struck by famine.

Meanwhile, the United Arab Emirates abandoned the coalition and officially withdrew from Yemen. In August 2019, fighting broke out in the south between Saudi-backed government forces and a southern separatist movement, the Southern Transitional Council (STC), whose activities the UAE itself seems to be supporting.
Despite the Stockholm agreements promoted by the UN, a political solution to the conflict seems far away. In Spring 2020, Saudi Arabia announced a unilateral ceasefire due to the coronavirus pandemic. The Houthis rejected it, demanding the lifting of air and sea blockades in Sanaa and Hudaydah.

On January 11, 2021, the Trump administration announced that it would list the Houthi rebels as terrorist organizations. Diplomats, members of Congress, and aid organizations fear this action might further inflame the conflict, overturn UN peace talks, and exacerbate the country's humanitarian crisis. 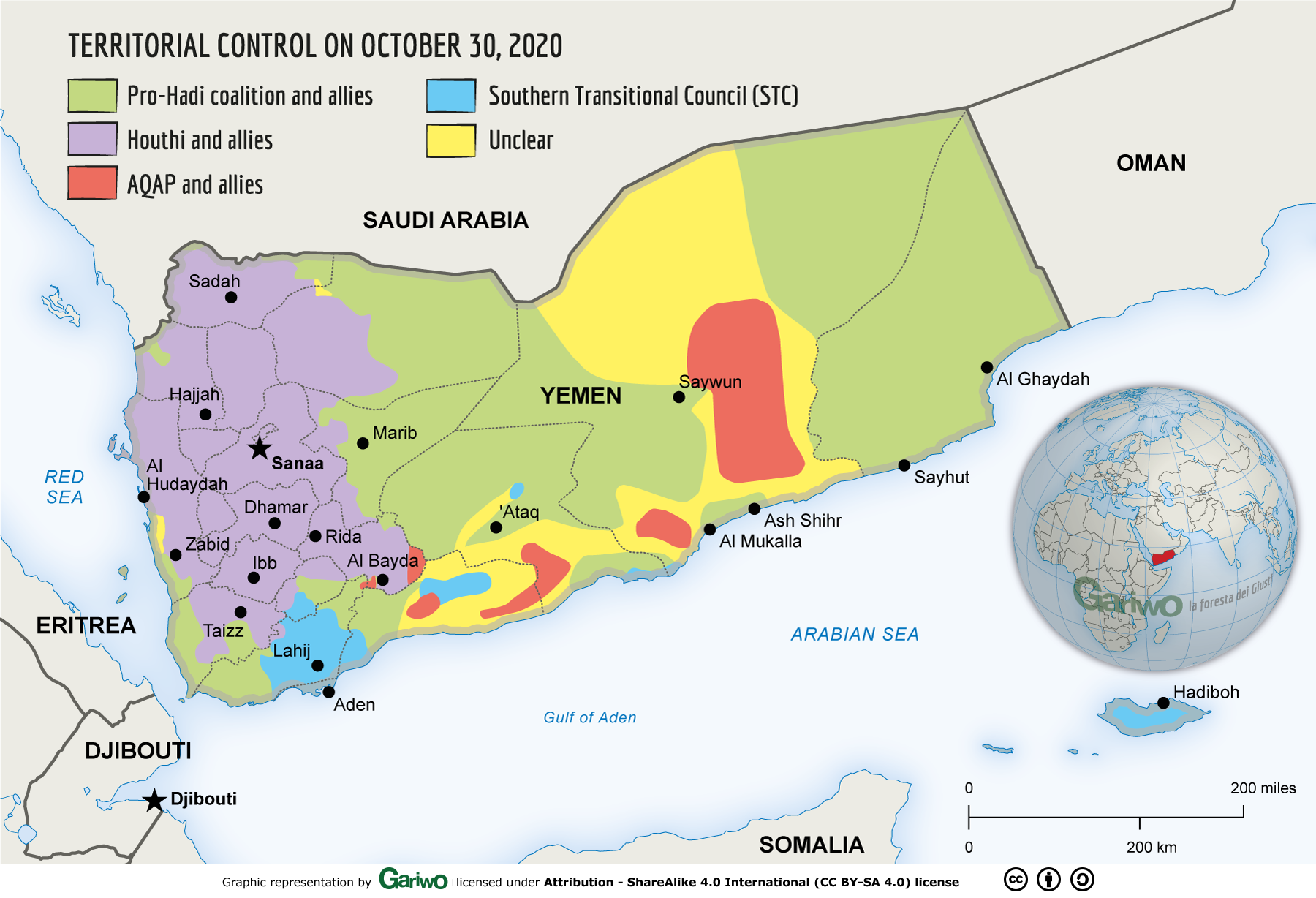 Between May 2016 and April 2020, a report by Mwatana – one of the leading Yemeni humanitarian organizations – has documented 1,605 cases of arbitrary detentions, 770 cases of enforced disappearance, and 344 cases of torture. The Yemeni government, the Houthis, and affiliated armed groups are responsible for these crimes. Both sides are also accused of violently attacking, raping, and torturing migrant workers and asylum seekers from the Horn of Africa. The situation worsened with the pandemic: both the government and Houthi leaders accused African migrants of carrying cholera and COVID-19.

Meanwhile, twenty million Yemenis lack regular nutrition, and ten million are on the brink of starvation. More than two million children need treatment for serious diseases linked to malnutrition. Yemen is experiencing the largest cholera epidemic in the world.
Yemen’s health care system is virtually destroyed, and hospitals are turning away patients due to a lack of basic supplies. Based on epidemiological projections, UN officials fear the coronavirus pandemic could affect nearly 16 million people in Yemen, 55 percent of the population, while it is impossible to have firm data. 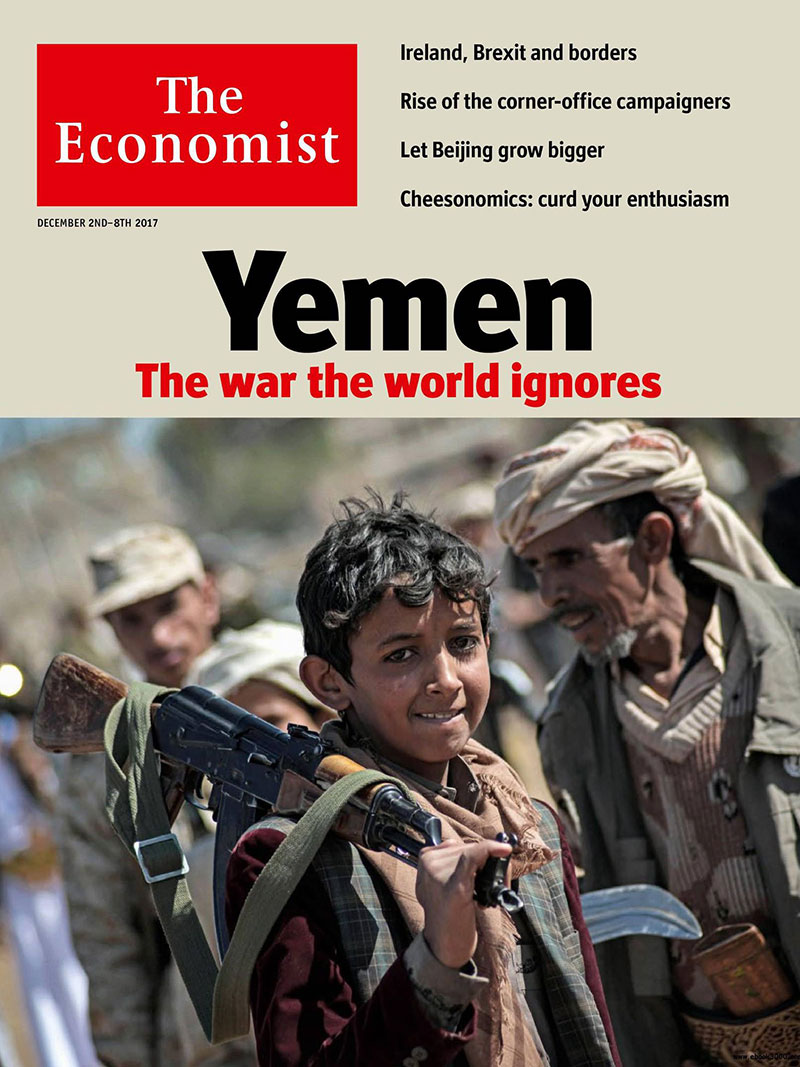 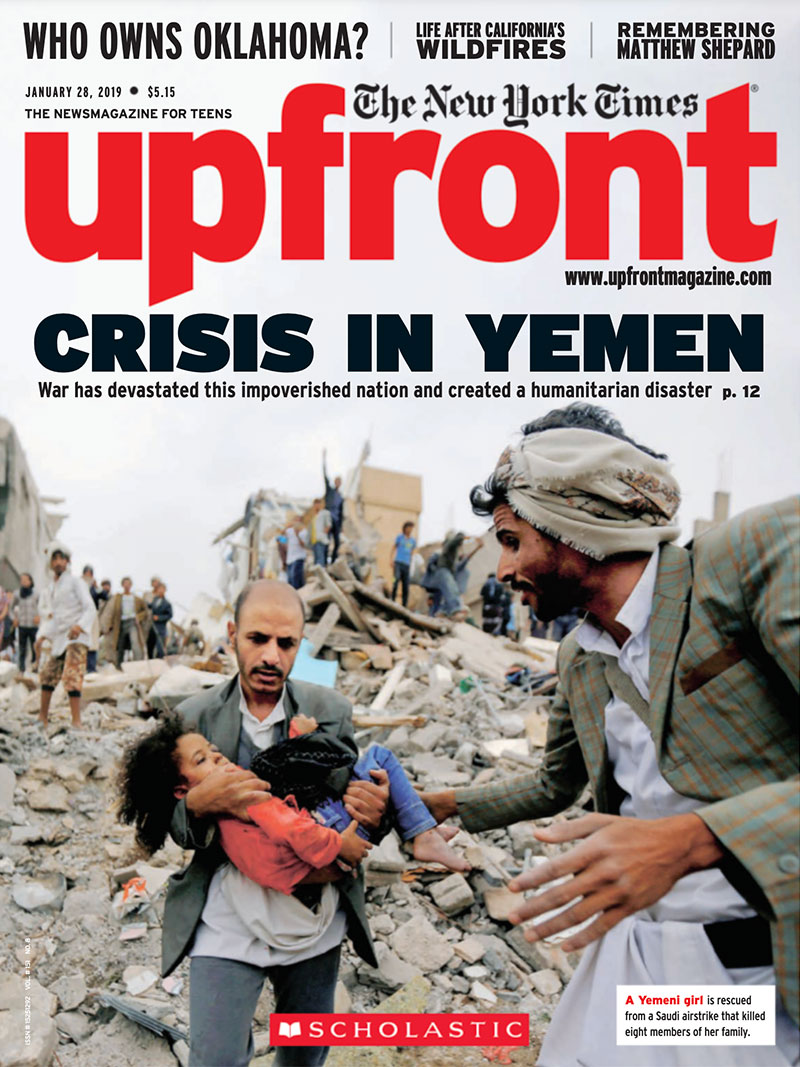 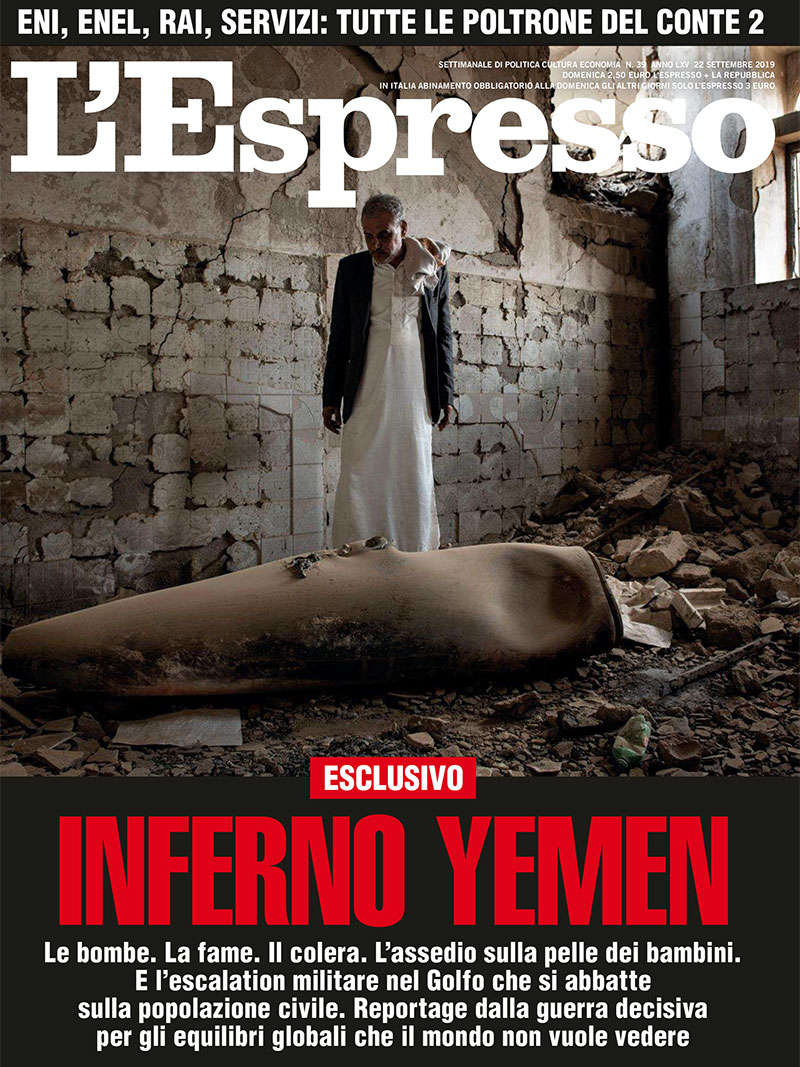 Amnesty International’s appeal: stop the flow of weapons to Yemen

According to Amnesty International, costly public relations campaigns and clever diplomatic actions by Saudi Arabia have concealed the main abuses suffered by the Yemeni people in recent years. For the international organization, stopping the supply of arms is the only effective action to stop human rights abuses in Yemen.

Countries such as Germany, Belgium, Netherlands, and Norway have begun limiting arms sales to the coalition. Others, such as the United States, the United Kingdom, Spain, and Canada, continue to supply arms. 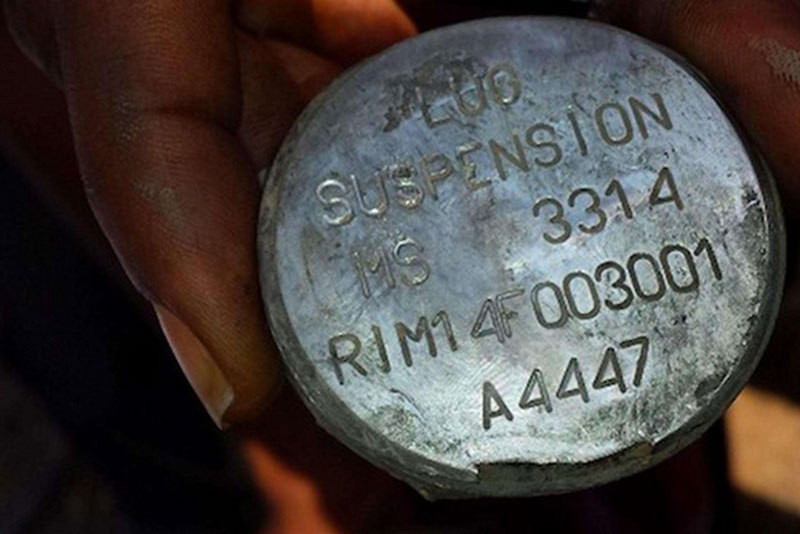 Fragment of a bomb produced in Italy by the company RWM Italia (whose production code is A4447), used in Yemen in a raid that killed at least 6 people, including 4 minors. 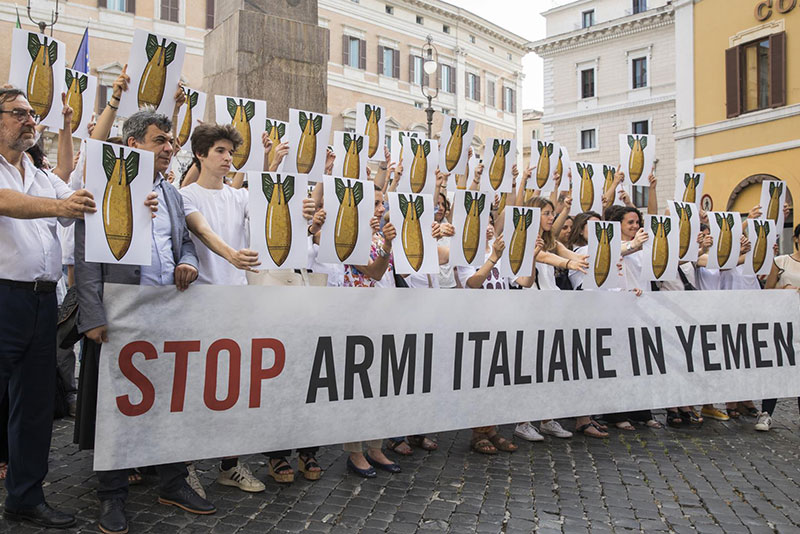 July 9, 2019: a demonstration at Montecitorio against the sale of Italian arms to the Saudi coalition.

According to Osservatorio Diritti, from January to June 2020, the Italian government sent semi-automatic pistols and rifles worth €5.3 million; in the same period, the United Arab Emirates received weapons from Italy worth €11 million. Yet, in July 2019, the Chamber of Deputies had approved a motion committing the Italian government to suspend the export of aerial bombs and missiles to these two states for 18 months.
On December 22, 2020, the Chamber voted on a resolution committing the Italian government to maintain the suspension beyond the 18-month deadline and “to evaluate the possibility of extending this suspension to other types of armaments until there are concrete developments in the peace process”.

On January 29, 2021, by accepting the Parliament’s invitation and the appeals from the world of association, the government of Prime Minister Giuseppe Conte decided to revoke the current authorizations for the export of missiles and aerial bombs to Saudi Arabia and the United Arab Emirates.

According to Oxfam, Italy could play a crucial role “through a greater humanitarian and diplomatic commitment, by supporting the opening of effective and independent investigations into violations and crimes committed in Yemen by the parties in conflict”.