Gulags are the concentration camps created and run by the Soviet regime from 1918 to 1987, to punish political opponents and as instruments of a terror policy – practiced in the USSR to keep the power and the control on the whole society. The system started being reformed only after the death of Stalin in 1953, but ultimately disappeared only in 1987, with Michail Gorbacev.

Creation and development of gulags

Gulag is the acronym, introduced in 1939 for Gosudarstvennyj Upravlenje Lagerej (Central Direction of the Lagers). In 1918, with the start of the civil war, a wide network of concentration camps for political opponents was created. In 1919 the forced labour branch was established. Forced labour was meant as a means of social redemption by the very Soviet Constitution. Besides their economic and punitive function, some lagers also had the function of physically elimination of the deportees. Anyway, the general conditions in which inmates were forced to act made it obvious that there would be many deaths by starvation.
Scattered in the least hospitable places of the USSR, from the Solovki Islands to the Kolyma, a Siberian mining district, the Soviet lagers were 384. Besides the lagers in the strict sense of the term, also the “special settlement areas” were established, for the colonization and exploitation of the USSR’s most inhabitable areas.

The Gulag system characterized the whole Leninist and Stalinist eras and started undergoing some reform only after Stalin’s death in 1953. In 1956, there were 37 left. The closure of the entire “Archipelago” – an expression we owe to writer Aleksandr Solzenicyn, author of The Gulag Archipelago, a monumental and fundamental work published in 1971, would occur only in 1987, under Michail Gorbacev. 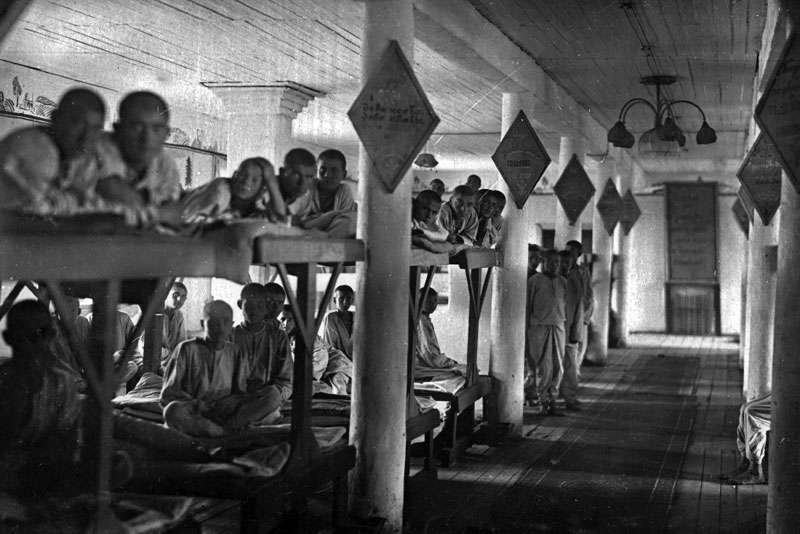 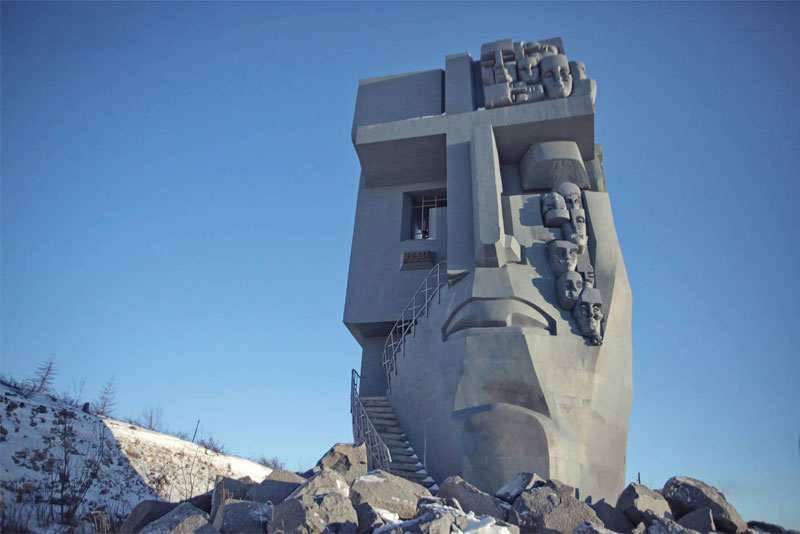 The inspirational ideology for the Soviet power was Marxism-Leninism, that aimed at creating a new society, eliminating first of all those social group, which were considered as class enemies. The regime set up in the USSR featured the characteristics of a true totalitarian system, where the power is held by a party that identified itself with the State and acted according to a ruling ideology, setting the goals to be achieved.
The mass society was completely controlled by the media and the omnipresent secret police, the NKVD. The most cost-effective way to keep the control on the population and eliminate dissent was terror, which hit in one wave after another all the components of the Soviet society, often in an absolutely arbitrary way. It is the phenomenon of the objective enemy, i.e. an enemy which is not defined based on its hostility toward the power holders, but based on an arbitrary choice, aimed at keeping the power on the entire society.
Lenin, in a letter of 1922, wrote: “Tribunals must not eliminate terror (…)  The principle of terror must be rooted and legalized without any ambiguities or embellishments”. The same line would be followed also by Stalin. The revolutionary tribunals first, and then the so-called “trojkas” (triumvirates of politically appointed magistrates), had the task of sentencing to lager deportation both the common criminals and the counter-revolutionaries. For the latter, there was a precise article of the Criminal code, art. 58. The Soviet regime considered common criminals as “socially close”, comrades who had made mistakes and could be redeemed. On the contrary, those sentenced under art. 58 were considered as “socially estranged”, irredeemable enemies, for whom the lager was the ultimate destination. 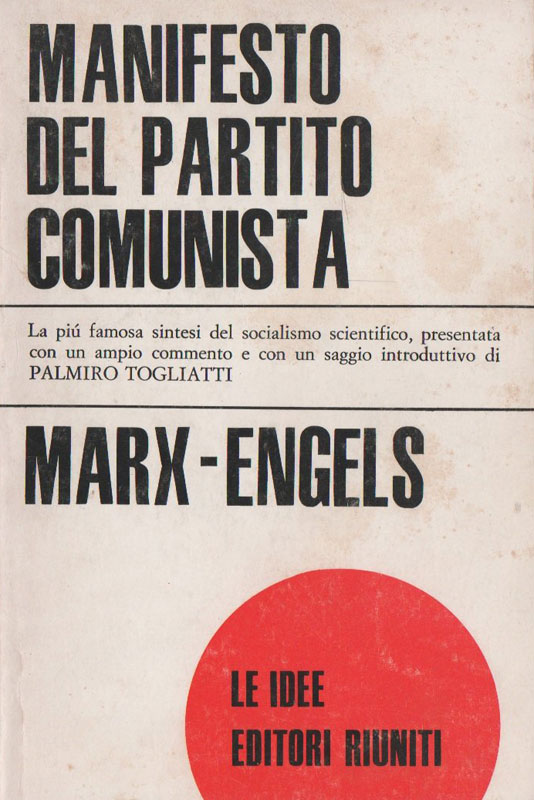 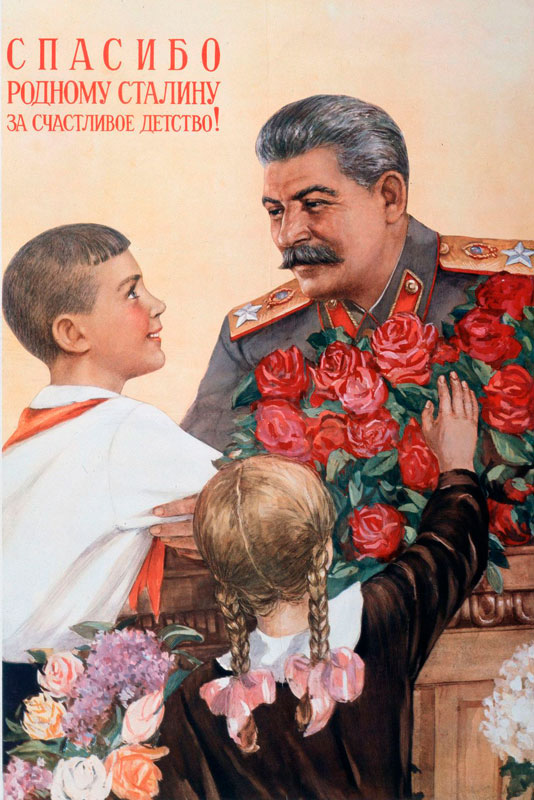 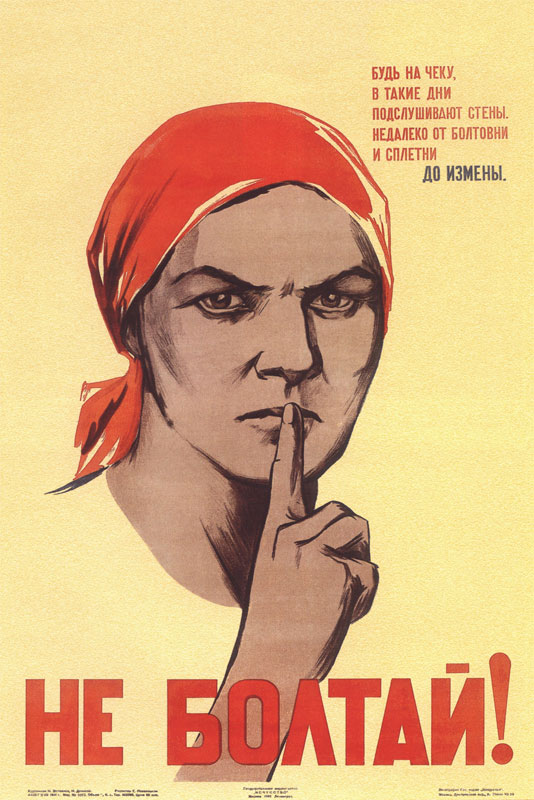 The authors and executioners of the plan

The responsibility for such a concentration system, which used terror and imprisoned people from all social classes, is both of Lenin, who had been its initiator, and Stalin, who with the start of the five-year plans broadened and enhanced the forced labour system. With them, other bearers of responsibility are also the leaders, to whom the system management was assigned. They include Lavrentji Beria, one of the most ferocious Stalin collaborators, who at the end of the Thirties even set up a secret laboratory to test the effect of chemical poisons on the inmates. This project saw also the participation of the powerful political police, the NKVD, and the whole Soviet judiciary system. 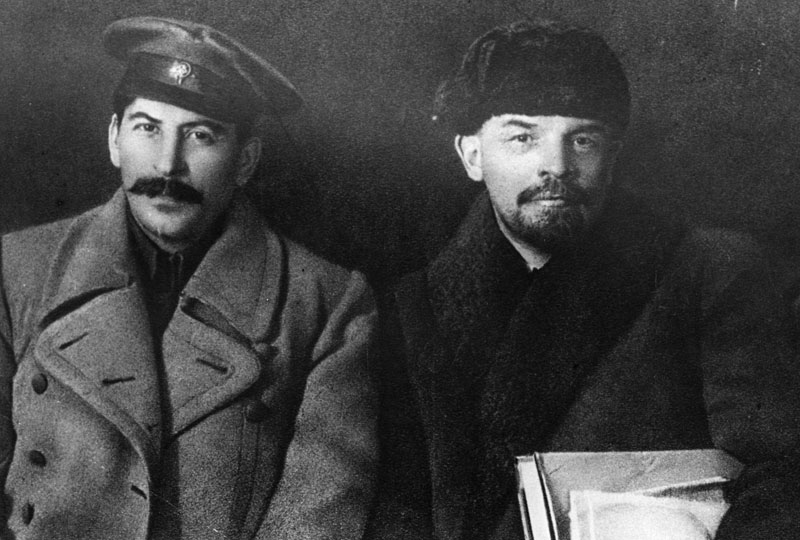 Life in the gulag

First entered the gulag the natural enemies of the Soviet state, the class enemies: the Russian nobility, the entrepreneurs, the land owners, the Orthodox clergy and, in general, all the groups that were considered as privileged. Afterwards, purges concerned all branches of the Soviet society, including war prisoners who had escaped the Nazi lagers and the specialists from various sectors, necessary for the lagers’ productivity. A special mention needs to be done for the hostages, chosen among people of high social status, with the aim of blackmailing relatives and friends.

Prisoner of Hitler and Stalin

Inside the camps, men and women worked at inhuman pace, controlled by an internal hierarchy of squad leaders chosen among the common criminals. The construction of dams, channels, roads, new urban settlements, mining and wood logging were some of the most frequently activities managed through forced labour. Often extreme climate conditions, perennial hunger, arbitrary shootings, the exhausting work pace aimed at impossible production goals, the steady psychological violence to the purpose of annihilating individual will, were the constant characteristics of the Soviet gulag.

Prisoner of Hitler and Stalin 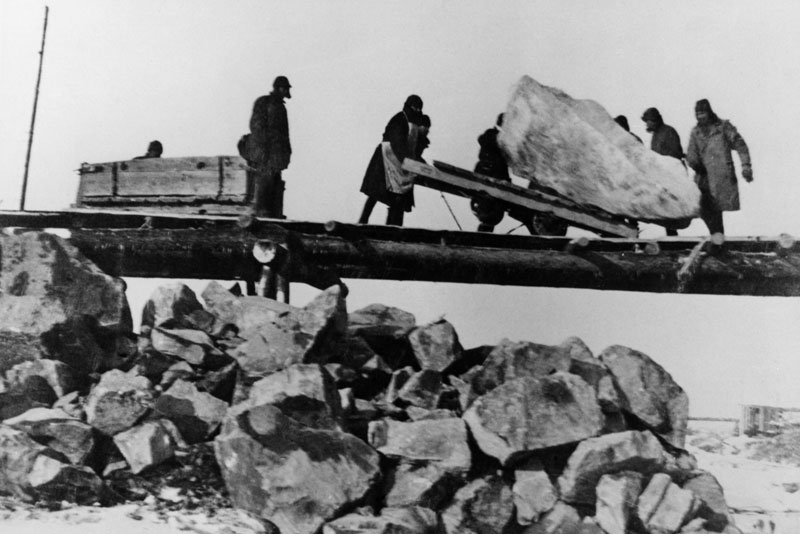 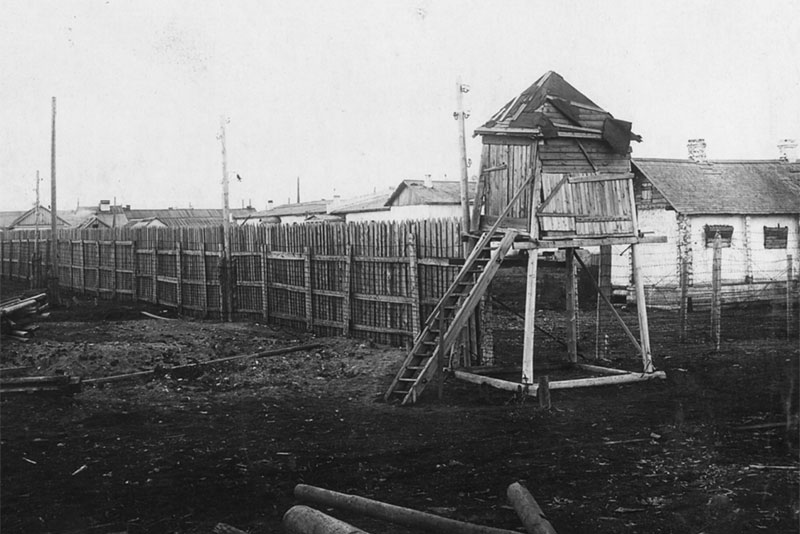 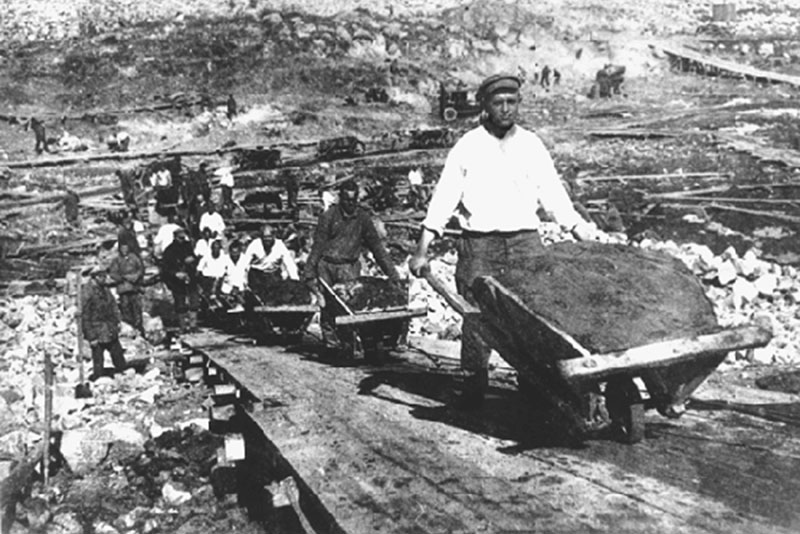 The numbers of the extermination are still very uncertain. It is estimated that 15-20 million people passed through the gulag system, but no more than 3 million were interned at the same time. The monthly death rate in some lagers exceeded 10%; in Kolyma, with temperatures of 50 – 60 ° C minus, it reached 30%. The Memorial Research Centre, which assigned to itself the goal of keeping the memory of this persecution and its modalities, carries out a precise research, collecting archival materials and survivor pieces of testimony. This research is still far from being completed. 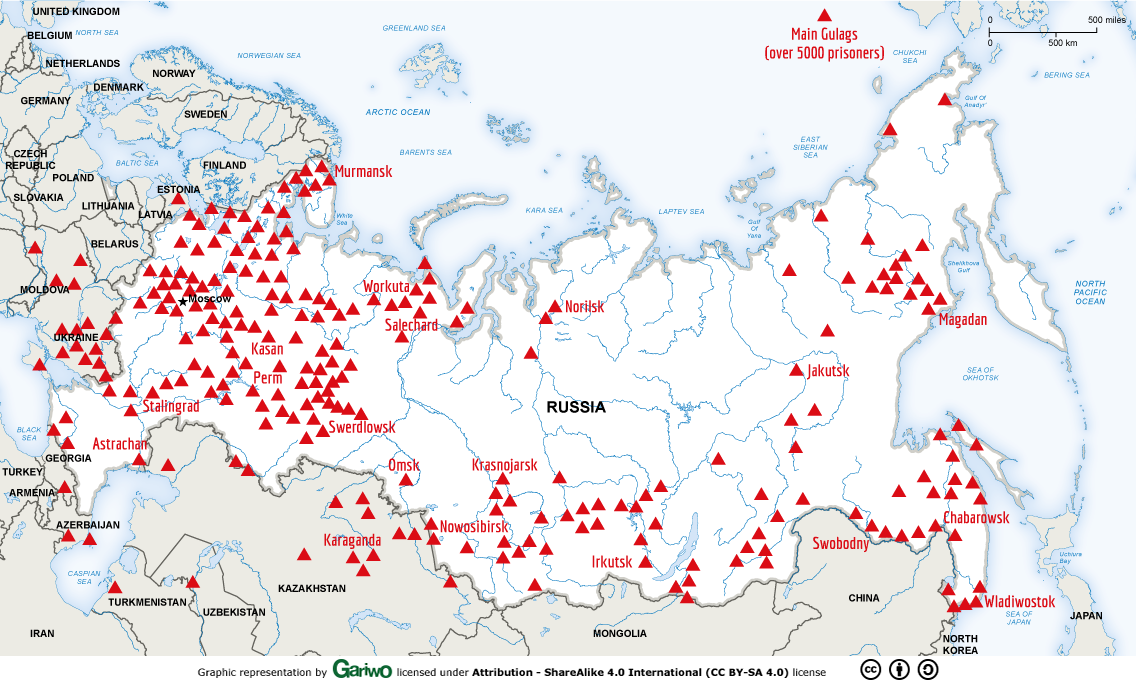