Like in the rest of Latin America, the economic-social pattern prevailing in Guatemala aster the independence from Spain in 1821, was the rule of the white, rich and privileged white minority on the majority of indigenous or mixed population forced into poverty and deprived of its rights. In 1954, a military coup put an end to an attempt of agrarian reform that ran the risk of hurting the traditional economic and power balances. That was followed by years of mass protests, in the form of both square demonstrations and guerrilla fighting. From 1960 to 1996, a civil war raged, with the interests of the urban well-off classes of the descendants from the colonizers opposed to those of the poorer classes and the campesiños of Maya descent scattered through the country’s rural areas. In the 1980s, the violence intensified, culminating in the extermination of the Mayan community by the army, led by the dictator Efrain Rios Montt.

In 1982, when former general Efrain Rios Montt became the country’s dictator, Guatemala had endured civil war for over 20 years. He simply decided to wipe out from the geographical land the indigenous communities suspected of supporting the guerrilla.
In a climate of harsh ideological dispute opened by the Cold War, the goal of erecting a stem against the worrying expansion of communism was placed above any respect of human rights. The privileged classes were frightened by the idea that the claim of social reform might end up in an attack against property rights. This was the motive behind the elaboration of the “doctrine of national security”, which provided legitimization for the generalized violence of the state against whoever claimed more social justice. Such doctrines allowed the state to label as “objectively communist” whoever stood on the opposite side and make him bound to annihilation. Any form of opposition was identified as a breeding ground of the “internal enemy”. The very commitment of many priests to the defence of the rights of the weaker people was considered as subversive. The military campaigns that led to the extermination of the Maya communities that inhabited the rural areas were undertaken according to the aforementioned “doctrine”.
There were frequent cases of militaries who chased guerrilla men in villages that had previously been identified a insurrectional turfs. Not finding any adult males, those militaries targeted their violence against the helpless village dwellers. We have pieces of testimony documenting “executions” of women, children and elderly, occurred in the course of military campaigns led indiscriminately against entire villages. 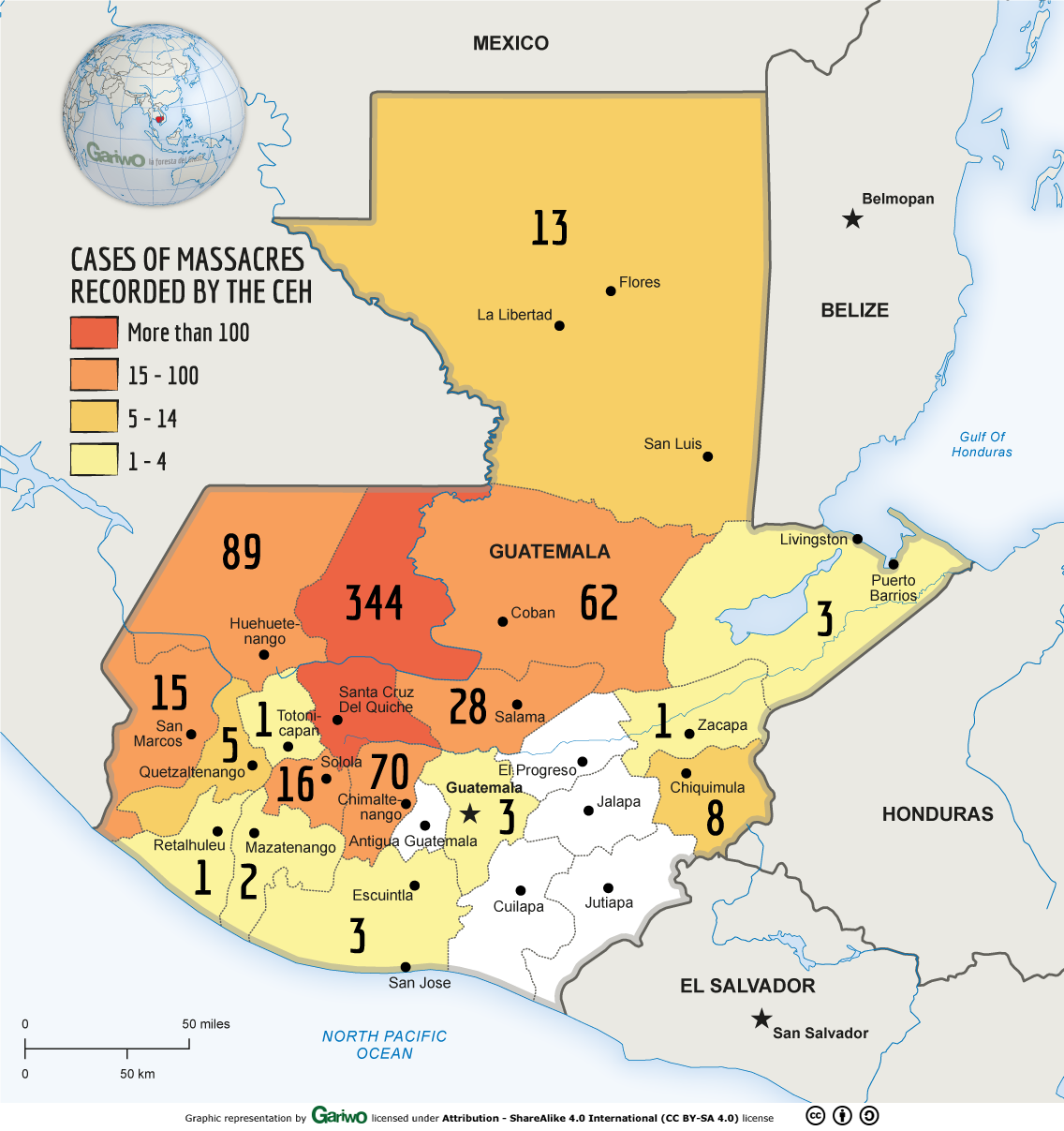 The violence culminated between 1978 and 1983. During that time lapse, the army exterminated entire Maya communities in the most remote and poorest villages of the Central-Western region. The vast majority of victims belonged to the Maya people and inhabitd the region of Ixil/Ixcàn, in the department of Quiché, where 90% of the massacres was perpetrated. The places that, among others, remain notorious are: Barillas and Nentón (in the department of Huehuetenango), Plan de Sánchez (Baja Verapaz), San Francisco Javier, Vibitz and Chicamán (department of Quiché).
The whole number of victims is nearly 200.000, out of which 132.000 died only during the operation “scorched earth”, under the governments of Lucas Garcia and Efrain Rios Montt, from the end of the Seventies until the early Eighties of the Twentieth century. To these dead we must add one million and a half people displaced by the war, 150,000 refugeees in Mexico, and 50,000 missing people.
The pattern of the murders ranges from the dismembering to the beheading an burial of the victims, still alive, into mass graves. The women, before being murdered, were almost always raped, often in front of their children. Afterwards, soldiers ravaged all the remnants. The “scorched earth operations” against the Mayas included the complete destruction of their communities, houses, resources, subsistence means, cultural symbols, social, economic and political institutions, cultural and religious values and practices. The mass murders came with the abductions and torture that led to the death of the victims. This second pattern of murder especially targeted the union leaders, students, democratic journalists and intellectuals in general.

The Commission for Historical Clarification

In 1994, under the international pressure and the patronage of the UN, the fighting sides met in Oslo to agree upon a ceasefire. On that occasion a Commission for Historical Clarification (CEH) was set up, with the mandate to reconstruct the unfolding of the events over those years and promote reconciliation on the basis of historical truth.
After an investigation that lasted 5 years, run with the cooperation of the witnesses and the financial support of the major international institutions, CEH clarified that the massacres were caused only marginally by military actions against the guerrilla men, but configured most always as crimes against the humanity, actually against the Maya population. CEH counted 626 episodes of massacres of helpless civilians by the governmental forces.
From a political point of view, CEH ascertained that the responsibility for the massacre is to be attributed first of all to the two chiefs of government who succeeded one another on power between 1978 and 1983: Romeo Lucas Garcìa and Efrain Rios Montt. The material perpetration of the massacres was carried out under the supervision of general Hector Gramajo, coordinator and supervisor of the military commanders for the operations in the Western area (Alta e Baja Verapaces, El Quiché, Huehuetenango e Chimaltenango).
The CEH’s work has been supported by another document, Never again, published on 24 April 1998 as part of the inter-diocese project for the recovery of historical memory (REMHI). 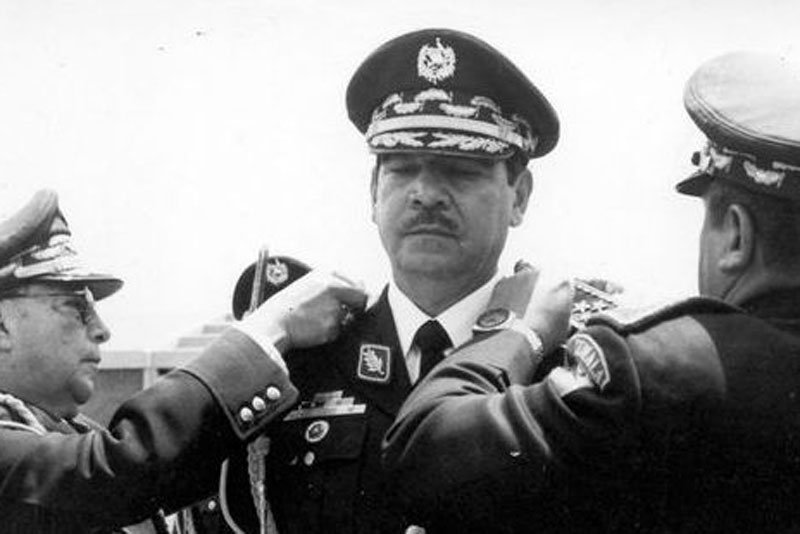 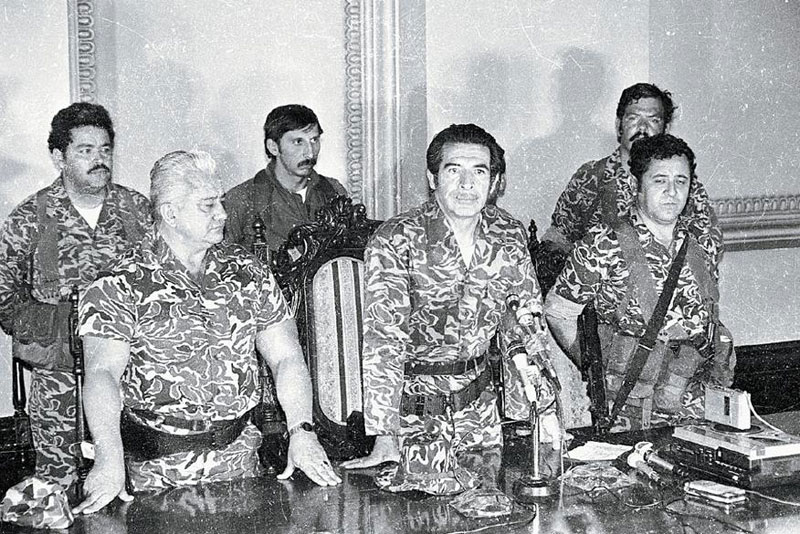 Particularly worth being mentioned is the involvement of civilians among the massacre executioners. That was planned by the highest political and military authorities. In the early Eighties, a military plan (Plan Victoria) was devised, that set up a paramilitary corps, called Civil Self-defence Patrols (PAC) with the task of supporting the army in the crackdowns. Many civilians were recruited, often by the use of force, into these PACs. Rios Montt improved and enhanced their use. The aim was that of providing rank and file to the army to do the “dirty job”, with the double result of making the crackdowns more effective and diverting any possible charges of war crimes onto people outside the army.
Albeit the PACs were responsible for countless atrocities, research by the University of Yale have proven that, out of a hundred massacres carried out in the early Eighties, 87 are to the blame of the militaries, who acted according to a well-established plan. In the document drafted by the CEH, a state strategy is exposed, to do scorched earth of all those places, first of all the Maya villages, where the guerrilla could take roots. The CEH has ascertained the existence of documents proving the thorough planning of military campaigns aimed at annihilating entire communities. We know their names: Campaña Victoria 1982, Operativo Sofía of 15 July 1982, Operación Ixil, Civilian Affairs of the Plan Firmeza 1983.
It was, according to General Hector Gramajo, member of the staff of Rios Montt, a “complete work, thoroughly planned down to the tiniest detail”. Little than one month after the coup by Rios Montt, in April 1982, the “Plan Victoria” was signed by the Junta and officially executed ten days later. The aforementioned documents are covered by state secret, and the organizations for human rights tried in vain to compel the government to disclose their content, classified at the top level of confidentiality and for this reason inaccessible for at least 30, renewable years.

The International Commission against the Impunity in Guatemala (CICIG)

On 12 December 2006, an agreement signed between the United Nations and the Guatemalan government set up the CICIG, an independent Body aimed at assisting the Guatemalan bureau of the Prosecutor, the national police and other institutions involved in the investigation of sensitive cases or working to dismantle the illegal security groups. The CICIG has the right to start investigation upon its own impulse. Th CICIG investigations have led to the issue of 18 arrest warrants, particularly against Javier Figueroa and Erwin Sperisen. 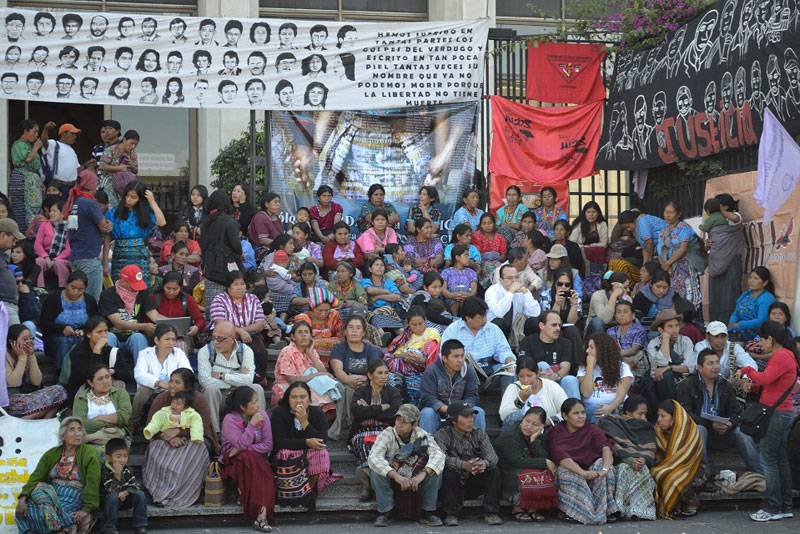 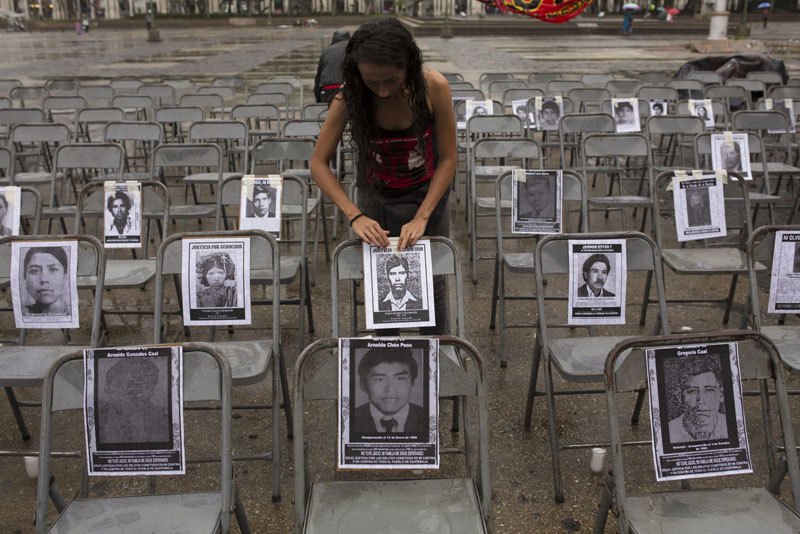 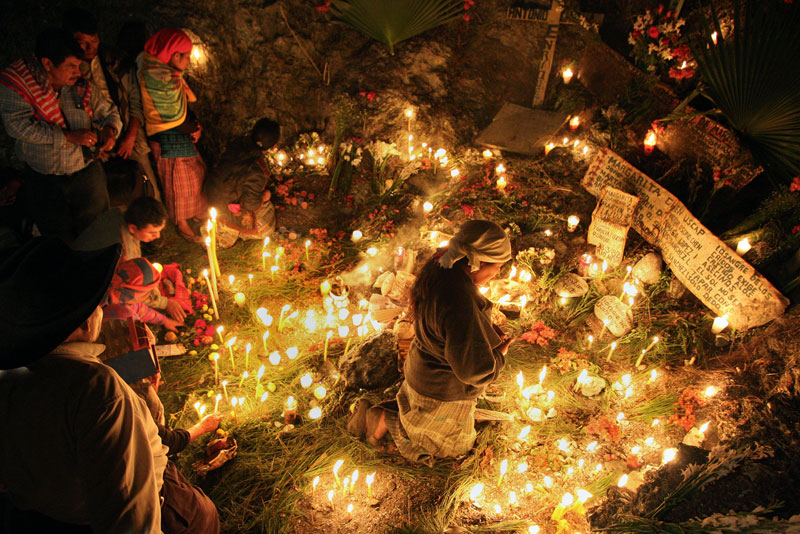 Today, in Guatemala, a shared memory on what happened, especially the crimes committed under the guidance of general Rios Montt and José Mauricio Rodríguez Sánchez, has not yet been reached.

In Guatemala there was no genocide

The indigenous communities, by bearing witness in the trials, advocate the recognition of the actual genocide committed against them, while the public powers deny there has ever been a genocide. Eloquent in this sense have been the condolences expressed to the relatives by the current President of Guatemala, Jimmy Morales, for the death of Rios Montt that happened in April 2018. Not even the tribunals are unanimous about issuing a condemnation.
In 2013, in facts, Rios Montt was sentenced to 80 years in jail. However, he never served his term because the Constitutional Court revoked the verdict that had found him guilty, among else, for the death of at least 1.771 indigenous people of Maya Ixil descent, during numerous military operations concentrated in the department of Quiché, in the North of Guatemala.
Today, for the same crimes, a new trial is going on against the former chief of the intelligence service of Rios Montt, José Mauricio Rodríguez Sánchez. While the Centro para la Acción Legal en Derechos Humanos promoted a trial against three of the constitutional judged who had “saved” Rios Montt from the condemnation, as mentioned in the recent report of the Guatemala Bureau of the UN High Commissioner for Human Rights, made public in February 2018.

In Guatemala there was no genocide