The genocide in Cambodia, carried out between April 1975 and January 1979, unfolded within the historical context of the end of the war in Vietnam and the removal of the United States both from its South Vietnamese allies and from the “friendly” government of Lon Nol in Cambodia. On April 17, 1975, the Khmer Rouges run by Pol Pot entered the capital Phnom Penh, giving rise to a communist regime and a purge that would cause over 1,500,000 deaths. The material executioners of such an extermination were a mass of young people, mostly of peasant origins, maneuvered by a very restricted élite made of Stalinist leaders. 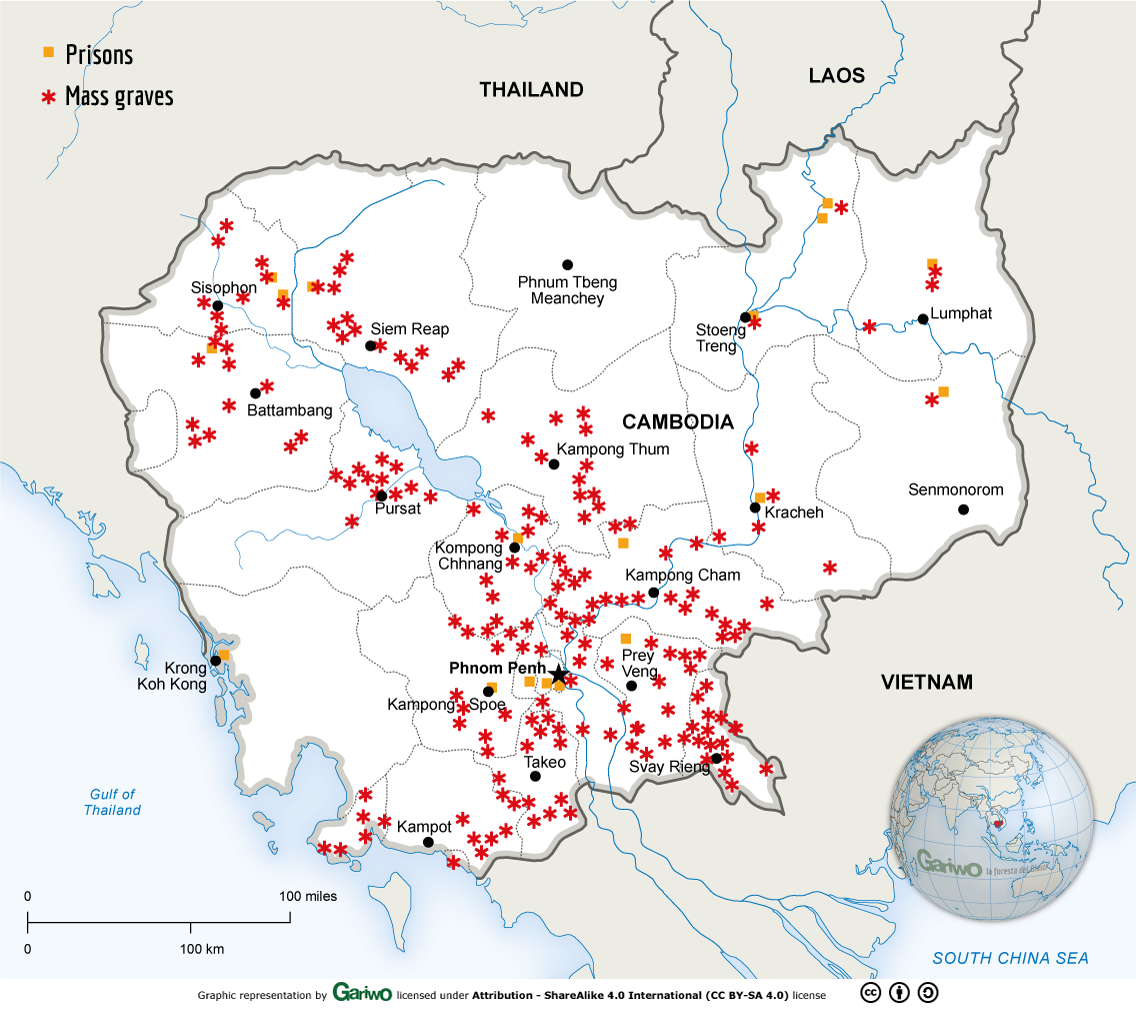 The US withdrawal from the territory paved the way to the rise of the communist forces both in Vietnam and in Cambodia, where the Khmer fighters, supported by their Viet Cong allies, overthrew in just a few days the government of Lon Nol and conquered Pnomh Penh. From here they would have liked to start accomplishing their communist ideals, to then extend them to the whole of Cambogia. These were, at least partly, favoured by a situation of strong popular discontent for the social and economic degradation caused by the old regime. In a climate of strong polarization between “capitalists, friends of the Americans” and “communists, defenders of the proletarians”, it was all too easy for the victors to label the whole society according to gross generalizations, which take personal responsibilities into no account.
On one side, there are the “people’s enemies”, first of all the politicians and officials of the previous regime, the intellectuals, professionals, teachers and all those who, in one way or another, did not do manual work. On the other side there were the peasants, who are assigned the task of “building the society of the future”. This partition between “the good” and “the bad” obeys a similar logics to that of those who label individuals based on the belonging to a race. The special feature of the genocide carried out in Cambodia, therefore, consists in the fact that it had no ethnic bases but solely cultural bases in a broad sense of the term. For example, those who wore glasses or had too clean hands were immediately killed as “people’s enemies”. The ones who managed to save themselves were those who camouflaged as peasants or anyway disfigured their bodies so to look credibly like members of the humblest strata of the population.

The survivors were compelled to forced labour in the rice or jute plantations. Life conditions were so hard that thousands died in the first days.
In the planning of the massacres, the targets were first of all the true or alleged political foes. The Khmer Rouges thus hit those who under the previous regime had held top posts, the army officials (82.6%), the policemen (66.7%), and above all the magistrates, murdered at 99%. The category of the teachers was completely wiped out. As to the minorities, 84% of the Buddhist monks, 33.7% of the Cham Muslims, 48.6% of the Catholics, 38.4% of the Chinese and 37.5% of the Vietnamese were killed. 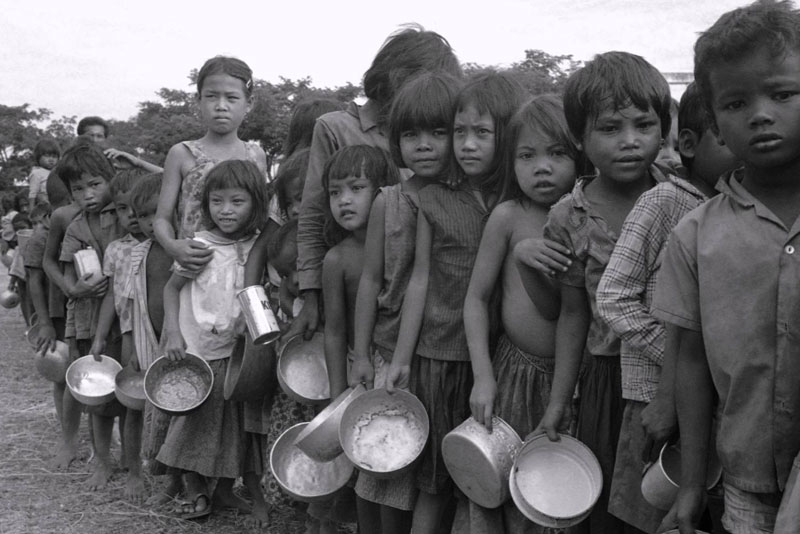 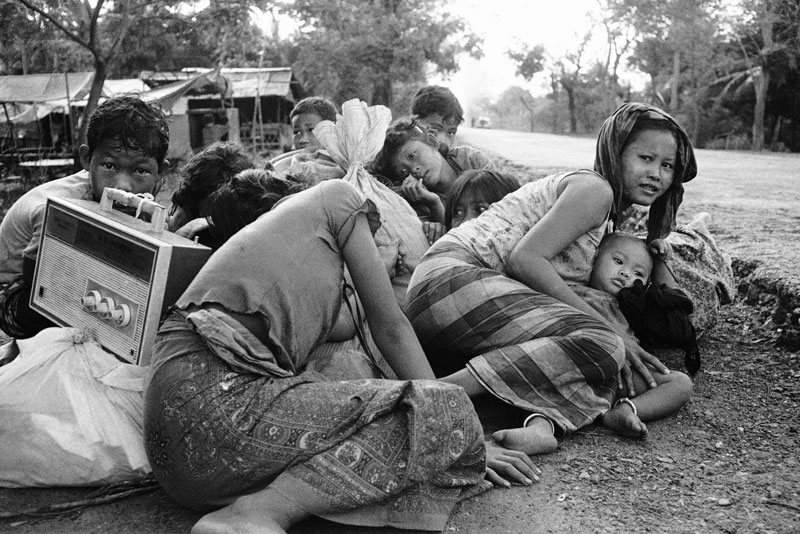 The responsibility for the genocidal plan and its execution have to be assigned to the leading group of the Khmer Rouge movement, formed by the so-called “Big Brothers”, an élite consisting in 20-25 individuals who acted in agreement with each other, based on a shared political training, which can be summarized into four main stages: the stay in France in the Fifties, where their ideological training started; the time of the opposition against prince Sihanouk; the years spent in hiding in the Cambodian jungle, where they took refuge when they were indicted of high treason by the government of Lon Nol because of their communist ideas; the experience of the most significant moments of the Chinese cultural revolution.

The main exponents of the “Big Brothers” were Pol Pot (Brother No. 1), Ieng Sary, Son Sen, Hou Youn, Hu Nim, Khieu Samphan and Duch, director of the sadly known S-21 camp, the main jail institution of democratic Kampuchea. The material executioners were recruited among the lower and middle cadres of the Communist party, of a low cultural level, together with 60,000 very young peasant-soldiers precisely selected because they were not “contaminated” by urban capitalism, nor by the imperialist school system.
The planning of the extermination was thus predisposed during the time of hiding in the jungle, where the “Big Brothers” drafted a version of communism based on a vision of harsh hostility towards the urban lifestyle, to which they opposed an unrealistic economic project based on agriculture and focused on rice cultivation.
Given their physical and ideological isolation, we cannot talk about a detailed, consistent and linear plan, but the basic guidelines of the planning are clear, despite the indefiniteness of a concept, the one of “objective enemy”, which from time to time shifted the focus from a target to another, according to the given political analyses.
The elimination of the elements linked to the old regime, now contaminated by capitalism, was justified as need to “purify” the Cambodian society from the “bourgeois tumor” that had spread inside it over the previous years. The deportation of hundreds of thousands people from the cities to the countryside answered the logics of “re-education” of the inmates and their restitution to a “productive” role within a new society. Albeit not planned, the death of the inmates was easily foreseeable, as they were forcibly moved to the places assigned to them and held in conditions of malnutrition, when not enslaved, tormented and tortured. 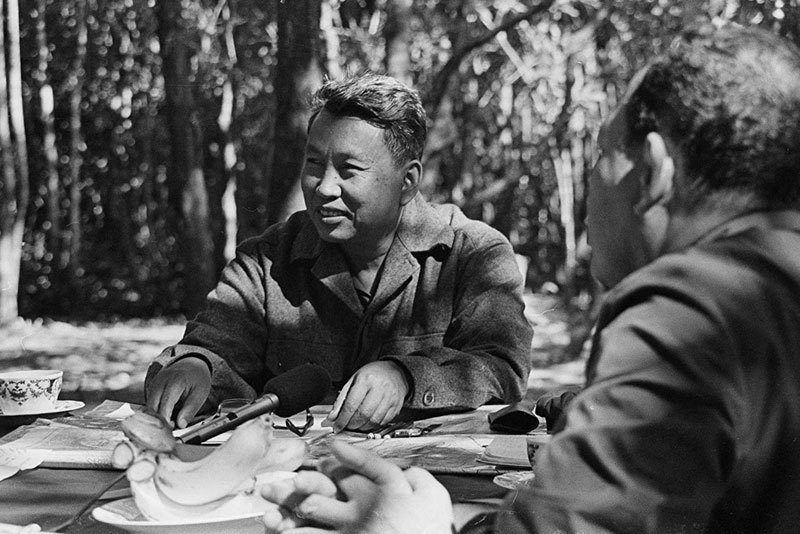 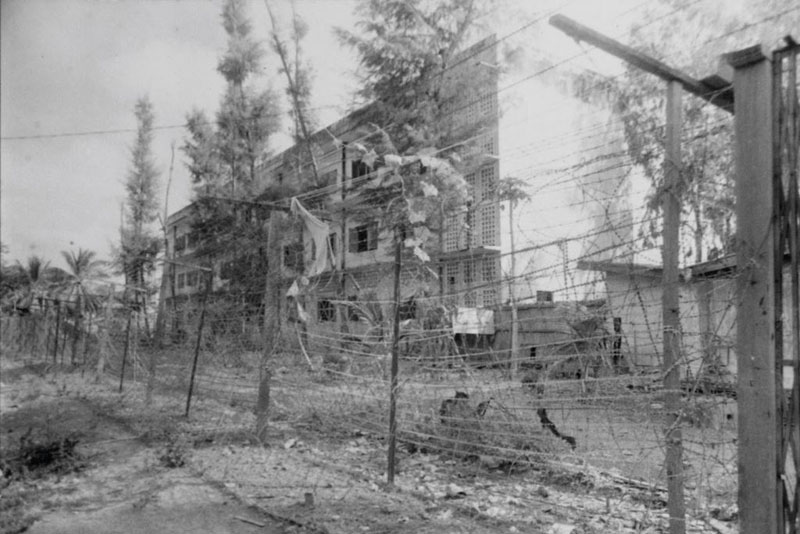 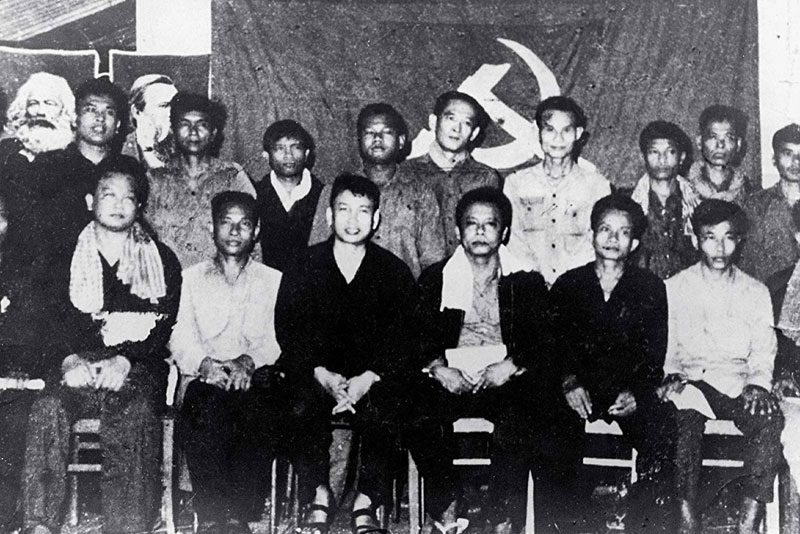 The victims amount to an estimated number of 1,500,000-1,800,000. Considering that at the time, Cambodia had nearly 7,500,000 inhabitants, the death toll of this genocide oscillates between 20% and 29% of the population.
The Khmer Rouges, pushed by the need to find more and more “objective enemies”, exterminated the population following the criterion of the dichotomy between city and countryside, and, secondly, the time criterion distinguishing between “new” and “old” citizens. As a result, the two criteria caused a death rate of nearly 40% among the inhabitants of the urban areas, while in the rural ones the average was about 10%. Many deaths were caused by the evacuation of the town of Pnomh Penh, conquered by the Khmer Rouges on April 17 1975, whose inhabitants were forced to leave their homes by a few hours.
As a whole, the Khmer Rouge regime was guilty for the murder of nearly one quarter of the Cambodian population in those years, because of malnutrition, lack of medical facilities, excess of workloads and mass capital verdicts.
A contribution to an increase in the death toll of the mass murder was given by the prison of Tuol Sleng and the camp of Choeung Ek. In this latter place of detention and torture, after the fall of the regime, people discovered 86 mass graves containing 8,985 corpses. It is presumed that there might be up to 10,000. Among the dead, there are also 17,000 former prisoners of the Tuol Sleng jail. From there, they were transported on tracks to Choeung Ek, forced to dig their own grave by themselves and then killed by stick blows or knife wounds (babies were often killed by hurling them against the trees or running them through with bayonets in front of their mothers) by Khmer Rouge guards who, in many cases, were not older than 13.

The special Tribunal to try the Khmer Rouges

The maximum culprits of the genocide, after many years, were tried by an international tribunal, but only 3 have been sentenced until now.

The special Tribunal to try the Khmer Rouges is a court formed by both Cambodian and foreign judges, established in 2006 based on an accord between Cambodia and the United Nations. The three convictions reached after 10 years of proceedings are the only ones, by now. Current prime minister Hun Sen though opposed further trials by the special Tribunal, suggesting they might cause a civil war, given the country’s complicated history. Besides trying to limit the number of defendants, Cambodia also barred access to potential witnesses who currently hold top government posts. 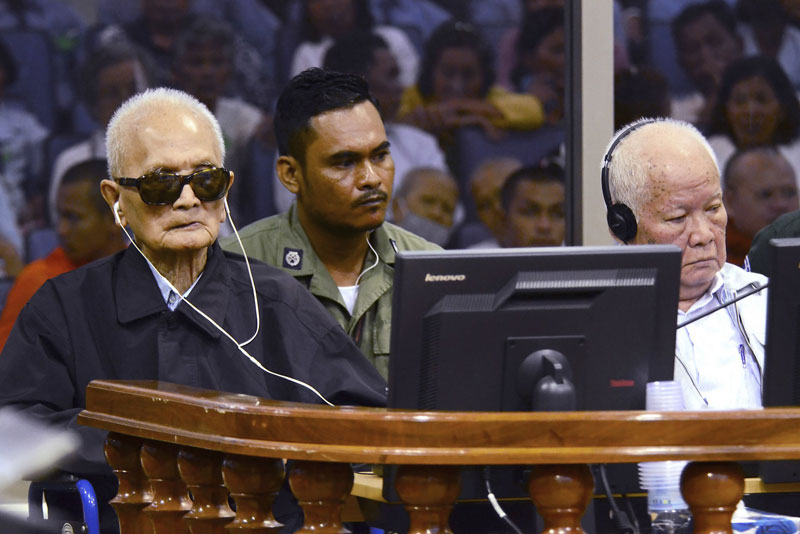 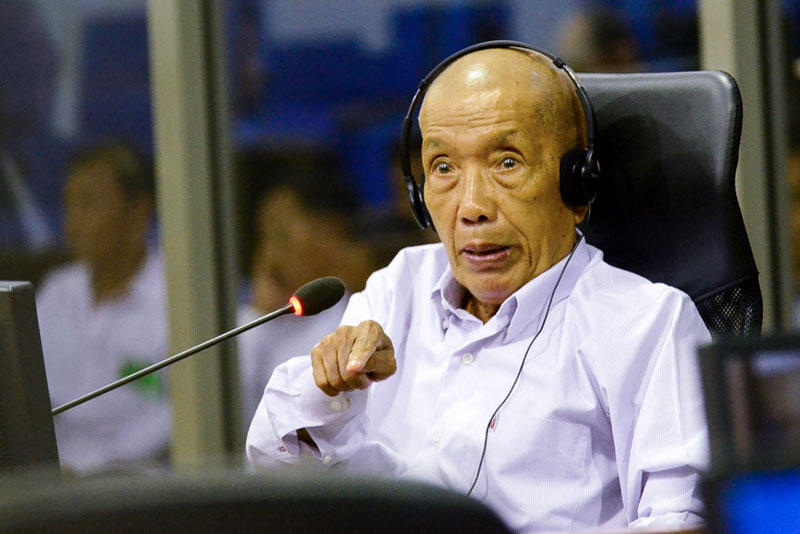 Duch during the trial

The current government (2017) also comprises some former members of the Khmer Rouges, including the very Hun Sen, who joined them when he was little older than 20.
In 1991, after the withdrawal of the Vietnamese troops and the Paris accords, Cambodia entered a difficult transition toward democracy. A Supreme National Council (SNC), formed by the representatives of the four main Cambodian political forces including the Cambodian People’s Party, PPC, run by current prime minister Hun Sen, was formed.
Today, Cambodia is a land of victims, executioners and their children. Victims and executioners live together within a “culture of impunity”. De facto, in the Cambodian society the tragedy that occurred has been repressed, a repression that concerns both the victims and the executioners.
Such repression finds its expression also in the absence of the topic of genocide from the school books. Only in 2009, a short history of the time of the Khmer Rouges was added for the first time in the curriculum for the high school, after 30 years of silence.