The genocide of the Armenian people occurred during World War I, in the territories of the Ottoman Empire. The ultra-nationalist government of the Young Turks, an emanation of the “Union and Progress” party, chose to cleanse the Anatolian area of non-Turkish elements and decided to deport and exterminate the Armenian ethnicity that had inhabited the territory since the 7th century B.C., that was well integrated but not assimilable. The Armenian Genocide is considered today as the prototype of the subsequent genocide cases. 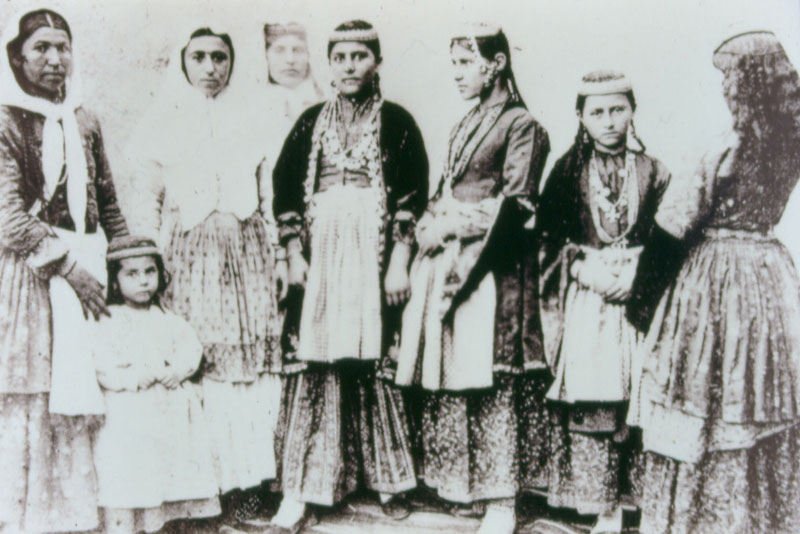 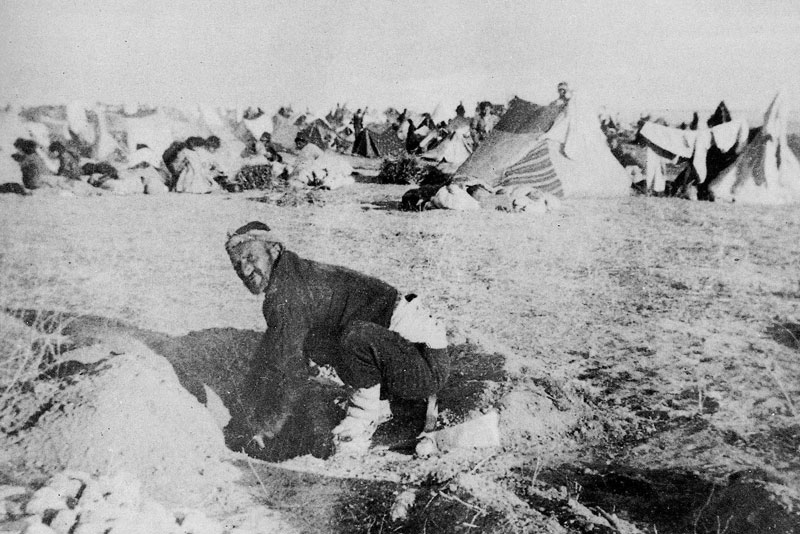 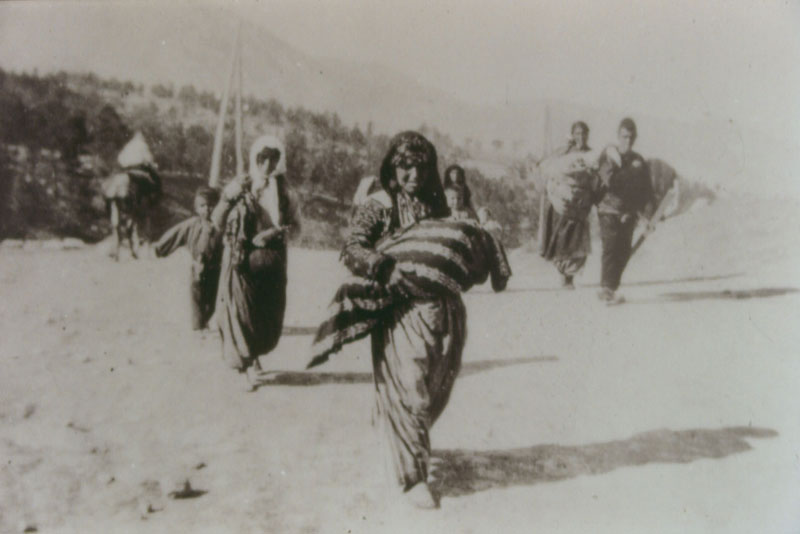 The roots of genocid

he warning signs have to be retraced in the international political frame work of the 19th century and in the decline of the Ottoman Empire, the great sick man of Europe, that entered a crisis while clashing with the peoples’ aspirations to reforms, political participation and self-determination.
The Great War would then determine the end of the three great Empires, the Austro-Hungarian, the Czarist and the Ottoman one. The genocide of 1915 was preceded by the pogroms of 1894-96, based on the will of Sultan Abdul Hamid II, and other massacres, in particular the one of 1919 in Cilicia, in the wake of the revolution of the Young Turks – who had seized the power in 1908, paradoxically in the name of the freedom and equality of all the peoples of the Empire.
Very soon, we witness the prevailing of the extremist wing of the Union and Progress Party and, in 1913, a military junta formed by the triumvirs Djemal, Enver, Talaat was formed. They were the regime’s strongmen, responsible for the execution of the genocidal project. 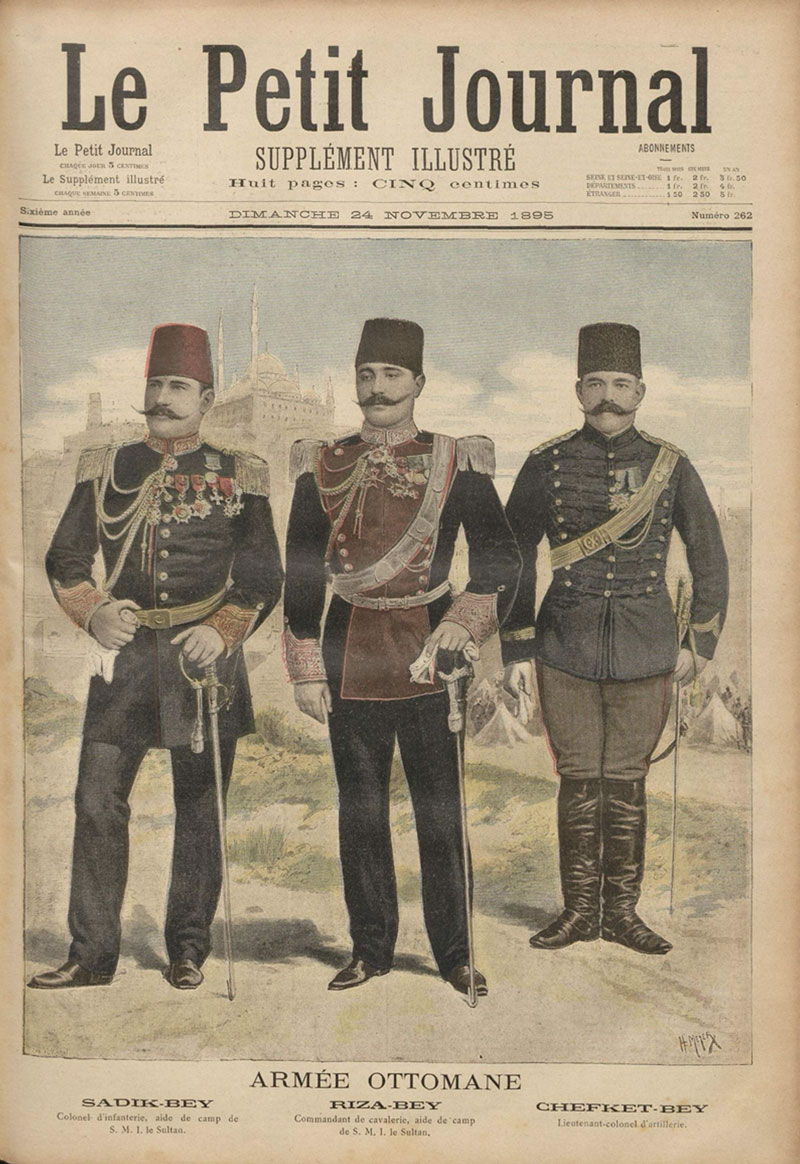 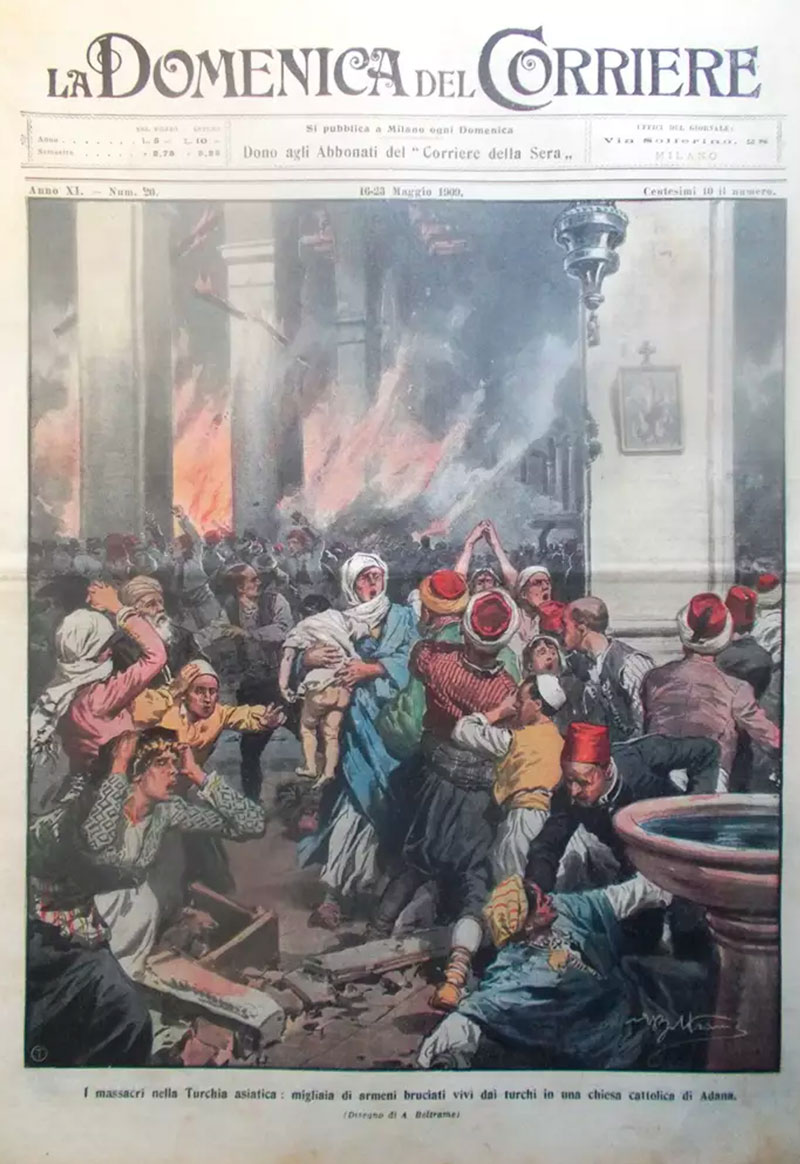 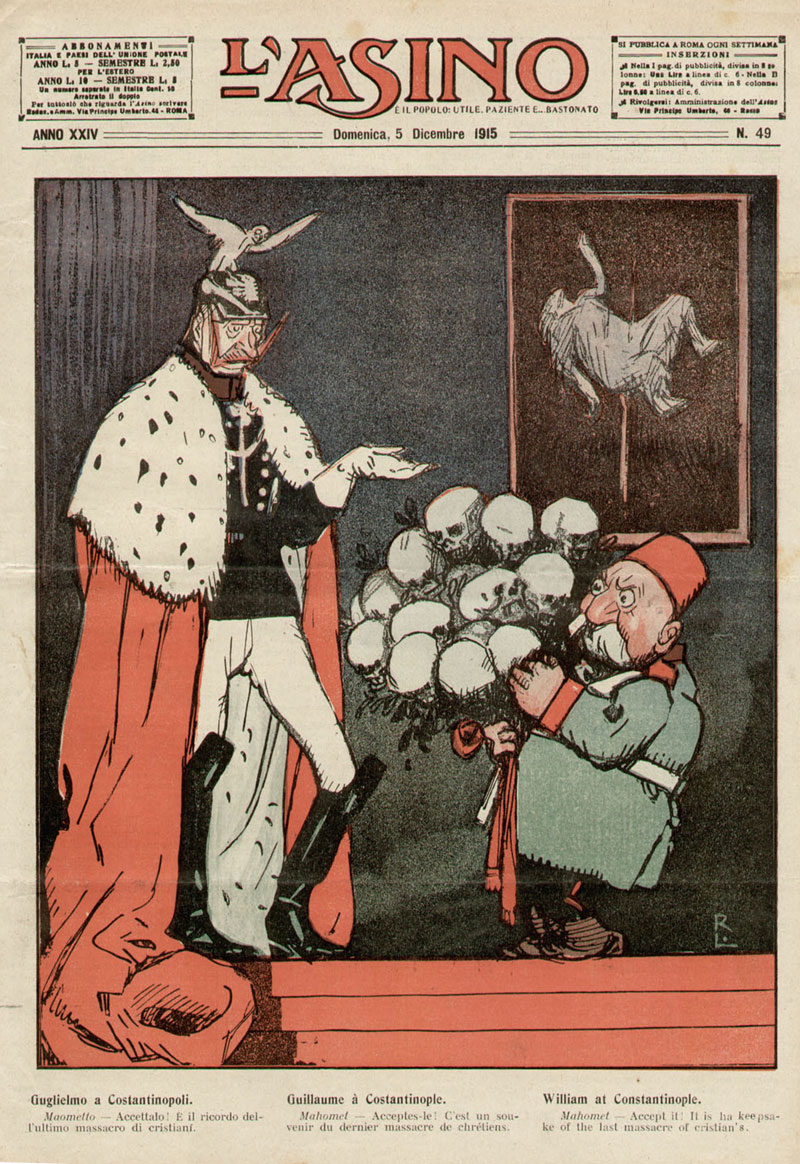 The key motive that inspired the Young Turks government and the triumvirate to act was the pan Turkish ideology, the dream of an immense territory from the Mediterranean to the Turan plateau, and the resolve to reform the state on a mono-ethnic base, that be culturally and linguistically homogeneous. Armenians, Greeks, Assyrians, Jews: the Ottoman Empire was actually a mosaic of different ethnicities and religions. The Armenian population, that was the most numerous one, of Christian faith, and had absorbed the ideals of the Western rule of law, with its requests for equality constituted an obstacle to the project of homogenization of the regime.

The Ottomans’ goal was to erase the Armenian community as a historical, cultural and above all as a political subject. Not secondary to that was the looting of the Armenians’ goods and lands, which provided the economic base of the future Kemalist republic. 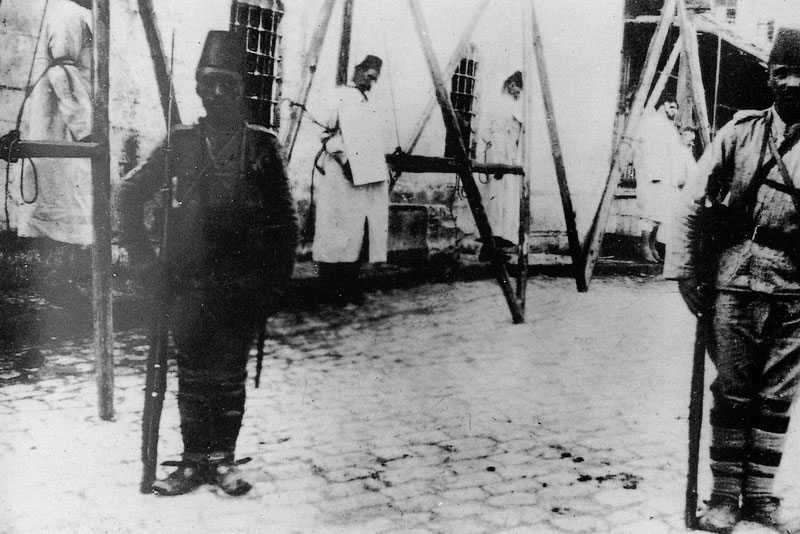 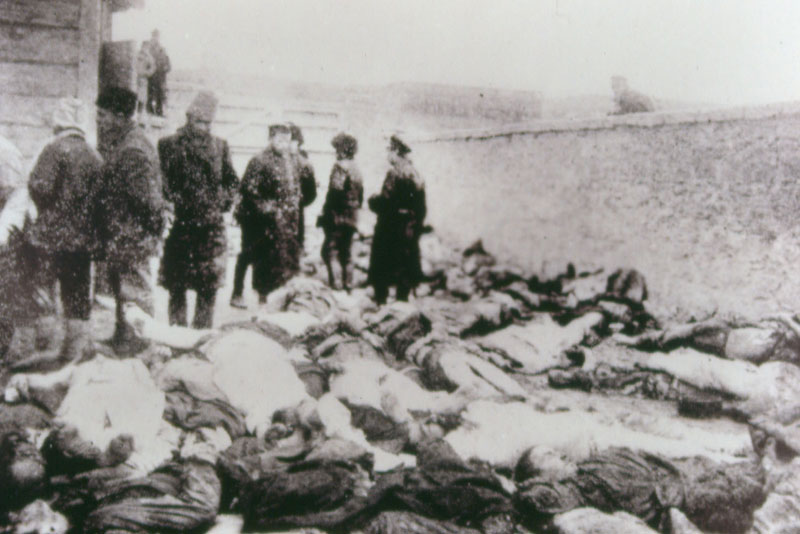 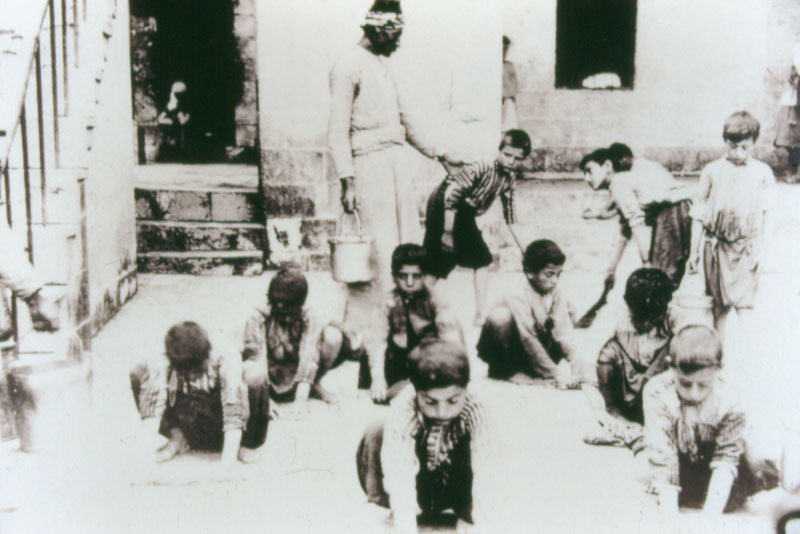 The planning occurred between December 1914 and February 1915, with the aid of German advisers, given the alliance between Germany and Turkey.
The most intransigent wing of the Union and Progress Party’s Central Committee (CUP) planned the genocide, which was carried out by the means of a paramilitary criminal complex, the Special Organization (O.S), run by two doctors, Nazim and Chakir. The Special Organization depended on the Ministry of War and carried out the genocide under the supervision of the Interiors Ministry and the collaboration of the Ministry of Justice. World War I (1914-1918) offered the government of the Young Turks the occasion to solve once and for all the “Armenian question”, that had already broken out at the time of the Berlin Treaty of 1878 at the end of the Russian-Turkish war.

April 24th, the Day of recollection and duty

In the night of 24 April 1915, the Armenian élite of Constantinople was arrested, deported and eliminated. Then, the army disarmed and massacred the Armenian militaries, and compelled them into forced labour on the railway Berlin-Baghdad. In Spring, the government started the systematic deportation of the Armenian population to the desert of Der es Zor.

First the dogs, then the Armenians

Only a few arrived there alive. The majority was exterminated in the course of true death marches. The near totality of the Armenians perished in the land they had inhabited for over 2,000 years. Their goods were seized.

The Armenian genocide over 3 generations

The politicians responsible for the execution of the genocide were: Talaat, Enver, Djemal, the triumvirs of the single party that was on power. They issued the decrees of abolition of the reforms, deportation and seizure of the goods of the Armenians – decrees, which were never ratified by the Parliament – determining the destruction of the Armenian people.

April 24th, the Day of recollection and duty First the dogs, then the Armenians The Armenian genocide over 3 generations 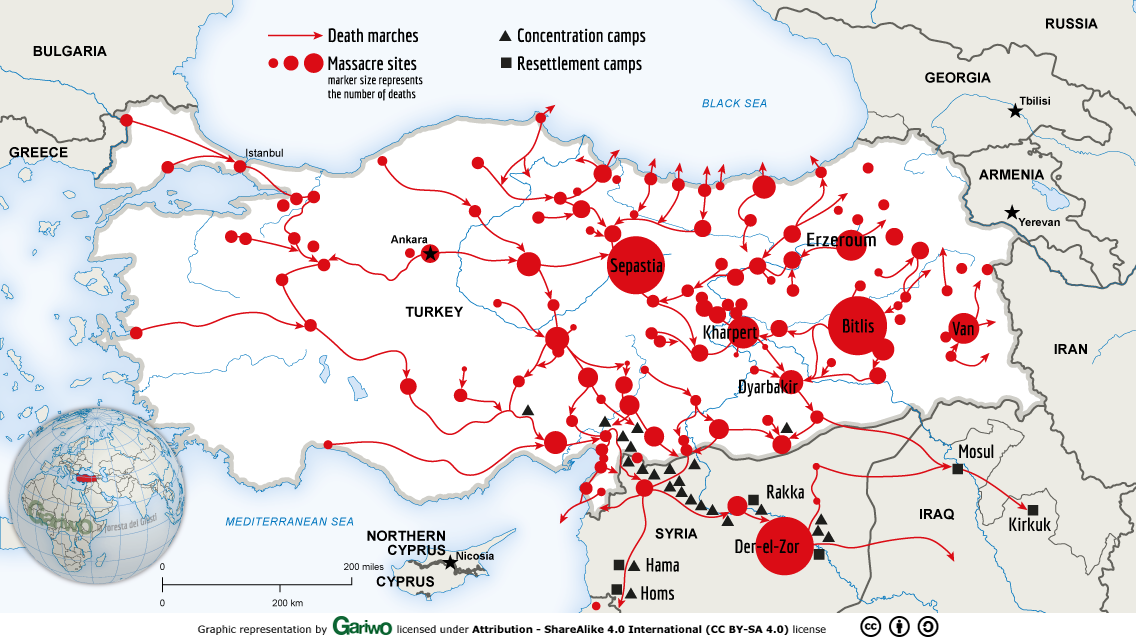 A million and a half people lost their lives: two thirds of the Armenians of the Ottoman Empire. Many were the Islamized children and the Armenian women who were sent to the harems.
strong>Mustafa Kemal, called Ataturk, in the Turkey defeated in the wake of the Lausanne Treaty (1923), founded the Turkish Republic, keeping the territory that had been divided by the Sèvres Treaty (1920) into influence areas among the great powers, and assigned for the Western part to the Greeks and Italy, for the Eastern part to the Armenian, Kurds, France (Syria) and England (Palestine, Jordan and Iraq). Mustafa Kemal had completed and backed the work of the Young Turks, both with new massacres and expulsions, and with the denial of responsibility of the crimes perpetrated, and by definitively seizing the Armenian’s goods without any compensation.

The official Turkish historiography denies the existence of an intentional and specific plan of extermination and considers the massacres as a painful consequence of the war that hit both the Armenian population and the Turkish one. Talking about genocide in Turkey could land you in jail, and also the recognition of the Armenian genocide by a third country sparks Ankara’s protests.

Actually, the Great War was a useful circumstances to solve the Armenian problem once and for all and also to mask the intentionality of the extermination plan.
The holy mountain, Ararat, which today belongs to Turkey but which the Armenians of the small Independent Republic established in 1992 in the wake of the dissolution of the Soviet Empire, can contemplate beyond the Turkish frontier, feed a feeling of loss on a daily basis. On the Hill of the Swallows (Dzidzernagapert), in the capital, Yerevan, the Memorial of the Metz Yeghern, the Great Evil, enshrines and expresses the enormity that was perpetrated in the course of this major tragedy. 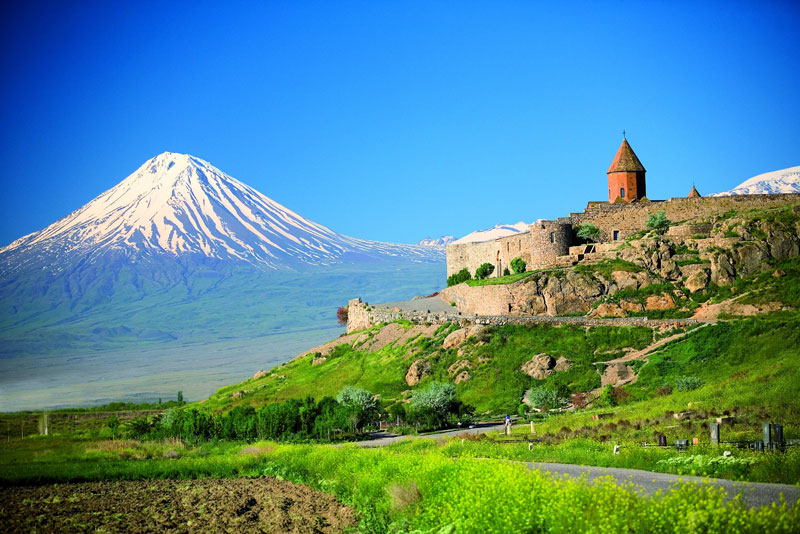 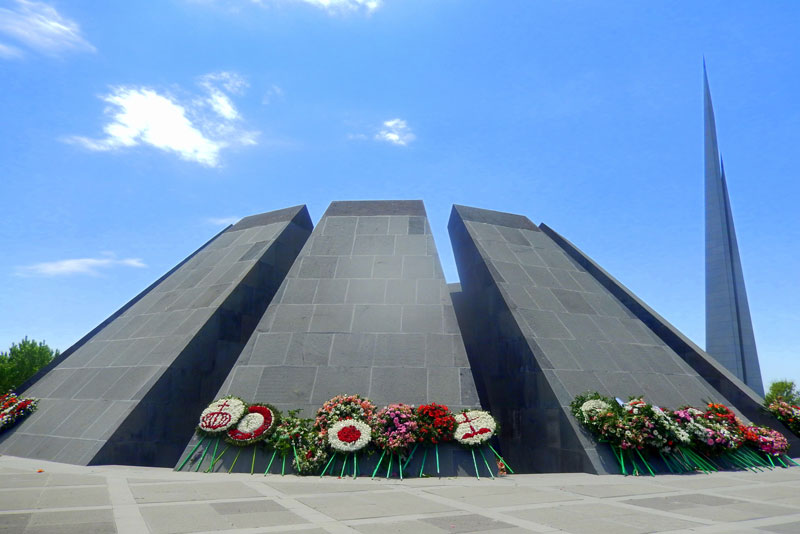 The Memorial of the Metz Yeghern