Apartheid (literally “separation”) is the term used to define the policy of racial segregation established by the white government of South Africa in the wake of World War II, which remained in force until 1993. It has been declared an international crime by the International Convention on the Elimination and Punishment of the Crime of Apartheid adopted by the United Nations General Assembly with resolution 3068 (XXVIII) of 30 November 1973. 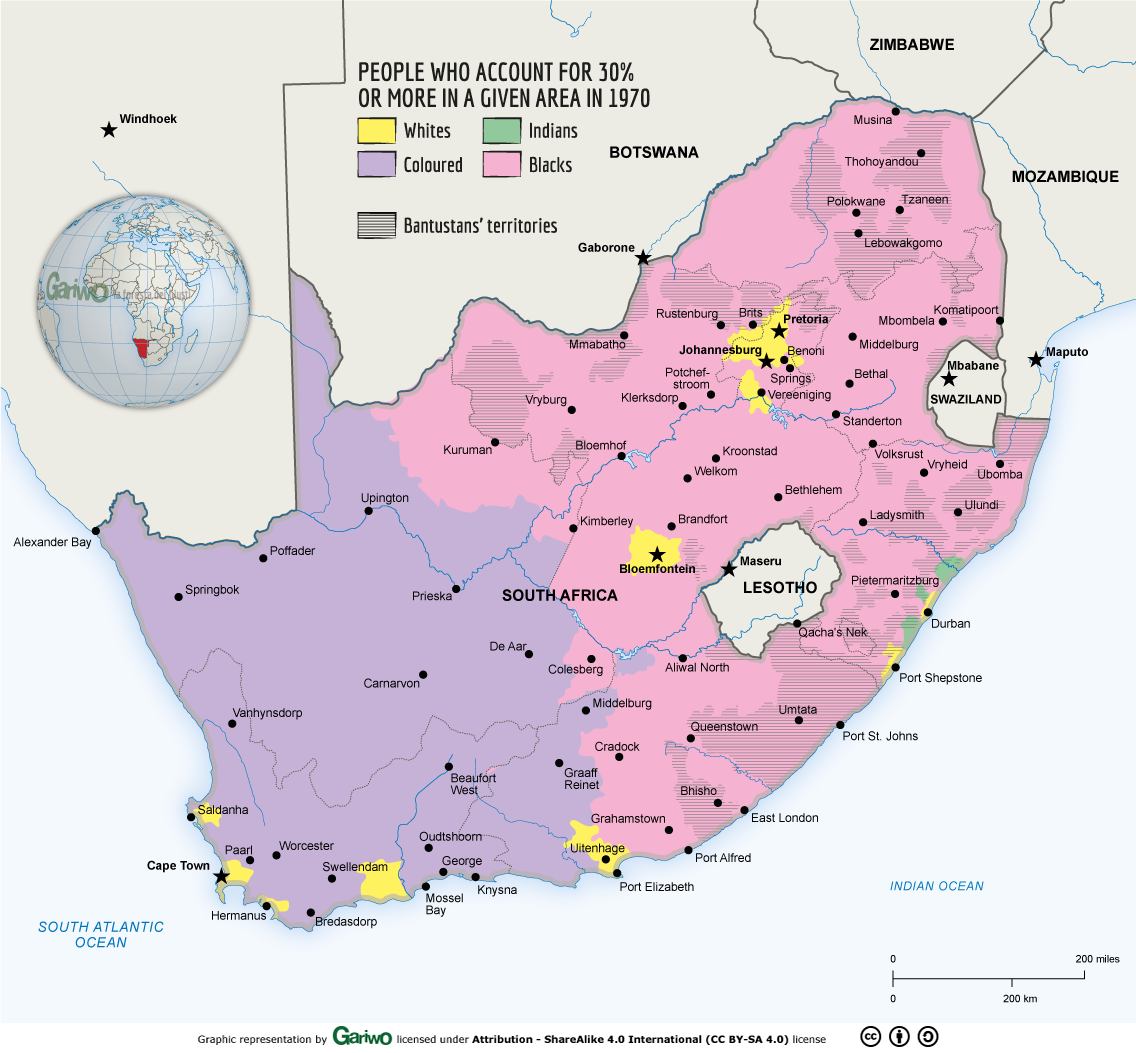 A regime that discriminated 90% of the population

The term “apartheid” was used for the first time in the political meaning by Jan Smuts, Afrikaner army officer during the second Boer war (1899-1902) and then South African politician, Prime Minister of South Africa from 1919 to 1924 and from 1939 to 1948. In 1917, out of his strong belief in the racial superiority of the settlers from Holland and their descendants, he coined the word “apartheid” – which became a government system only after the victory of the National Party in 1948.

In South Africa, ever since the first colonial settlements, white people have amounted to no more than 9% of the population. Called “Afrikaner”, they were descendants of Dutchmen or Britons, these latter being more favourable to a conciliation with the black co-citizens. The main ideologists of apartheid, who had been influenced by Nazism, were Daniel François Malan, Johannes Gerhardus Strikdom and Hendrik Frensch Verwoerd. Formally, they said they wanted to “let grow in harmony” the various ethnic groups with their own traditions; actually, they completed the true legal and policing “architecture” of apartheid.

The birth of the anti-apartheid movement

The struggle against this regime was led by the African National Congress (ANC), a party created in 1912 to defend the rights of the black majority. Since 1947, this party started cooperating with the Natal Indian Congress, the Indian party founded by Gandhi in the Natal region, and this enabled it to oppose directly the country’s racist government. From 1952 to 1957, the ANC was presided by Albert John Lutuli (1898-1967), preacher of the United Congregational Church, Peace Nobel Laureate in 1960, great personality behind the non-violent struggle against the apartheid regime.
Since the Sixties, the ANC fight mainly focused on the special passports for the back, with numerous sabotaging operations. After Lutuli’s death in an accident, his successor was Oliver Tambo (1917-1993), friend and aide of Nelson Mandela, with whom he had attended the university of Fort Hare in 1939. In 1944, together with Mandela and Walter Sisulu, he was one of the founders of the ANC Youth League, in 1952 he founded with Mandela the Tambo and Mandela law firm, in Johannesburg, offering legal assistance to a lot of Africans.
In 1956, Mandela was arrested on charges of high treason along with other 150 people. At the end of the trial, which lasted for nearly 5 years, all defendants were acquitted. The atmosphere, however, had become very tense. On 21 March 1960, in fact, in the black township of Sharpeville, some Afrikaners policemen had blasted away a group of unarmed African protesters, killing 69 and injuring 180. The demonstrators protested against the restrictions imposed by the South African regime on the non-white population’s right to circulate. The massacre of Sharpeville raise a wave of protests in Cape Town, and before the order was restored, there were over 10,000 arrests. Mandela refused the nonviolent fight method and opted for the armed wing Umkonto we Sizwe (“sword of the nation”), which started to use force.

In 1962, Mandela was arrested again on charges of high treason together with other ANC members and in 1964 he received a life sentence. He thus spent the following 27 years in jail, where he completed his law degree and he overcame the strategy of armed struggle to come to devise a country where neither the whites nor the back would rule, but the government would be multiracial and constitutional.
In the meanwhile, the South African authorities resorted to sharper and sharper punishments against the demonstrators. In 1975, Afrikaners was set as compulsory language in all schools, the blacks were deprived of all civil and political rights and millions of them, called “Bantus”, were evicted from their homes and deported into the “homelands of the South”. Shops had to serve the white customers first, and the blacks, in order to circulate in the white areas, needed special passports. 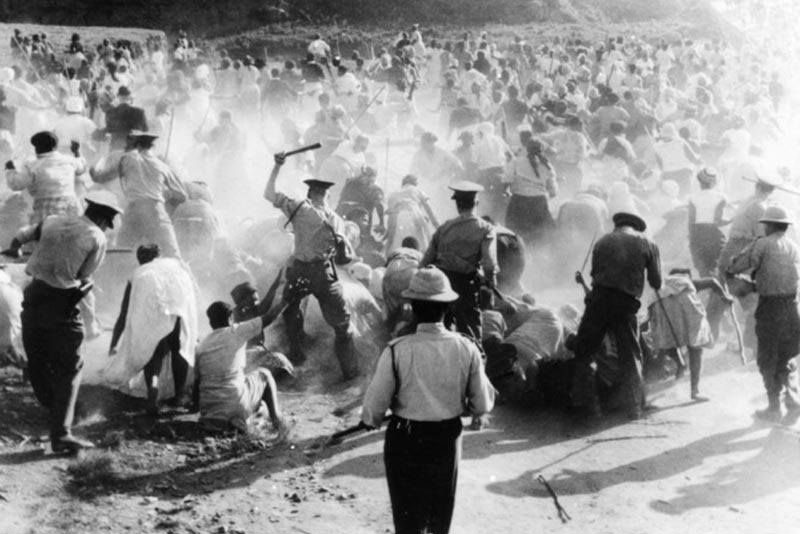 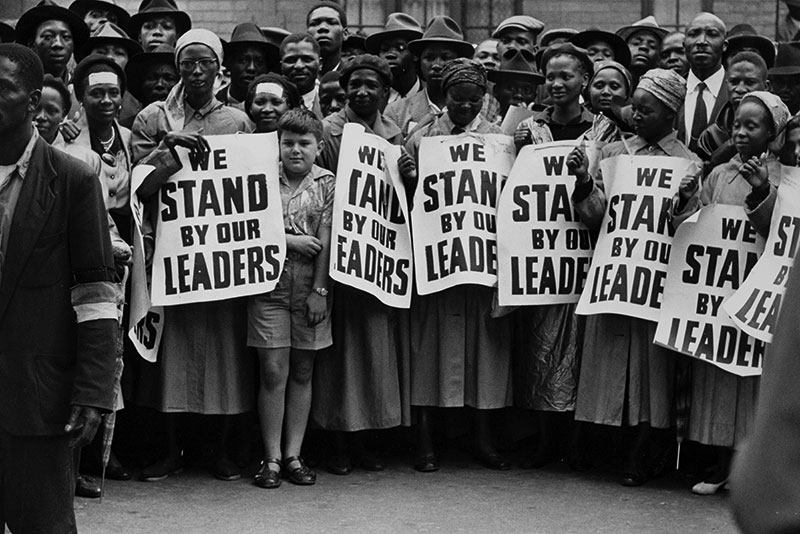 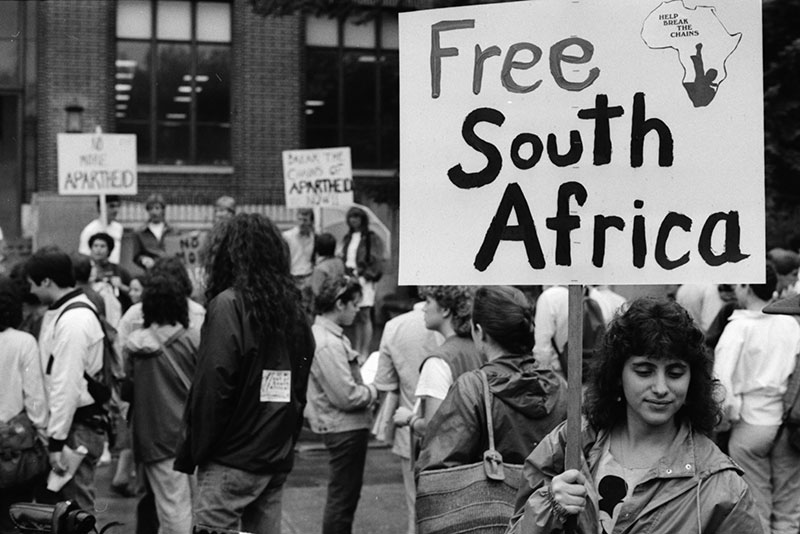 This policy resulted into the international isolation of South Africa, expelled by the Commonwealth already in 1961. In 1979, the United Nations General Assembly invited its member countries, multinational companies, banks and other institutions to interrupt their relations with the apartheid regime, and within the UN sphere, a Special Committee against the Apartheid was set up. In 1985 and 1986, the European Community launched the embargo on the weapon trade, the end of the oil exports and the cultural and sport exchanges, and, later on, an embargo on new investments. Since the Tokyo Olympics of 1964, South Africa was also excluded from the Games.

The liberation of Mandela and the end of the apartheid

The situation was tackled by the President Frederik Willem De Klerk, Afrikaner leader of the National Party, who on 2 February 1990 rehabilitated all the opposition political groups, including the ANC. Nelson Mandela was freed on 11 February 1990.
In 1991, the path of dialogue started, and in the course of the year a series of laws symbols of the apartheid was abrogated. The elections of 27 April 1994 saw the landslide victory of ANC with 62,65% of the votes, yet below the threshold of 2/3 necessary to amend the Constitution. Ever since, the ANC has uninterruptedly governed the country, first with Nelson Mandela – who in 1993 was awarded the Peace Nobel Prize -, then with the Presidents Thabo Mbeki, Kgalema Motlanthe and Jacob Zuma. 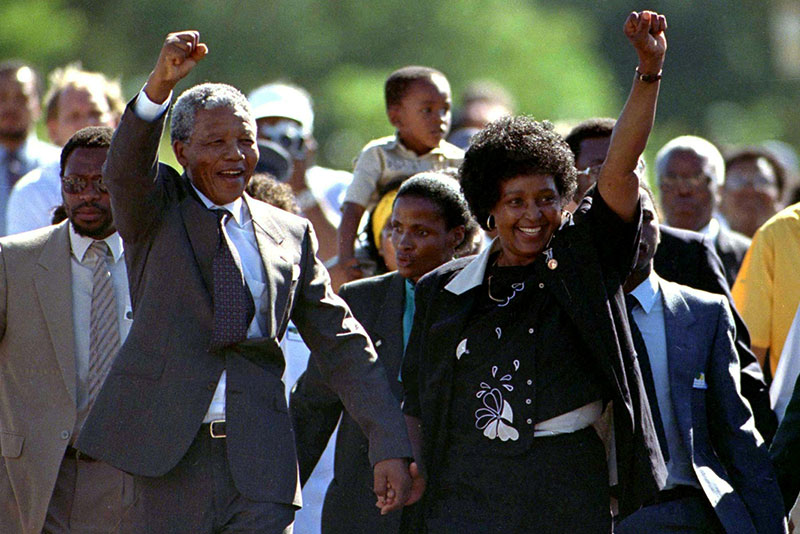 The Truth and Reconciliation Commission

Once become the President of South Africa, Mandela had to face the difficult passage from the apartheid regime to democracy. It is in this frame work that the Truth and Reconciliation Commission was introduced by the new democratic Parliament in 1995 – chaired by Desmond Tutu, the Anglican Archbishop of Cape Town- with the task of heeding the testimony of both sides, the victims and the executioners.

The TRC was based on the belief that learning the truth about what happened during the time of the apartheid would later favour the possibilities of reconciliation between the different ethnic, racial and cultural groups of the country.
The Commission articulated its work into three committees. The Committee about human rights violations searched for the victims, the documentation on the crimes committed against them from 1960 to 1994, and organized meetings, during which the victims told about the abuses they had endured. Those meetings were filmed by the media and broadcast live by the radio, in all the country’s official languages.
The Amnesty Committee run the trials, in order to hand over the villains to justice. This entity also had the specific task of examining the demands for amnesty – which was conceded only if all the requirements set by the Commission, starting from a full and total confession - were met, regarding all the gross human rights violations indicated by the law that established the Commission, i.e. murder, attempted murder, torture, abduction and gross mishandlings.
The third subcommittee, assigned to securing reparation and rehabilitation, examined the cases evaluated by the two other entities and decided the most suitable compensation and rehabilitation measures. Reparations could consist in medical treatment, economic compensation, but also helping victims resume the studies interrupted because of the conflict, dedicating a street to a deceased relative or giving a proper burial of the missing or dead dear ones.
The results of the Commission’s proceedings were published in 1998. The inquiries brought into light the crimes perpetrated by the apartheid government, the police and the army, but also by the ANC and other opposition organizations. The amnesty was conceded to 849 people and denied to 5932, out of a total of 7112 requests. The TRC has managed to create a kind of a virtuous circle in which fear and atonement, remorse and repentance, threat and reward have intertwined with and strengthened each other. 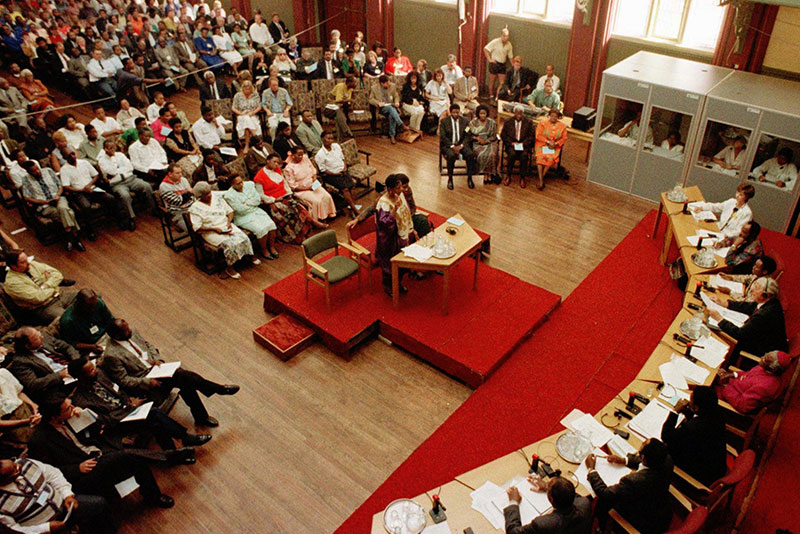 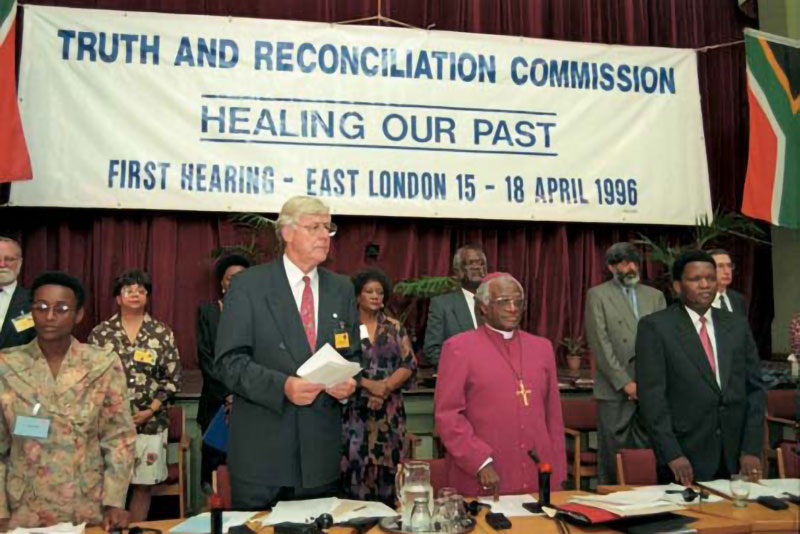 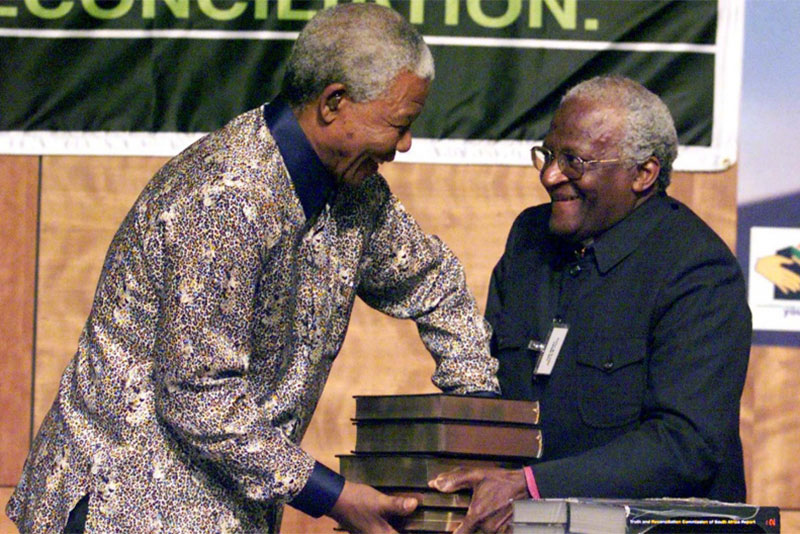