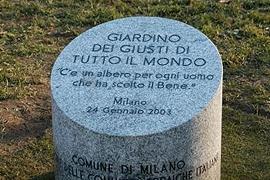 The Memorial Stone in the Garden of Milan

In honor of Remembrance Day 2010

International meeting on the exemplary figures of Marek Edelman, Vasilij Grossman and Guelfo Zamboni.
These figures will have a tree in the virtual Gardens of Europe on the website of the WeFor European Project.

"The young now need to be taught again that life is the most important thing, and a quiet life comes only afterwards."
Marek Edelman

"The history of man is the fight against great evil trying to crush the small seed of humanity. But if man keeps something human even in such moments, evil is bound to succumb".
Vasily Grossman

I was fully aware that the certificates were forged. I deliberately released them to people who had nothing to do with Italian citizenship. What ought I to have done to rescue them?
Guelfo Zamboni