the Holocaust in the USSR 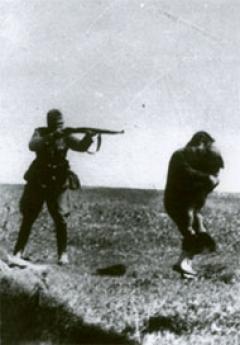 Ivangorod, Ukraine, A German policeman aims his rifle at a woman and her child, 1942.

Yad Vashem's Website dedicates an online exhibition to the extermination of the Jews in the USSR. Pictures, original papers, videos and educational texts document Jewish life before the tragedy, the places and techniques of murder and the commemorations that took place in the aftermath of war.

From the Baltic to the Caucasus, after June 1941 the USSR was invaded by both the Wehrmacht and the SS death squadrons. The Nazis had the task to liquidate all Jews: men, women and children. They shot at entire communities in the woods, Jewish cemeteries, river banks, anti-tank trenches and graves often digged by the very victims.

The fate of the Jews was uncovered by the Extraordinary Commission set up by the Soviets after the Liberation, but then almost completely hidden by the Communist regime.

As Gabriele Nissim and Gabriele Eschenazi reported in their book Ebrei invisibili (Invisible Jews) published in Italian by Mondadori, Communism removed the memory of the Jewish tragedy for many years.