the world ignores his whereabouts 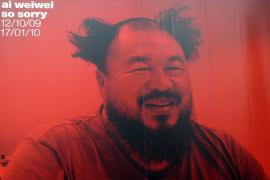 Ai Weiwei's wife was allowed to pay visit to him in jail. The dissident artist, who designed the Shanghai stadium, has been detained since past April. The woman, Mrs. Lu Qing, was fetched by the authorities and escorted to the prison to meet her husband for some minutes. No declarations were issued and no one knows the artist's wherebouts.

12 May
When art scares regimes
Ai Weiwei's exhibition in London
Ai Weiwei is an artist who had the courage to express free thought and was thus punished by the Chinese dictatorship. His studio was destroyed and he has been jailed since past 2 April. From then on no one has heard of him anymore.

A worldwide mobilization demands his liberation. Today in London inauguration of an exhibit of his, called Circles of Animals: in the ancient court of Somerset House there are twelve animal heads made of bronze made by the artist, who revived the traditional Chinese zodiac. The museum's director Gwyn Miles said: "We believe the best help to Ai Weiwei is to show his new works and the power of his vision".

Tate Modern gallery where another exhibition dedicated to the artist has just finished, exposed on his facase a giant solidarity banner and it is possible to sign an international Web petition for his release.