awarding of the winning works 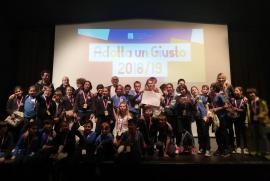 an image of the ceremony

The competition notice "Adopt a Righteous 2018/19" - proposed by Gariwo for the Association for the Garden of the Righteous in Milan (composed by Gariwo, Municipality of Milan and UCEI), this year in collaboration with MIUR (The Italian Ministry of Education, University and Research) -, saw the participation of 300 institutes from all over Italy with more than a thousand works (literary texts, videos, comic stories, photographs) inspired by the stories of the Righteous "adopted", who accompanied the students during the school year. The students have interpreted the stories of the Righteous in a creative and exciting way, making them even more alive and current.

At the award ceremony, held May 13 at the PIME Theater in Milan, more than 600 students and teachers were present: this is a great success on Gariwo’s aim to spread the importance of memory among the young generations for building a better future. The day was opened by the President of the municipal council Lamberto Bertolé, then there have been speeches by Gariwo Chairman, Gabriele Nissim and the Head of the didactic Commission of Gariwo Anna Maria Samuelli. She presented the artistic and literary works carried out in the schools on one or more figures honoured at the Garden of Milan Monte Stella hill and in the Virtual Garden of Monte Stella hill starting from the phrase "There's a tree for every man who has opted for the good". Actors Luca D'Addino and Veronica Franzosi read some excerpts from the winning works, making the suggestive texts written by the students on the scene.

A Moving testimony was that of Eugène Muhire Rwigilira, a survivor of the genocide in Rwanda, who recounted how during those terrible days of 1994 there were some Righteous who opposed the evil, helping and saving the persecuted and demonstrating how, even in the darker moments, we can all preserve our humanity. Then, Vito Fiorino, the "Righteous of hospitality" at the Virtual Garden of Monte Stella hill, spoke of the Lampedusa's sinking of 3 October 2013 along with one of the Eritrean boys rescued by Costantino Baratta, Righteous at the Garden of the Righteous Worldwide of Milan.

The winners were awarded by the jury composed of Franca Schiavon of the Municipality of Milan, Giorgio Mortara of the UCEI, and by the didactic Commission of Gariwo.

Award ceremony of the contest "Adopt a Righteous"