"Comics and memory: The Righteous Speak to Young People"

From Jan Karski to Peppino and Felicia Impastato 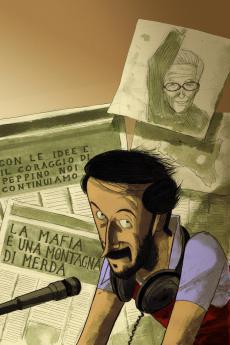 The teaching project "Adopt a Righteous", promoted by Associazione per il Giardino dei Giusti di Milano, goes on featuring a special event for Holocaust Memorial Day 2016, for classes of all levels of education. The event will take place at Teatro Elfo Puccini of Milan on 28 January at 9.30 a.m.

In the early morning, comic strip designer Lelio Bonaccorso will show this drawing boards, will tell about the birth of his work dedicated to Jan Karski and Peppino Impastato and will talk about the importance of comic strips as an artistic genre to pass on the tales of the chosen exemplary figures  to the younger people.
Maria Luisa Impastato, Peppino's niece, will bear testimony, accompanied by actor  Lorenzo Randazzo - starring as Peppino in I cento passi - who will read some poems dedicated to Impastato.

Gariwo director Ulianova Radice will also introduce this year's European Day of the Righteous, dedicated to the civil and moral resistance of women, during which a tree will be planted in honour of Felicia Impastato, Peppino's mother.

The event will feature a further moment, in which the artistic and literary works of the pupils will be introduced. There will be room for the remarks of the Director of Milan's WOW Museum- Spazio Fumetto Luigi Bona, who will award the winners of the bid "Adopt a Righteous" with a visit to the museum and a comic strip lab.