​The frailty of Good. Dialogue on Armin Wegner 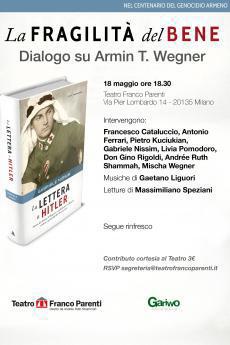 The leaflet of the event

Meeting “La fragilità del Bene” (The frailty of Good), to celebrate the publication of Gabriele Nissim’s recent book La Lettera a Hitler. Storia di Armin T. Wegner, combattente solitario contro i genocidi del Novecento (The Letter to Hitler. Tale of Armin T. Wegner, lonely fighter against genocide cases of the Twentieth Century. Publishing house Mondadori), dedicated to the German writer witness to the key events of the 20th century, the persecutions of Armenians and Jews, wars, the drift of communism in the USSR.

The photographs he took in Anatolia when he was a medical officer in the German army during World War One represent the first and most important of the Armenian genocide, hitherto denied by Turkey. A Righteous for the Armenians and for the Jews, Wegner in 1933 wrote a letter to Hitler to protest the persecution of Jews. Tortured by the Gestapo and forced into exile, he spent the rest of his life in Italy, between Rome, Positano and Stromboli, without stopping to ask himself about the frailty of Good.

The author and Gariwo chairman Gabriele Nissim will discuss it with:

Pietro Kuciukian, Honorary consul of the Republic of Armenia

Piano music by Maestro Gaetano Liguori and reading of excerpts from La lettera a Hitler by actor Massimiliano Speziani.

Courtesy donation to the theatre 3€

All further insights into La lettera a Hitler and the photographs from archivio famiglia Wegner are available in the special page of Gariwo Website gariwo.net/wegner