The army of Syrian art

The Heritage for Peace endeavor 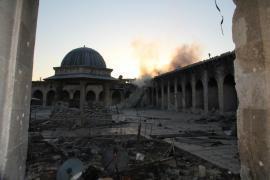 The Great Mosque of Aleppo, destroyed in 2013

Heritage for Peace organization is committed to the support of Syrian people’s efforts to protect and safeguard the country cultural assets, seriously threatened by the conflict and the jihadists’ attacks.

Driven by the idea that such assets could be used as a common ground to develop dialogue and peace in the country, the organization has created an “army of warriors for the art”, aimed to the supervision of the monuments and the research of smuggled artifacts stolen by traffickers.

According to Isber Sabrine, Heritage for Peace founder: “They are archeologists and art experts, but also architects, lawyers, students and common people who want to protect the culture of their country”. The idea of conciliation, on which the organization grounds, seems to work, as the “recruits” of this unique army come both from Assad’s ranks, the regime opposition and the Islamic community.

Sabrine is a young Syrian archeologist, tourist guide from 2005 to 2009; he built a working network of approximately 200 people - whereof 150 people active in Syria - since, in 2011, the blast of the war impeded his return home from Spain, where he went to complete his studies. Heritage for Peace headquarter is therefore settled in Gerona; the idea of the organization is the outcome of the project Sabrine was working on in 2011, dedicated to the management of Syrian assets, with the Consejo Superior de Investigaciones Cientificas (Superior Council of Scientific Investigations) support.

The idea of creating a group of “Monuments Men”, to protect Syrian art, ransacked and destroyed after four year of violence, arises from this young man. The risks undertaken by these men are great, especially now that Isis militias joined the artworks traffickers.

Sabrine’s “warriors” are trained in Lebanon or Turkey; once in Syria, they provide documentary evidences of the buildings damages, they recover and hyde precious objects stolen by trackers, they go in the destroyed locations to try saving intact artworks. This is the only way, according to Sabrine, to contribute to the reconstruction of the identity of a country wounded by devastations that today seem irreparable.