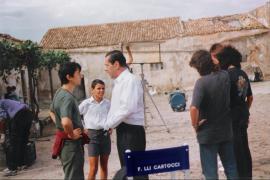 Young Mr. Randazzo on the stage of "I cento passi"

When I starred as Peppino Impastato in his childhood, I was not aware of the responsibility and deep significance of the events concerning him. I myself was very young, just 13 years old, and I knew about his story as told me by my parents, who were friends and comrades of Peppino’s. Every year, since I was very young, I took part in the commemoration rallies in honour of Peppino that took place on 9 May – the date of his passing away – and also in the middle school I attended, people started talking about his tale. And yet, on the set I felt a unique magic. I felt I was taking part in an unforgettable project.

While shooting the movie we breathed a familiar atmosphere… I was the troupe’s mascotte, being one of the youngest people there. I remember with envy the spontaneousness and naiveté of my debut. In our childhood, we have a playful and unaware stare on things, that allows you to follow your instinct and act more immediately.

As I grew up, however, I eventually realised the significance of Peppino’s tale, I started “put my thoughts in order" and being aware of this.

I believe Peppino went through the same kind of understanding experience, with even more dedication and personal involvement. Ever since his early childhood, growing up into a family where his father was a mafia man, he had to choose sides. He was quick-witted, clever, curious, and that made it possible to him to study and read a lot. He was an educated and competent person. All this enabled him to understand the world, starting from his “small familiar world”. Peppino had an amazing courage. A courage that stems from knowledge, that in its turn defeats fear.

We are often scared of something obscure, of which we are unaware. Peppino faced his fear and understood he had to devote his life to fighting the mafia – something intimate and deep for him. He clashed with a narrow-minded village mentality, trying to bring openness and enlightenment. He was a leader and managed to gather people with his passion for politics and legality. He was the protagonist of many activities, including newspaper and radio, unauthorised demonstrations, distribution of leaflets and sit-ins. Thanks to his education, the wind of change that blew in 1968 reached also the province of Palermo. He fought something, which he knew all too well, because he had grown up in it. This was his strength.

I am deeply connected with these unique and exemplary events. This is why I kept in touch with Peppino’s family over the years and I became partner of the Casa della memoria (House of Memory) of Cinisi. I have always taken part in the activities held by Casa della Memoria, both as the commemoraton of Peppino’s murder on 9 May, that has now reached the 38th edition, and as the events that take place all around the year in Cinisi are concerned, such as meetings about food, ecology, safeguard of the territory, management of the good seized to the mafia. In 2009 I joint the national civil service at Casa Memoria and I dealt with cataloguing the books of the library of and by Peppino and welcoming the many visitors who come to see us in Cinisi. We have accomplished many projects, all based first of all on legality and the opposition against the mafia, but specifically targeted to the pupils and students of the schools of Cinisi and the province of Palermo. We also tried to update Peppino’s ideas, carrying out a lot of political activity for the safeguard of the territory and the environment. At the core of all this there is always memory, because precisely the example and memory of Peppino urge us to go ahead. We engage ourselves as we can, putting at the Casa Memoria’s disposal our spare time, which sometimes is really little, to try and carry out activities able to gather and stimulate the reflection of the people of our same age, first, who are often indifferent and insensitive towards legality. Recently I have also felt responsible for trying to understand and remember as many things as possible from the tales of those who have known Peppino – like my father and other 60-year old people – and I often find myself keen on listening to them for hours, so that memory does not go lost with the passing away of their generation, but goes on in us with their ideas and courage.

My example of how the ideas of Peppino’s and his comrade’s are applied to reality are my parents. They have lived in those years and have put into practice every day of their lives all those values of legality, non violence, respect of the others, of selflessness as opposed to self-centring, humility and courage. I grew up with these ideas, and today I also try to put them into practice on a daily basis.

Lorenzo Randazzo was born in Carini on 30 January 1987. He obtained his diploma from the liceo scientifico Galilei of Palermo and graduated in Economics and Finance from the University of Palermo. He started his artistic career when he was very young. In 2000 he starred as Peppino Impastato in his childhood in the movie “I cento passi” by M.T. Giordana. This was followed by appearances in the movies “Il principe e il pirata” by Leonardo Pieraccioni, “Alla luce del sole” by Roberto Faenza, in an episode of “Il testimone” on Mtv, anchored by Pif, and in “Squadra Antimafia 6”. Currently he attends the Schools of Performing professions at the theatre of Palermo run by Emma Dante. He is partner to the association Casa memoria Felicia e Peppino Impastato of Cinisi.