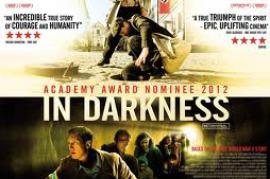 Show bill of In darkness

Screenwriter of In darkness David F. Shamoon shared with Gariwo his experience and knowledge about Agnieszka's Holland movie and the incredible story of Polish Schindler Leopold Socha.


It took one sentence in a Toronto newspaper to start an eight-year journey that took me to the sewers of Lviv, Ukraine (Lvov, Poland during World War II), a bitterly cold set at the legendary Babelsberg Studio just outside Berlin and a dark editing room in Toronto. It also took me into the darkest recesses of human history.


The article was about The Righteous, Sir Martin Gilbert’s book that cataloged those incredibly courageous individuals who risked not only their own lives, but the lives of their families, by helping Jews escape the clutches of the Nazis during the Holocaust.


The galvanizing sentence went something like this: “A Polish Catholic thief hid a group of Jews in the sewers of Lvov, which he knew well because that was where he hid his loot and actually got a job as a sewer worker.” I immediately wanted to know more about this person because the sentence raised so many questions, chiefly: what makes a criminal, or anyone for that matter, risk his life and his family’s to help complete strangers? I grasped that there must be a profound emotional, psychological and physical journey that this man undertook.
After I contacted him, Sir Martin very graciously directed me to a whole book about this story, In the Sewers of Lvov by Robert Marshall. Published in 1991 and no longer in print, I managed to purchase the last copy from Amazon. As I read it, the story electrified me because it had every aspect of great drama in it: a flawed hero, nerve-shredding suspense, romance, heartrending tragedy, real characters caught up in a desperate situation. It even had dark comedy: Leopold Socha, the thief and sewer worker, had earlier robbed the jewelry store belonging to the uncle of Paulina Chiger, one of the Jews he was protecting! As a screenwriter, the story was irresistible.


But as the son of parents who had to flee Baghdad to escape Iraq’s persecution of Jews, it also spoke to me on a very deep level. So I personally optioned the film rights to the book and spent the next year researching the era and writing the script ‘on spec’. Early on, I made two very critical choices: I would not sugar-coat any of the Jewish characters – they were all deeply flawed, some of them former con men or black marketers. There were class divisions among them which collided, especially between the upper-class Ignacy Chiger and the rough-hewn Janek Grossman who abandoned his wife and daughter. The second choice was to limit the depiction of the atrocities. There were two reasons for this: audiences are already aware of the extent of the horror and violence, thanks to films like Schindler’s List. The second reason was more mundane: as I did the research, I realized that many of the actual events were too horrifying to even attempt to recreate. In fact, to try would be an act of disrespect.


Actually writing the screenplay presented some other challenges. Not much is known about Leopold Socha the man, so his journey from an opportunist who helped the Jews purely for money to someone who felt compelled to save them at all costs – including the lives of his beloved wife and daughter – had to be dramatized for the audience. Some characters were created while others were eliminated or combined for clarity. Some events were altered or invented. But the main thrust of the story remained intact. As Krystyna Chiger, the only living person who was actually there, said after seeing the film, “You captured it. That’s how it was.”


After I finished the script, a well-known Hollywood director and producer wanted to make it, but I felt strongly that this story should never be ‘Hollywoodized’. A friend in Britain suggested the ideal director: Agnieszka Holland. As a long-term admirer of her work, I knew that he was absolutely right, so I sent her the script through her agent, who never showed it to her (he is no longer her agent!). As it turned out, one of the production companies to which I sent the script was The Film Works, whose principals Eric Jordan and Paul Stephens, had worked with Agnieszka before. I knew that I had found the ideal partners.


But that was just the beginning of what would be another half decade of trying to get the film made. Agnieszka, although very helpful in offering suggestions from the beginning, turned the project down – twice. The key reason was that we – and by now that included the German co-producer Schmidtz Katze Filmkollektiv and the Polish co-producer Zebra Films – insisted that the film be in English. Agnieszka felt equally strongly that the story, which is so rooted in its place and time, should be told in the original languages: Polish, German, Yiddish, Ukrainian, etc. If we wanted her as the director – and we really, really did – the film had to be in those languages. As it turned out, she was absolutely right. Her commitment to authenticity was unwavering: for example, she made sure that the specific dialect of ‘Lvov Polish’ was used.


Working with Agnieszka and the producers, the script went through many drafts. The bane of every screenwriter, especially a relatively inexperienced one, is over-writing. Ms. Holland made sure that didn’t happen. In addition to being a huge privilege, collaborating with her was like getting a PhD in writing for the movies.


The dream of every screenwriter is to see the images that have only resided in his or her imagination appear on the screen. In the case of In Darkness, they actually exploded. Led by Agnieszka, all the other artists, especially the superb cast, poured their hearts and souls into the film, and I think that it shows. Forget about the “glamour of filmmaking”, this was incredibly hard, sometimes backbreaking work. My gratitude to every single person involved is immeasurable.


My main hope is that Leopold Socha’s example will inspire others as much as it has inspired me. Like many of the other Righteous, he was no saint, which is what makes this a universal story. He was just an ordinary man who made some crucial choices that led to extraordinary deeds.