A culture of Peace to unify Syria 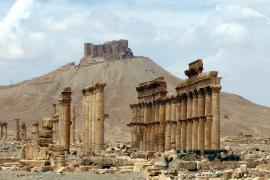 Heritage for Peace is an organization focused on the support of Syrian people in their struggles for protection and safeguard of the country cultural heritage. The project was developed after the idea of Isber Sabrine, a young Syrian archeologist, headquartered in Gerona, where Sabrine went to complete his studies, just before the conflict broke out.

Together with Isber, we talked about Palmyra, the link between culture and identity and his work for Heritage for Peace.

In these days a lot has been said about the Isis conquest of Palmyra and the risk of the site destruction. What is happening?
After being near to the site for a while, a few days ago Isis got into Palmyra. This was a big surprise to me: how was it possible that fundamentalists arrived so fast? Isis left Raqqa and arrived in Palmyra in two days, but how was that possible if the International coalition is standing over the area?
As soon as I read the news, I called the Director of the Antiquities of Palmyra - a friend I knew for so many years. He was worried about the Museum, where the collection of the Real Temples is guarded, so I asked him what was it possibile to do. The answer was immediate: “we need helicopters to transfer the evidences”.
Then, I tried to get in touch with the coalition. In order to get those means, though, we needed a political agreement; no initiative was possibile, neither with UNESCO. We also talked to the Assad’s army, asking to send military support. The day after though, on the 16th of May, I lost the contact with the territory of Palmyra. Phones are out of order, Internet doesn’t work - today still I’m waiting for news about my friend.

No action was possible, then, for Palmyra?
In the last days several clashes spread out in the area, between the regime and Isis. Two days ago, the Director of the Antiquities of Damascus called me, to inform me they managed to transfer the Palmyra Museum Collection, using trucks.
However, this is not enough: we need a greater international intervention, organized by UN, to defend the city; at least, we need a resolution able to recall the world duty to save Palmyra. We are working for this, in a initiative that resembles the one thought for Timbuktu, in Mali.
Isis wanted to take Palmyra because it a worldwide-important site - a thing that will surely help to make great propaganda. This is why we even asked ourselves whether it was opportune to talk with the media, or if, by doing so, we would have helped the IS strategy. Nevertheless, fundamentalists continue their brutal advance, with or without our intervention on the media, so we decided to talk about it and show that this attention does not come only from Syrian people, but from all around the world.

Before being an UNESCO World Heritage site, Palmyra is part of the Syrian cultural heritage. Does a bond, between art and identity, exist?
Absolutely, it does. If they destroy Palmyra, indeed, we loose a great symbol of Syrian identity. Unfortunately, Syrian people - and Arabs, more in general - have a huge identity problem. If this chaos, in the last years, was possible to happen, it is due to the lack of a strong cultural identity, a national feeling. Here, we can only choose between dictatorships or fundamentalists. All of this helped Isis, which took advantage from this situation in order to look attractive, by offering the young people - who felt lost in a religious State - money, power, rights and opportunities.
Now we are committed with an important project: reconstructing the great Syrian identity after the war. We work in refugee camps and we want to use cultural heritage as a psychological support for children who have been traumatized by the conflict. We want to tell them “guys, your country is not a space destroyed by war, but a place with a great culture, a great history. It is a country with so many things to offer”. We work for what we call culture of Peace, because Syria belongs to all Syrians; our heritage must unify, because we - Christians, Sunnis, Alawits - do share this common history. And it is very important to work with children, hit by all of what is happening, but they are the hope for our future.

Do you think that the conflict is due to the Arab spring failure?
Surely it does. The insurgencies did not work, they couldn’t do what the people expected them to do, fundamentally because there was no basis for them. In order to build a democracy in a country, people must have rights, and this is what was missing. Radicalism also increased, also as a consequence of the economic crisis that hit those countries. There is no job, and desperate young people got captured by Isis promises. This is the bond between Arab spring and the current situation. Most of those movements failed, a part from Tunisia - even if, as a paradox, Tunisia is the country from where most of the young people leave, in order to join Isis forces.

Now you live in Spain, where you went before the Syrian conflict spread, in order to end your studies. How do you feel about this situation?
Five years passed since I was last able to get back to Syria, or seeing my family. During the first year of the conflict, I felt lost: I could not accept what was happening, because I knew what Syria was like - it was my country, I knew it well as I worked as a touristic guide for several years.
In the course of time I decided to deal, with Heritage for Peace, with the Syrian artistic heritage. Our work - not funded yet, as we are all volunteers - is based upon all of Syrian people commitment, both on the side of the regime and of the opposition. Archeologists, art experts, but also students, professors and activists are involved - anyone willing to do something to help the culture of his country. And now the first positive feedbacks are coming: the Italian government, for example, asked us to display some proposal for projects in which to intervene.

In the last days people focused on Palmyra and the safeguard of the artistic heritage. But in Syria, since the beginning of the conflict, there were millions of displaced people and hundreds thousands victims. Do you think that the media gave more importance to the first kind of facts, compared to the latter?
The media, since the beginning of the conflict, talked much about Syria. Despite this, the news about Palmyra is now more “attractive”, and therefore people are likely to discuss much about this. Anyway, I think we must remember that human life comes before monuments and stones.
When we started our work, we asked ourselves what could we do in order to help, and we understood that the cultural heritage, as well, is important for people, for they lives, for they souls. We can only do this, we cannot go fighting. The most important thing is human life; we can’t stand still, so, if it is possible to do something, why not doing it?