​When self-sacrifice leads to evil 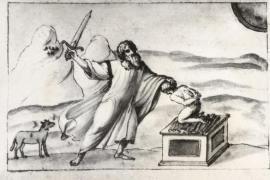 The sacrifice of Isaac

Does self-sacrifice necessarily lead to the accomplishment of Good? This is the key question that the stimulating book by Israeli philosopher Moshe Halbertal, On Sacrifice, recently published in Italy by Giuntina, raises on this subject.

An established habit to follow a certain Catholic moral would seem to suggest so.

Those who renounce themselves in the name of an upper good, be that a cause such as revolution, self-sacrifice at war, or putting one’s aspirations aside to fulfill the dreams of one’s parents, would deserve our appreciation at any rate.

Things are not really so easy.

Let us then start, as Halbertal suggests, from the sacrifices to God that are described in the Bible.

Those who bring gifts to the Temple expect praise. In case this does not happen, he feels humiliated, as happened to Cain. In the Genesis it is narrated that God appreciated the offer made by his brother Abel, who “brought of the firstlings of his flock and of the fat thereof”, while He was indifferent to “the fruits of the soil” brought by Cain.

From then on began the rage of Cain, which would lead him to murder his brother.

This is a similar situation to the one that many people experience when they bring presents to others and they do not feel appreciated. It is not the gift as itself that makes them satisfied, but rather their quest for recognition.

Thus, when they have nothing back, they get offended. This is why bringing gifts is a real art. People must make sure their friends does not at all feel obliged to give something back and only be content with their own deeds.

And what about Abraham’s behaviour? He was prone to sacrifice his own moral duty as a father to follow God’s will.

In the name of faith he should have given up his conscience. What though often is untold is that the true victim of this story is not Abraham, but rather Isaac, who had to be sacrifced in the name of a loftier ideal. In some religious traditions, the Israeli philosopher explains very well, sacrifice atones crime under the illusion that the criminal is the victim, since he sacrificed his own conscience.

This reversal of roles between victims and executioners was brought to the extreme consequences by Nazism and Communism.

Himmler, as he explained the final solution to his officials, incited them to sacrifice their own feelings in the name of the glorious fate that expected Germany: “We realise what we expect from you is superhumanly inhuman”.

The victims would die, but SS officers would pay the highest price in that they would sacrifice their highest ideal: overcoming their humanity.

Sense of guilt is usually a feeling that prevents people from doing the worst things. Instead, in Himmler’s opinion those who were able to silence it would probably feel a major suffering, but that way they would turn into heroes.

So, as Halbertal acutely explains, the villain, by relishing his sense of guilt, sees himself as the one who suffers from a far greater damage than the one he himself inflicted. He identifies those he has harmed as the guilty for his pain. This is why he feels rancour for those he harmed: to him, they are his torturers and he thinks he is their victim. It is him who is sacrificing himself.

This theme was dealt with by writer Vassilij Grossman, who in his book Life and fate described the activity of the secretary of the Ukrainan Party in charged of controllino and punishing the so called people’s enemies, pointed out that his most burdensome task was that of silencing his conscience for the sake of the party’s mission. And in case, after many years, an informer found himself in front of a gulag survivor, he hated the man he was such a nuisance to him, as Grossman noted in Everything flows. It was the victim that persecuted him even just by existing.

If we then look at the fundamentalist terrorists of Isis and Al Qaida, we can notic two different yet similar patterns of behaviour.

Those who slit the throats of the victims before a phone camera and then proudly spreads the pictures in the Web, does not only seek to terrorise the public opinion, but he also loves to appear before his followers like a true hero, because he is able, in the name of his mission, to sacrifice the most human feelings of human pietas.

Those instead are willing to commit suicide in a terror action, whose goal is the murder of a crowd of people, does not only bring self-sacrifice to its most extreme consequences, but also ennobles ennobles the most awful crime with his death. It is not by chance, in fact, that suicide terrorists in Palestine are revered by Hamas, because their gesture legitimizes even the most savage and revolting deed against one’s enemy.

Self-sacrifice hence enables any kind of violence, because it allows for a role reversal between the aggressor and the victim. Terrorists turn themselves into the victims of the violence that is committed.

Ivan Kalialev, the hero in Albert Camus’ drama The Righteous, refuses the pardon after killing Granduke Sergej, the uncle of the Russian czar. To the Grand Duchess offering to pardon him he replies: “If I were not to die, I would indeed be a murderer… May death crown my work with the purity of the ideal.”

He is willing to die because he is persuaded that his death will atone the action from any accusation of selfishness: it would redeem it and make him immune from every blame.

Maybe this was the hidden thought of Mohammed Atta, one of the hijackers of 9/11. He could crash the plane without any scruple against the Twin Towers of New York, because by deciding to die he felt his conscience was clear.

He felt pure because he also was headed for martyrdom.

Similar mechanisms are in place in all wars. Very often, soldiers do no task themselves any questions and feel their conscience is clear when killing other men, because they are willing to risk their lives.

“Since I am ready to die, I am on a par with the enemies I am compelled to eliminate.”

This feeling then couples with an other one: “Since my comrades have died for me, I have the duty to keep on fighting in their name.” Self-sacrifice calls for another self-sacrifice, in an endless circle.

The only antidote to this perverse drift, as suggested by Hannah Arendt, is the capability to think and judge from different viewpoints. It is not always true that those who are willing to sacrifice are “righteous” people.