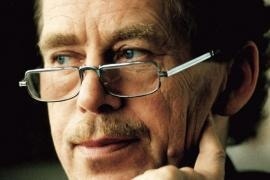 On 5 October, Václav Havel would have turned 80. We owe him the struggle against resignation in Prague after the Soviet invasion of 1968, the birth of the Charter 77 movement, the end of communism in Czechoslovakia,the painless divorce between Czech and Slovaks after 1989, at the same time as the bloody war between the nations in the former Yugoslavia broke out, and the reunification of Europe that had been split by Moscow's imperial policy.

We owe him a very significant and extraordinarily topical political thought. He taught us the value of moral resistance in a totalitarian system. While today we are just a Facebook click away from changing the world while remaining sitting in front of our computer, Havel in the Seventies used to invite citizens to add their signatures to the manifesto of the Charter, to prove it was possible to establish again from the grassroots a new social and political life that would place center stage the values of dialogue, friendship and the respect of human rights.

Havel had adopted Hannah Arendt's and Aleksandr Isaevič Solženicyn's thought, according to which communist power was neither an unbeatable machinery, nor a demoniac monster, but rather a very fragile structure that relied on the people's passive consent.

If overnight - so went his message in the Seventies, from his key book The power of the powerless - Prague's citizens had started to experience on a daily basis a different life based on new values, little by little power would erode and would find itself alone, until it went exhausted.

Havel, differently from what Italy's fans of Grillo believe, did not think change could happen by occupying the power from the top by simply replacing the dishonest on power with honest people, but rather he thought it would be necessary to start a great educational pathway through a slow ripening of society from grassroots.

In fact, unless the people's way of life in civil society changed, the political power would never reform itself. In the opinion of Havel's, an anti-Jacobin, the issue was not about conquering t he palace, as by the way the communists had done, but to sow very patiently new life practices.

This is why, not only from a tactical point of view, his movement Charter 77 never openly advocated change in the political system, as going too fast would not only lead to political defeat, but would not create the conditions of a moral ripening of the country. First, one needed to build a new life, no more based on the corruption of people, but centered on the authenticity and a quest for truth, and then it would become possible to achieve change at the top.

Though Havel, when he invited the young people from Prague to live the truth, did not talk about an absolute and definitive truth, because he thought the truth was always partial and on the move. He loved the taste of dialogue and the pleasure to experience the human plurality. This is why in the Charter 77 movement we find together men and intellectuals who are completely different from each other - liberals, socialists, communists, Jews, Catholics, Protestants - but united by the common fate of their dignity, humanity and partiality. None of the participants was worried about imposing in an authoritarian way his own point of view, as everybody were convinced that the verification of their opinions could only result from an uninterrupted dialogue with those who thought differently and from putting those opinion to the test within a common experience. Only the results and good deeds bore witness to the truthfulness of one's own opinions.

While today in Europe, once again, the idea of an enemy to fight against regains popularity (the enemy are the politicians for the Grilllo fans or the indignados, the European Union for the supporters of the Northern League, migrants for the xenophobics) Havel instead thooght that the idea of Europe (with the end of communism) would mean overcoming the idea of the foe to be viewed as an embodiment of evil and creating a sharing horizon. A new democratic power could be created in history when people decided to do things together, and not when they fought each other, living the illusion they could do without the others and being the only repositories of the good and true. It was the recognition of one's own fragilities and partialities that created the conditions for dialogue and sharing, because you would go nowhere alone. Then it was very popular in Prague to talk about the 'solidarity of the exhausted', to indicated the strength that can arise from the weaker.

Havel would turn 80 if he were alive now, but today he would be the youngest of the Europeans, not only because he was a great lover of jazz and rock'n'roll (in particular of Frank Zappa) but also because he had the taste for a full, rich and happy life.

I was lucky enough to get to know him, while he took me to visit with great satisfaction the underground cultural life, theatres and flying concerts, and he used to laugh about my small Sony video-camera that would allow me to have some small cassettes circulated abroad without the officials, who did not know about the new technological innovations, to be able even to realize.

Havel would still be very young, because in the face of Europe's crisis, he would not get depressed, as if that were an ineluctable doomed fate leading our continent to decadence and division, but rather he would roll up his sleeves with the spirit of Charter 77. As yesterday it was possible in Prague to defeat a dictatorship that had lasted for nearly half a century, still today the moral revolution of the powerless could light the flame of Europe. Those who love the taste of democracy and the richness of human plurality cannot avoid this challenge.