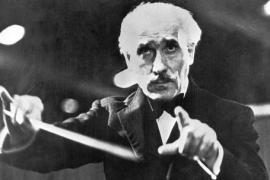 On 22 January at noon, a cork oak will be planted in honour of Arturo Toscanini in the Auditorium Parco della Musica of Rome, which on 27 January will host the concert for Holocaust Memorial Day: “Toscanini: The Courage of Music".

The pearl fisherman, wrote Walter Benjamin, is the one who delves into the past and brings back into the spotlight the people’s thoughts and deeds that retain an universal value, which previously had laid crystallised at the bottom of the abyss. If there were no poets and narrators able to let a hidden and submerged tale of courage resurface, people’s best deeds would be lost to oblivion. The staunchest supporter of this idea has been Israeli judge Moshe Bejski, the great personality behind the creation of the Garden of the Righteous in Jerusalem who, after being rescued thanks to Schindler’s list, devoted his entire life to the quest for the people who had spent their lives to help the Jews during the Holocaust.

While doing his job, he told me in the long conversations that made it possible to me to tell his story in my book Il tribunale del Bene, he had reached the following conclusions.

There was no place in second world war, be it a parliament, a factory, an office, an orchestra or even a concentration camp, where it would not be possible to do something to save the Jews. The reason was very simple: it was always possible to make a choice and feel the call of one’s conscience, because every human being can act within his small span of control to push history towards a different direction. Destiny is never preordained. Rather, people’s personality can play a part in determining it. Another point in his reasoning that had struck me was that there cannot be any preordained schema of who is going to be the Righteous, because his experience had shown him that the imaginative resourcefulness of Good far outstrips the dynamics of evil and it is necessary to be very humble when investigating human behaviour. Thus we can feel moved and surprised by deeds that would otherwise remain in the shadow and would be soon forgotten despite their greatness.

It is of Moshe Bejski that I thought, when I reflected on Arturo Toscanini’s behaviour towards the Jews – events that are eventually brought back into the spotlight by the concert that will be dedicated to him on Holocaust Memorial Day. Toscanini, a staunch anti-fascist, had no power to stop fascism and the anti-semitic laws and for how disgusted he had to move to the United States, but he put all his fame and prestige at the disposal of Bronislaw Huberman’s project to create an orchestra in Palestine, thus taking a hundred Jewish musicians into safety. That orchestra was the symbol of moral resistance against Nazism. This is why Toscanini wanted to direct it on 26 and 27 December 1936 in Tel Aviv.

Someone could argue that Toscanini did not risk his own life to help the Jewish musicians and his deed cannot be compared to that of Schindler or Perlasca, but Moshe Bejski strove for all his life to teach people that the Righteous men are no heroes or saints called to self-sacrifice, but rather and more simply, they are people who respond to indifference and take on responsibility for the persecuted in the gloomiest times of humanity. Toscanini has thus been one of the Righteous of the Jewish secular tradition. He used his personal power, in music, which he mastered, to launch a message of solidarity. Many others intellectuals and conductors like Herbert von Karajan would instead be silent. This is Toscanini’s moral lesson.