The Righteous' place is besides the Warsaw Ghetto Insurgents'

the quarrel about a monument to Jews rescuers 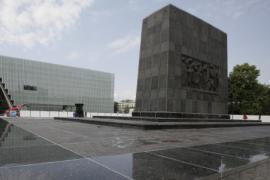 The Museum of History of the Polish Jews

On the 70th anniversary of the Warsaw Ghetto Uprising, an institution which is likely to be Europe's most important Jewish Museum is being inaugurated in the Polish capital. The government decision to build a memorial in honour of the Polish Righteous besides it has sparked fierce arguments.  "It is neither the right place nor the right moment now. In the place of the uprising and suffering we shall discuss the pain of the Jews, not Polish heroism ", stands in an open letter written by the Polish Centre for Holocaust research of the National Academy of Science.


Konstanty Gebert, a Jewish intellectual and a hero of the Solidarity movement, has declared his dissension to this opposition. His reflections follow (the text was originally written in Polish, then translated into Italian by Annalia Guglielmi and eventually translated into English by Carolina Figini of Gariwo Editorial Staff):


The Holocaust Research Centre of the National Academy of Science has overtly taken sides against the project to build a monument for the Poles who rescued the Jews in Warsaw, on the Square of the Ghetto Heroes, besides the monument to the Uprising Heroes and the Museum of the Polish Jews. This is an influential view: Barbara Engelking, Jan Grabowski, Jacek Leociak and the other researchers of the Centre have carried out an enormous work to deny the heroic, yet unfortunately false, image of the relationship between Poles and Jews during Nazi occupation.


From this point of view their work reminds, mutatis mutandis, the similar effort made in the Nineties by the Israeli “new historians” Benny Morris, Ilan Pappe, and Tom Segev to expose the reality behind the heroic myth of the Israeli Independence War of 1948.
In both cases these brave researches have shown that heroism was accompanied with betrayal of the essential values, and greatness with terrible crimes. In both cases they have been condemned not only by the people in bad faith, but also by respectable people, who deemed that such criticism could sling mud at the sanctity of the rescue deeds. Identifying myself both with the Polish and the Jewish history, I understand those who have been outraged on one side and the other, but I prefer running the risk of casting aspersions on something than allowing greatness to become an alibi for the villains.


Nonetheless, coming to terms with a national myth is never a safe activity. Twenty years after their important publications, the Israeli erstwhile “new historians”  have very radical stances, complete opposed to another. Pappe has become the ideologue of those who criticize not only the crimes committed during the birth of the State of Israel, but even its very existence. On the contrary, Morris nowadays believes that the ethnic cleansing carried out at the time was not enough, and in his opinion this is why Israel keeps facing threats. Therefore, being too uncompromising can confront us again with the Latin formula pereat mundus, fiat justitia (Let justice be, though the world perish).


I understand these researchers of the Centre as they state that placing a monument to the Polish Righteous besides the monument to the Ghetto Heroes can become a “triumph of national self-complacence”. Essentially, such a closeness between the two monuments could serve the myth that “Germans killed them, whereas we rescued them”. This vision of the past is simpler and more pleasant than acknowledging that “Germans killed them, denunciators sold them, and the few people who have rescued them lived in the fear of the former and the latter”. Some Righteous people had to cope with this fear even fifty years later, in free Poland. I know, because I heard it from them. And this makes it even more important to adequately acknowledge the Righteous. After many years the Wolna Rzeczpospolita itself has gently put forward that the Righteous and not their far more numerous enemies represented Poland at the time.

The square surrounding the monument to the Ghetto Heroes will become the space of a symbolic interpretation of the historical chapter about the life of the Polish Jews during the occupation. Now already there are a small monument remembering the Underground Council for the Rescue of Jews “Zegota” and a bigger one remembering the visit of German Chancellor Willy Brandt, who made a big gesture by falling on his knees before this monument. If we failed to find a place on that square to remember all those heroes, who within “Zegota”, but not only there, rescued the Jews, we would give rise to a triumph of national contempt. As a Jew and a Pole I would feel offended by this absence.


Clearly, memory should not turn into facile triumphalism, which the Centre researchers are fairly warning us about, and we will also have to see that the artistic form and the historical message of the monuments are adequate. But we shall not forget about its educational value either. The square and the Museum will welcome a lot of tourists. The Polish ones, who I hope are aware that the largest national group of Righteous recognized by Yad Vashem is the one from Poland, would not understand the reason of the absence of a monument in their memory on the square. The foreign one, who often do not know about the number of Polish Righteous, could get to know about it through the monument.


A recent interview with Professor Jasiewicz clearly shows that we are threatened not only by self-complacence, but also by the most blatant forms of anti-Semitism, a vision of history according to which Jews are the den of all evil and are therefore responsible for their own destiny. The way Web users have supported this idea provides major evidence not really of the fact that anti-Semitism is widespread in Poland, but rather of the fact that Polish-Jewish history is described as a zero-sum game: if the Jews lose, the Poles win and vice versa. This attitude is a defensive reaction to what we know nowadays about the fate of the Polish Jews during the occupation. It is clearly absurd, but nonetheless we should not undertake any initiative bearing a potential for strengthening it.


Therefore I cannot even comply with the requirement put forward in the Centre researchers’ letter “for the area of the Warsaw Ghetto to be kept as an intangible symbol of the remembrance of the murdered Jews”, not allowing exchange with other memorial experiences. It is true that some attempts to keep the Polish memory alive can fairly be criticized from a historical and artistic point of view; this was explained in a convincing manner by Elzbieta Janicka in the paper Festung Warschau. Yet, creating a kind of a reservation for Jewish memory only would mean excluding it both from Polish memory and the living fabric of society and saying these two memories would not be close to each other, but against each other.


Of course, this has often happened above all in the first fifty years after the war. But it is still true that this clash has distorted and misrepresented both memories. The Museum of History of the Polish Jews must be the place where they come to terms, although this dialogue is not always comfortable. Creating a ring all around where some memory is excluded would undermine the Museum’s mission and would also be simply unfair towards the current non-Jewish inhabitants of the former Jewish quarter and their rightful need for memory.