The Righteous of our time, for a new “Charter 77” 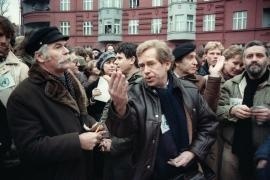 Vaclav Havel with other signatories of Charter 77, Rudolf Battěk and Ladislav Lis

Hereafter we are publishing Gabriele Nissim's reflection published on 12 January in Avvenire, on the occasion offered by the presentation of the series of meetings“The Crisis of Europe and the Righteous of Our Time”, organized by Gariwo in cooperation with Teatro Franco Parenti and under the patronage of Università degli Studi di Milano and Fondazione Corriere della Sera. The calendar of the meetings, which will start on Tuesday 17 January at 6 pm – when historians Marcello Flores and Yair Auron and philosopher Gérard Malkassian will discuss “Genocide prevention” at Teatro Franco Parenti – is available in the box of Further Insights.

We know who the Righteous of the past have been: those who, in the gloomy times of the humanity from the Armenian genocide to the Holocaust, the Stalinist Gulags, the mass atrocities in Rwanda, Cambodia and the former Yugoslavia, have felt sympathetic to the victims and sought – mostly alone – to rescue lives and defend human dignity.

But who are the Righteous of our time? It is right to repropose this category today, to point out that we need people who can again save the humanity from the perils of a new savagery, caused by the resurfacing of nationalism, the crisis of Europe, the bloody wake of the suicide attacks carried out by those who dream of the Islamic apocalypse – as writes Olivier Roy in Le Djihad et la mort, his most recent book.

We will try to answer this question within the series of conferences “The crisis of Europe and the Righteous of our time”, scheduled from 17 January, which Gariwo organized in cooperation with Teatro Franco Parenti, under the patronage of the Università degli Studi di Milano and the Fondazione Corriere della Sera.

From now though we can state two things. Between the Righteous of yesterday and today there is an affinity: they take up personal responsibility in abnormal times, when a political, moral and institutional void appears, which risks to let the worst sides of the human being emerge.

The Righteous’ example has a beneficial effect, not only because these people are the protagonists of exemplary deeds in the human and political area of their sovereignty, but because they become a factor of emulation for the whole society. This was explained very well by Baruch Spinoza, when in the fourth part of The Ethics he put forward the importance for human beings to surround themselves of virtuous people, because they could strengthen their desire to live according to reason and thus create a chain reaction. “The good, which a man desires for himself and loves, he will love more constantly, if he sees that others love it also; he will therefore endeavour that others should love it also; and as the good in question is common to all, and therefore all can rejoice therein, he will endeavour, for the same reason, to bring about that all should rejoice therein, and this he will do the more, in proportion as his own enjoyment of the good is greater.”.

Furthermore it is the power of attraction of Good that on the political level, when people fall prey to wrong ideas and see in the other an enemy, or remain indifferent to the suffering of the other human beings, can determine a grassroot revolution able to change not only the moral orientation, but also the functioning of institutions.

This was the great political intuition of Václav Havel, when in Prague he launched the movement of Charter 77. He then gathered people from different walks of life, socialists, communists, liberals, Catholics, Jews, and he invited them to defy the totalitarian Power not with force and violence, but through moral behaviours, by which everybody had to commit himself to safeguarding human dignity, the sake of plurality against the single state thought, the pleasure of dialogue and diversity.
He then indicated a method of discussion to the Charter’s signatories: nobody would have to impose to the others in an authoritarian way his point of view, but rather they would have to verify a correct opinion only through an interrupted dialogue and a continuous confrontation within a shared experience. Good were those deeds that bore witness to the validity or not of one’s thought.
This way, Havel did not only question, as Gotthold Ephraim Lessing had done in German Enlightenment, the idea that there could be any bringers of a definitive truth. He also imagined that totalitarianism would have been defeated only when human beings would have understood that a better world would stem only from a democracy of friends, which would eventually eliminate the idea of the political enemy.

We will precisely want to draw inspiration from this experience, that has represented a great laboratory of a common ethical behaviour, to propose a Charter of Value able to inspire a code of behavior for people from different political, religious, cultural walks of life, in the moral crisis that risks to destroy Europe.

Today’s challenge in facts demands a shared plural movement, not only the testimony of a few people.

Being Righteous people today first of all means not letting oneselves be drawn into the culture of hatred and of the enemy that has violently reappeared on the public international stage, and instead act as promoters of dialogue and sharing with the others, in a context where a huge part of the European public opinion, in good faith, is convinced that closure within the impassable walls of one’s own nation, religion and identity is the main road to overcome anxiety and fear of an uncertain future, generated by the unresolved problems of globalization.
It suffices to have a look at the social network, as Zygmunt Bauman had grasped a few years ago in Of God and man, to understand how many people love venting by launching anathemas, refusing dialogue and reflection and time by time seek in their interlocutors their enemy to demonize, to affar the absolute sovereignty of their own Self.

But the most serious expression of this hate and enemy culture is represented by a new kind of extreme evil that is empoisoning the relations between people: it is terrorism that legitimizes itself in the name of Islam with an apocalyptic vision of history to put to the pillory all infidels – from non believers to Jews to Christians or Muslims accused of letting themselves be contaminated by openness to the world. This new form of terrorism, which massacres people picked by chance and incites its followers to practice “tiny genocide cases” that can become greater and greater, can be defeated only if two conditions are fulfilled.

A cultural movement of Righteous people in the Arab and Muslim world that becomes a moral reference point in those societies, as shown by the lofty example of Tunisian Hamadi ben Abdesslem, who did not only rescue dozens Italians at the Bardo Museum during the ISIS attack, but has also endeavored to become an educator to dialogue with the others, in a country from which most foreign fighters who have left for Europe and Syria have come.

But above all a plural movement of Jews, Catholics, Muslims with no distinction, reaffirming the value of the loftiest commandment of our civil coexistence: Thou shalt not kill. Unfortunately this unity from Jerusalem to Paris and Istanbul is difficult to create, because too many people think that terrorists could perhaps choose “good” targets.

This is the most difficult test for the Righteous of our time. 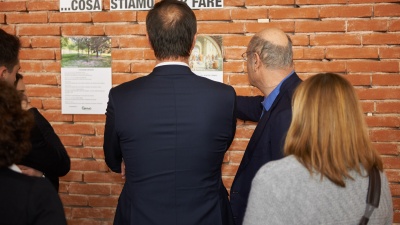 The first 15 years of Gariwo