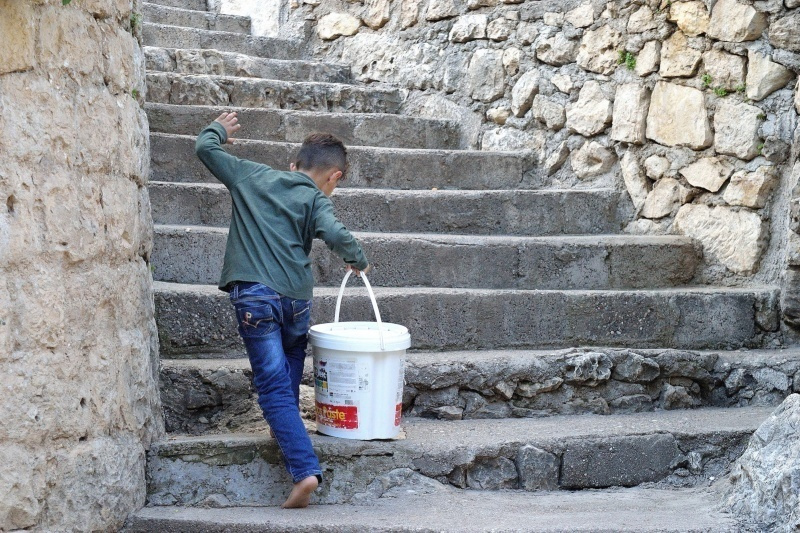 This text resumes the talk given on April 22 at the event "Prevention of Genocide. Combating Religious Persecution. Protecting Religious Rights", organized by the Embassy of the Republic of Armenia to the Holy See and to Italy, and by the platform Stand Together.

In order to talk about a topic as important as the prevention of genocide, I would like to start from my work as a journalist, but also from the 20-year experience of the foundation Gariwo, with which I collaborate. I spent the last years working mainly on the Armenian issue and on the Yazidi genocide, spending more than six years between the Middle East and the Caucasus, before moving to Germany.

In Karabakh a terrible war has just ended (with a new ceasefire, let's not forget, and not with a peace agreement), costing the lives of thousands of people, often very young. Tens of thousands of Armenians have lost everything in a matter of days, sometimes hours: their homes, their jobs, but often also the tombs of their fathers and mothers, who ended up on the other side of the new frontier. As denounced by several international organizations, from Genocide Watch to the International Association of Genocide Scholars, there was a risk of genocide in Karabakh, fortunately partly avoided, at least for the moment.

In 2014, against the Yazidis – as officially recognized by several countries, and also by a detailed report of the United Nations – we had the first genocide of the new millennium, which threatened to erase forever the very existence and culture of this minority. An issue, this one too, far from being resolved, since discrimination and violence against Yazidis continue. This in the context of an Iraq and a Middle East, as I had the opportunity to see, where the ancient Jewish and Christian minorities are in danger of disappearing.

In all of this, one of the most moving things, during the Karabakh war, was the solidarity with Armenians by the Jewish and Yazidi communities. Figures like Nadia Murad and Mirza Dinnayi, whom I thank personally for his commitment, were immediately active in denouncing what was happening. From Italy to Russia to the United States, several Jewish communities have expressed their solidarity, writing appeals and supporting Armenians in crisis. Even in Israel, despite the supply of armaments to Azerbaijan, many intellectuals (and not only) have mobilized. This means only one thing: Raphael Lemkin's intuition was right. Many Jews and Yazidis saw, in the terrible images of the war and in the desperate exodus of thousands of civilians, something that spoke to their hearts: the risk of a new genocide, an ethnic cleansing taking place before our eyes, more than a hundred years after the Metz Yeghern.

To these terrible events, we arrived unprepared. Indifference, here in Europe, was a decisive factor. Nothing new under the sun, of course: Hannah Arendt spoke of it for the Shoah, but we should also remember the words that, in 1916 – that is, in the midst of the ongoing genocide – the philosopher Antonio Gramsci dedicated to the suffering of the Armenians: to bring "within the circle of our humanity", he wrote, facts only apparently far from us, is a fundamental challenge. In the case of the Yazidis as in that of the Armenians of Karabakh, there was a lack of knowledge and information, on the part of the media and politics, which prevented us from understanding and intervening in time for what was happening. Yet, the war crimes in Karabakh were not only an attack against the Armenians, a genocide was not carried out only against the Yazidis, but against all humanity.

Genocide, as historian Norman Naimark explains, is a constant in human history, accompanying us from ancient times to our present. Concrete risks of genocide have been denounced, in recent years, for the Uighurs in China, against the Rohingya, as well as for several minorities in the Middle East and Africa. How can we act to identify and prevent this danger, which is very likely to continue in the present and near future?

A first answer lies in the insight and work of Lemkin, a Righteous that should be studied in every school in the world, I believe. Genocide, this word that, before him, did not exist in any language in the world, is not only a juridical and political key addressed to the past. In Lemkin's intentions, it would have served to prevent what happened to the Jews with the Shoah and before to the Armenians from happening again in the future. Erdogan's aggressive reaction to President Biden's announcement of the recognition of the Armenian genocide makes us understand how, even today, his ideas are able to affect and change history.

Another important key, cultural and educational, for the prevention of genocide is the promotion of the figures of the Righteous against all genocides carried out by Gariwo. We have had not only Righteous for the Shoah, but also for the Armenian genocide. Figures such as Hamu Shiru, leader of the Yazidis of Sinjar honored in the Garden of the Righteous in Milan, who saved the lives of many Armenians during the genocide. There is the German writer Armin Wegner, to whom Gabriele Nissim dedicated an important book, capable of opposing first the Armenian genocide, and then the Shoah. Let's not forget how Nadia Murad, Nobel Peace Prize winner, was saved by a young Sunni, Omar Abdel Jabar, and his family: they risked their lives to save a stranger belonging to another faith, who one evening, fleeing from her persecutors, had knocked on their door.

Figures like these, if promoted in their countries of origin through schools and education, or by dedicating monuments, squares and streets to them, would have a powerful potential in creating a culture of peace and reconciliation that, in the Middle East and Turkey (as in many other places in the world) is still absent, helping to limit the risk of new genocides. In addition to these keys, it is essential to put in place other concrete and effective mechanisms that can avert the danger of new atrocities and horrors.

It is important that the media and culture contribute to the dissemination of sensitive issues such as persecution of minorities. But it is also essential that politics have the right cognitive tools and political mechanisms to be informed and act when an emergency arises. The last war in Karabakh lasted 44 days; the Sinjar massacre, which cost the lives of thousands of Yazidis, 12 days: too few, even if we put in the effort, to understand what was happening, if starting from zero.

Concrete political mechanisms are essential, I was saying. In this regard, I consider fundamental the three proposals made by Gabriele Nissim at the Chamber of Deputies of Italy on the occasion of the Day of Remembrance. The first one: To appoint in our Parliament an advisor on genocides to work in collaboration with the Special Advisor on the Prevention of Genocides of the United Nations and the European institutions; to commit also the Foreign Commission of the Italian Parliament to draw up every year a report presenting to the public opinion the dangers of new genocides in the world and the measures to be taken to prevent them; finally, to create also in Italy an autonomous and independent agency on human rights, as proposed by the European Union, which in collaboration with the International Criminal Court would permanently investigate the state of rights in the world and crimes against humanity.

The prevention of genocide is, I believe, one of the most important challenges for our generation. The path indicated by the Righteous and by Raphael Lemkin represents a fundamental starting point to get out of this prehistory of barbarism in which some men, from the dawn of time until today, aim not only to kill, but also to erase entire peoples and cultures. This is a universal challenge, which must involve us all regardless of national or political affiliation, because a genocide – this must become a moral imperative – does not concern only the people who suffer it, but the whole of humanity.