The racist laws on the dock 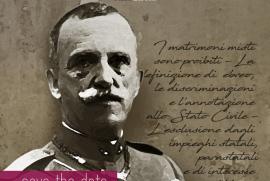 When, last spring, we started to imagine our institutional event for Holocaust Memorial Day 2018, UCEI President Noemi di Segni proposed, instead of the concerts we have organised at the Auditorium for 4 years, a Trial to the racist laws, whose 80th anniversary recurs this year.

Our motivation is not only linked to this recurrence. Italy has never done any soul searching about what has been a true abomination from the legal and moral point of view. No public trials for accounts of war crimes have been celebrated. And after 1946, a hasty attempt was made to turn over a new leaf, because racist laws had involved not only those who had drafted, proposed and signed them, not only the academicians who fretted to find out a “scientific” definition of race, preparing tables and drawings on the purity of blood; not only the Vatican either, which, whereas it protested, it did so not against the discrimination of Jews, but against the idea that the persecution was pursued for racial and not religious reasons. The laws “for the defence of the race” have involved the whole population, turning the Italians into informants and accomplices of iniquity, and corrupting the country's ethical conscience.

One of the first people I consulted, Paolo Mieli, let me notice that no article against, no criticism was published in the press, not even that of the opposition or the underground one!

Nonetheless Jews were Italian citizens. In fact, they were one of the most ancient communities in the peninsula, who had arrived even before Titus' mass deportation that had followed the destruction of the Second Temple in 70 a.C.

They had known times of prosperity – above all at the time of the Communes and the Signorie – and they had gone through times of persecution because of the anti-judaism of the Catholic Church. It was precisely that kind of religiously motivated anti-Judaism  (that saw Jews as a “deicide people”) to create a fertile ground for the kind of biologically motivated anti-Semitic prejudice supported by fascism and Nazism. Starting from 1555, following the bull by Pope Paulus IV Cum nimis absurdum, Jews had been obliged all over Italy to reside in the ghettoes, from which they would be freed by Napoleon, until the Albertine Statute of 1848 granted them Italian citizenship and the full rights that derived from it. A member of the Savoy family made Jews free and equal, another one pushed them back into discrimination.

Italian Jews were proud about their Italian citizenship. They had fought and deserved honors during World War I. 24 much-decorated generals were ousted because of the racial laws: they included Riccardo Padovani, who though had attended the Nunziatella military training with the King.

Many Jews had distinguished themselves in the civil and public life, as well. The famous Mayor of Rome Ernesto Nathan was Jewish, as was Luigi Luzzatti, Prime Minister from 1910 to 1911. Many Jews had joined fascism with conviction. There was even a Jewish Podesta in Ferrara, Renzo Ravenna: he was forced to resign in 1938.

Italian Judaism would give the field of Science the three Nobel laureates Emilio Segrè, Salvatore Luria, Rita Levi Montalcini (all emigrated to America for the racial laws, and all pupils of Giuseppe Levi, he, too, purged in 1938). Many other scientists were silenced and shoved into misery, excluded by the very institutes they had created, such as mathematician and physicist Tullio Levi Civita, who was even denied by its new director entry into the library of his Institute of Mathematics of the University of Rome.

Jewish personalities included distinguished writers such as Italo Svevo, Giorgio Bassani, Carlo Levi and the great poet Umberto Saba. The publication and circulation of their works was prohibited by the racial laws, as the execution of music composed by Jews. Such musicians included Aldo Finzi and Marco Castelnuovo Tedesco, forced to find shelter in America. Our Trial will open with the absolute world premiere of a “Ballade” by him, played by violinist Francesca Dego, who is deemed to be one of the most promising virtuosos on earth.

The world-famous school of Via Panisperna, diamond point of Italian science, was destroyed by the racist laws: Jewish was the wife to Enrico Fermi, and with him also many other scientists had to abandon research and flee abroad, including Bruno Pontecorvo, Leo Pincherle, Ugo Fano, Eugenio Fubini, Sergio De Benedetti, depriving Italy of the fruit of their Physics research. That was a true forced brain drain imposed by the Italian state, which lost the contribution of such important figures as economist Franco Modigliani and the mathematicians and physicists Vito Volterra and Federigo Enriques. Only a few of them were reintegrated at war’s end; many chose to remain abroad, feeling betrayed by their country.

“Racial laws”, as the racist laws were called by fascism, are widely deemed to be a very lenient decree. Nothing more wrong. Of course, if they are compared with Hitler’s “final solution”, they do did not provide physical torture, imprisonment or death – even though they did provide the ideological and bureaucratic base on which it was possible after 1943 to deport Jew in the non-freed part of Italy. And the goal of our trial is precisely that of explaining in a theatrical form, and thus with modalities and a language suited for the non specialistic audience, what these laws really were about. They deprived Jews of all rights, turning them into shadows banned from schools, workplaces, property (even owning a radio was prohibited), professions, public beaches and pubs, and marriage with non Jewish people. A callous series of prohibitions, some of which absolutely ridiculous, such as the one of keeping homing pigeons! Racist laws were an infamity that was applied with a surprising quickness and a callous interest. Professors were purged in mass two days after the publication of the laws into the Gazzetta Ufficiale (the official Law Bulletin) and by very few months Jews became invisible. And yet meticolously filed: all certificates and registers immediately reported the mark “Belonging to the Jewish race”. The non compliance-fee amounted then to the remarkable value of three thousand liras (at the time, a song read out as: “If I could have thousand lire a month…”)

Our Trial, curated for the legal part by Elisa Greco, author of the format on the Trials to history, and which avails itself of the cowork of a significant group of historians and the sponsorship of the highest ranks of the Italian bench, will be twofold. On the one hand, a true trial, whose defendant is the King, but whose goal is to retrace all responsibilities –Mussolini, the Parliament, the Tribunal of the Race, the scientists authors of the Manifesto of race, the complicit or informant citizenship. On the other hand we will stage a very emotional show, with an actor, Marco Baliani, and music, video footage and many witnesses to tell about the suffering.

Our Trial does not close with the verdict. This because we would also like to talk about what happened (or rather did not happen) afterwards. The editor of Italian newspaper La Stampa Maurizio Molinari will highlight how prominent figures in the drafting and application of the laws, which we now define as racist, would keep their high posts. The most blatant case is that of Gaetano Azzariti, who supported the Manifesto della Razza, and was appointed president of the infamous Tribunal of Race and after the war not only was not convicted, but he collaborated with Palmiro Togliatti at the Ministry of Pardon and Justice, he was even the appointed member of the Supreme court and from 1955 to the day of his death – on 5 January 1961 – he was the President of the Supreme court, which in Italy presides over the compliance of laws with the Constitution! His bust stood out until a few years ago in the noble corridor of the Supreme Court, which rejected the demand by judge Paolo Maria Napolitano to remove it. Then, by an opportunistic device that did not tarnish the “sacrality” of the character, the bust was removed “to be restored” and never reappeared.

And what about the Vatican, which after the war opposed the complete abolition of the racist laws? Vatican Secretary of State, Luigi Maglione, who was closed to the Pope, urged the Allies to eliminate only the norms that discriminated the Jewish converts to Christendom keeping the rest of the racist laws, after rejecting a demand from the Jews who urged the abolition of the laws as a whole.

The teachers who had occupied the chairs of the professors ousted by the regime, the musicians who had lose their places in the orchestras, the journalists who had replaced them, those who had occupied their homes, had seized their factories, had marginalized and reported them, were very shy at atone. And the demands for refunding and reintegration moved forward with an exasperating sluggishness and did not take into account the damage incurred for the forced absence from work and social life.

I wish to conclude by a small exemplary tale. Musician Kurt Sonnenfeld, who had been interned from 1940 to 1945 in the concentration camp of Ferramonti in Calabria, applied to the Milan Conservatory as soon as it was reopened in the aftermath of war. He was rejected because he trespassed the age limits. The fact that he had spent 5 years in imprisonment for racial grounds was not considered as a valid reason to make an exception.

** «If the whole anti-Semitic legislation was immoral and anti-juridic, this law was certainly even more so; it in fact was not based other than the most absolute arbitrary act…...». Moreover, in those «tragic and grotesque years», the «Court» run by Azzariti, who for over a decade had been the strong man of the Justice Ministry (and the racial laws could not have been written by an elementary teacher such a Mussolini), ended up with becoming «sources of immorality, corruption, favoritism and speculation. And this while the force of law and the countless norms connected to it hit more and more heavily those Jews who did not want to or could not bow to arrogance and blackmail ». These are words by historian Renzo De Felice.