​The plight of Yazidi women 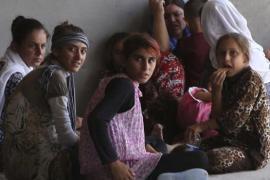 I come from Irak, a country with a millenary history and a glorious past. Our ancestors created very good laws that have lived on for over 4,000 years. This land witnessed the creation of the first alphabet, and taught the Humanity to read and write. I am coming here from Kurdistan, a happy and diversified land where all ethnicities of the Iraki people live together, without any discriminations. It is to my great sorrow that this land has bleeded for many years, in an unprecedented way. A war is going on against an evil enemy, who wants to reverse time, while many others with to lead a modern and civil life. Under the din of the bombs and the fear of bullets, there are millions Irakis, who live life in terror. Without any doubt, you know about Irak as a melting pot of faiths, nationalities and ethnic groups, but unfortunately you also know about what happened to the Yazidi community and the gross crimes they have been subject to: they have been abducted and killed by the Daesh criminal group. On 3 August 2014, Daesh attacked and destroyed Sinjar and the neighbouring village, obliged thousands prisoners to change faith, under the threat otherwise they would be killed. Thousands women and girls were kidnapped, sold and enslaved. It is as if we had gone back many centuries. Daesh brainwasshes thousands Yezidi kids, whom it holds prisoners, to turn them into terrorists and kamikazes. it is the extermination of a community that has lived in Irak for millennia.

By telling you about this, I don’t mean to diminish the extent of what happened to the other communities: Christians were chased away from their homes, thousands shiites were killed in Tal Afar, the Abu Namr tribe was slaughtered and many more crimes were committed. The most heinous of them, however, is the kidnapping of the Yezidi women, in a world, which does merely look as modern. There are thousands women abducted and tortured by these thugs, 3.600 are the women and childen who have been kidnapped, not to mention those who were killed or sold. Still today, in the 21st century, our women are bought and sold, despite the existing international treaties that prohibit slavery and human trafficking and defend the rights of women and human beings in general, and many more international groups are demanding the great powers to step in.

I have been asking the international community to help us, save our prisoners and let them go back to their homes. It is not easy to accept to lose one’s dear ones and be defenceless. Irak is fighting against Daesh and has managed to free many areas that were in their hands, but the liberated cities are destroyed, like Sinjar, which was razed to the ground by over 90%. We need aid to rebuild it, we need humanitarian aid for thousands refugees, who were compelled to leave their homes. There are, in fact, over 3 millions refugees in Irak, out of which 180,000 in Kurdistan and 460,000 yezidis. 85% of the Iraki yezidis are now refugees, and have lost all the had: land, homes and children. They really need humanitarian aid. They live in tents, no proper accommodation for any human beings, inside the refugees camps, and hundreds children are orphans.

In the face of these problems we must reflect on the future of Humanity and, in particular, of minorities.

International recognition for what happened to the yazidis is important to us, to grant them international protection and prevent it from happening again. Thanks to Kurdistan and the volunteers we have managed to rescue nearly 6800 women and children from the grip of terrorism.

Thank you, thank you so much for choosing me for honour inside the Garden of the Righteous of Milan. To me it is a great pride and an expression of esteem whose impact on my I can hardly describe. It’s an honour to me to receive this merit and I am really happy. This is a way to honour all the activists who defend human rights, and all women who have suffered in Iraq, remembering those who have been abducted, the mothers of the martyrs, and the orphaned children, regardless of gender, ethnicity and faith.

I speak up for all the human beings who are persecuted all over the world. We have the duty to defend them, protect them, rescue them from persecution. It’s the duty of the international community to grant every woman her own rights. In Iraq, now, we must work hard in order to re-establish citizen trust and spread a spirit of forgiveness and acceptance of the other. We must bring to justice all those who have perpetrated gross crimes and convict the accomplices in the abductions of women and children.

Although there are many conflicts that divide human beings from each other, we belong to the same Humanity and share the same fate.

Analysis by Vian Dakhil, Yazidi member of the Iraki Parliament