THE MEMORY OF GOOD UNIFIES REMEMBRANCE CULTURES IN EUROPE 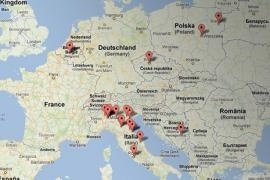 The celebrations of EU Day of the Righteous are yielding a surprising result: for the first time memories are shared. From Milan to Prague, Warsaw, Brussels and Sarajevo we will remember the people who taken up personal responsibility to counter genocide cases and totalitarianism. Uptil now it has been impossible to have one single day for the Armenians to remember the Holocaust together with the tragedy that hit their people, for the Jews to remember the victims of other massacres in Rwanda or Cambodia with the ones of history’s cruelest massacre, for Eastern European countries to reflect on the fate of the Jews under Nazi rule at the same time as they remember the persecuted by communism, after so many years in which all this had become repressed history.


This sharing blockage was not unfounded. It was due to very serious reasons instead. The Jewish world, Yad Vashem to the fore, was right to fear comparisons that could water down the world’s responsibility for the extermination of Jews. It took years before the Holocaust discourse became a heritage of the whole European Community and only the past few years in France, Poland, Hungary and the Ukraine witnessed the start of a debate about the complicity of these countries and their populations with Nazi extermination policies. On the other hand the Armenians thought that dealing with the genocide cases hitting other peoples was not so important, given that their own tragedy was still a repressed memory and Turkey used to threat all those who dared take interest in it. And nowadays the organizations struggling to preserve the memory of the gulag in Russia, such as Memorial and Recovered Names, are facing great difficulties due to Putin’s nationalist wind. The Russian dictator has managed to create a smoke curtain hiding the totalitarian past in the name of the nation’s purity.


Hence, for many years the fact that no one took up responsibility for genocide cases not only prevented a fruitful dialogue between the holders of different memories, but also slowed the process in which they would consider recognizing themselves as involved in a common destiny with the others, although within different contexts. Everyone thought exclusively of his/her own history and thus in Europe we have often witnessed a kind of a competition about the value of the respective memories, as if one had to shortlist suffering and some victims mattered more than others.


The result is therefore that a young person living in Prague, Warsaw or Bucarest does not have the same perception of the past of an Italian, English or French youth, whereas a shared memory should unite all European citizens. In Budapest one reached the paradoxical situation in which to remember the victims of communism one concealed the responsibilities of those who, like Admiral Horthy, were responsible for the anti-Semite laws. By bringing out the memory of the Righteous, as stated in the Written Declaration approved by the European parliament on 10 May 2012, some fences which seemed hard to overcome eventually have started falling.


The reason why this metamophosis has begun is essentially ethical. The exhortation to take up one's personal responsibility, embodied by all people who despite their lack of perfection have struggled to assess the dignity of the others, allows us to arouse an unexpected feeling of empathy. The Righteous person is in facts the one who has been able to put him/herself in the other’s shoes and deploy his/own little force to stem evil.


Those who have risked their lives for the others have made a somehow similar experience in the Holocaust, in Rwanda or in the Armenian genocide. When we acknowledge this common pattern in the human behaviour of those who had the courage to take up their own responsibilities it becomes easier to understand the utmost importance of undertaking a common and shared path of all memories of evil, despite all the differences existing between the various kinds of totalitarianism. It is in facts the universalization of the Holocaust, as well as the other genocide cases, to make their memory stronger without strengthening clashes. Under all these circumstances human beings have been called to choose based on the sacred value of life and unfortunately only few of them have been able to do so.


Face this contradiction that, as pointed out by Jan Karski, has led to the moral decay of entire societies, it becomes important to reflect on the tales of the Righteous people.
They teach Europeans that our challenge is the same in every era: every person always has the opportunity to save the world in his/her small way without expecting others to do that for him/her. Emanuel Lévinas, as remembered by philosopher Bernard Casper who could discuss his experience with him during their imprisonment in Stalag 1492,  a camp for war prisoners near Hannover, had confided him that the only thing which had enabled him to resist senseless and unexplainable violence was that inner voice that told him: “You, nonetheless, shall love. Do not kill and don’t leave the other in his mortal condition.”This is the secret of the Righteous: the responsibility as last bulwark of human dignity even when the humanity has lost its direction and every moral reference point.