"The heart has talked" 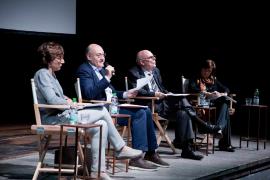 Today as in the past, the Righteous are those who break the chains of evil, who save a live, who bring testimony that the evil in the world is not absolute. They are those who demonstrate that there is no such powerful evil force, so total, solid which has no cracks that could be penetrated, to put a seed, to smantle that solid mass. It is for that, personally, I do not love total views of technique since they are idealizing and not able to capture the real in his nature with its contraddictions and imperfections.The act of the Righteous is an imperfection in the crust of evil.

Today as yesterday the Righteous are those who let the heart talk, and not calculations. As motto of my latest book,co-wrote together with Maurizio Ciampa (La vita non è il male) , we have chosen a sentence pronounced by a young during the Charlie Hebdo attacks in Paris; a young from Mali, Lassana Bathily, who worked as waiter in the Hypercacher in the jewish neighborhood of “Porte de Vincennes”. There, a terrorist entered violently –he had already killed a policewoman and three ostages- who began to markly threatened other hostages. Meanwhile, Lassana was in the cellar with more fifteen people. What has he done? He did not care only about his own life. He cared about the others. He opened the big refrigeretor, he swithched off the tension and kept the guests quite. “My hearts has spoken” he is going to say some hours later when he was asked “How it comes that you, a Muslim…” “ it is not all about being Jewish, Muslim or Christians, we all have to help each other to come out of this crisis. So here it is the meaning of Righteous, let the heart talk, so we can escape the crisis of humanity. Simirarly, many Righteous across history had let their heart talk, in order to safe lives, manytimes risking they own lives. So today it is not possible to count those who help the hungry or the homeless, to the stranger and risks to sink in the sea (or despair, which is the same), to whom is sick and need care, to whom is dying, to whom is a child and needs to be helped to grow. Are they saving lives? Maybe. Sometimes. They are always saving something.

Are we jeopardazing the meaning of the word Righteous giving to it a broader sense and making it a general attribute of a “good heart” or a “gentle spirit”? A sort of manifest of the boy-scouts? May be.

To give justice. You have started with these roundtables about the crisis of Europe.It is important to talk about it, because if it is true that everything is always the same as yesterday (wars, injustices, poverty), it is also true that our times have their specific dramas, an acceleration of emergencies which needs to be studied more in deep.

This time is highly incomprehensible, since we have many events, situations, pilots, un-parallel historic dimensions, difficult syncro; “The world is to complicated to be kept in order… the world is in revolt, and there is not vision, theory, algorithm capable to solve the variables… the thought sways even before the actions” (Zagrebelsky). To this disorder, to this chaos participates also the language. There is a new Babel of meanings.

Since the semantics relies on the notion of justice, we should think of Righteous and justice as interconnections, so we may multiply 36 per n times.

“Justice” as freedom, truth and justice, is a suffering word. As far we understand once truth is not more reacheble , justice is not achievable and may degenerates in slavery. We have changed our vision about these words. Truth is not understandable but is achievable. Germaine Tillion, the famous ethnology scholar interned at Ravensbrück, student of Marcel Mauss and Louis Massignon, head of the resistance movement of the Musée del’ homme wrote: what is good and bad is very simple: the very action oh human being should be that of protect and save the next one. This the the obbligation towards humanity in the words of Simone Weil.

It is important then, to think how to side jointly with the juridical term “justice” the adjective “creature”.This two worlds have always been in the realm of the religion.

The orphan, the widow, the stranger, they have no one who defends them, they are all alone in their sorrow.

It is called “mercy”, this approaching to the suffering one, and mercy is not justice. The one in is not required to be irreprehensible to be helped. No. To him we may land justice. It is necessary to cure him, so for the helping one there is no fault neither. No one is asked tobe a saint, good or faultless. What he does is good enough.

The Good Samaritan is not asked his degree of purity; it is sufficient his act. So in Matthew 25 there are no questioning about the nature of the people in need. No. It is sufficient that that act saves a life, and saving a life it meanssaving the world.

Today. What we can do today? How to lisen to righteous? How to bring to an effective education to justice?

From one side we have the heart pulse, but we cannot meddle with that. From the other side there could be done a lot of work to spread a culture of “creature justice”: remember the places of memory and its legacies, and made a linchpin of it. We should try. We should resist to the checks, we should resist to the defeats. We are living now in a planetar emergency; ( “the world is out of numbers and lives” admitted Baudelaire,and nowadays more then ever…).we have to admit that we are living in a dimension of normality compared to previous historical times, sowe have to protect this “normality”, so to reach the possibility of a ”creature” justice.

To say, to show, to denounce. To do “critical” memory, not formal. To illustrate, to show evidence. To resort to knowledge: the historical one, of tradition, the religious one too, as long as it does not convert into a cage, but it is a linchpin of thought, of relation, wisdom, exploration of words.

There is a “normality” of justice which is needed to be followed, so it is of utmost importance the work in schools, houses and cities.

When Borges illustrates, in his poem about the Righteous, situations of absolute normality but prcious, he illustrates situations against the apathy of live. Maybe there are not to be created Righteous, but surely we contribute to a soil where justice could flourish. The simple and beautiful things of life are, at the very end,the basic needs of everyhuman being.

A man who, as Voltaire wished, cultivates his garden.
He who is grateful that music exists on earth.
He who discovers an etymology with pleasure.
Two workers in a Southern café, enjoying a silent game of chess.
The potter pondering on a colour and a shape.
A typographer who sets accurately this page, which he may dislike.
A woman and a man reading the final tercets of a certain canto.
He who is stroking a sleeping animal.
He who justifies, or seeks to justify, an injustice done to him.
He who is grateful for Stevenson’s existence.
He who prefers the others to be right.
These people, unaware of each other, are saving the world.