The grounds of dialogue between Jews and Muslims 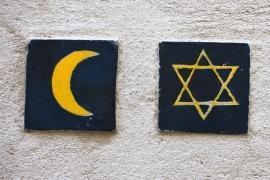 Following we publish the remarks by Gabriele Nissim at the conference “Anti-Semitism and Islamophobia: two sides of the same coin”, held in Milan on 4 July 2017.

Let us face the truth, let us be honest to each other. It is very rare to see Jews and Muslim discuss anti-Semitism and Islamophobia together. This can happen only somewhere In Europe, because in the whole Middle-Eastern context prejudice prevails.

In too many Arab countries, Jews are seen with suspicion and the adjective “Zionist”, which is tied to the word “Jew”, has a derogatory connotation. Moreover, the conflict between Israelis and Palestinians makes such dialogue even more difficult.

We of Gariwo have also been met with many difficulties and great hostility (sometimes unconfessable), when we decided to honour some Muslims at the Garden of the Righteous of Milan, such as archaeologist Khaled el Assad – the keeper of Palmyra slaughtered by the Isis -, Halima Bashir – an extraordinary woman persecuted for her opposition to rape in Darfur -, Samir Kassir – the Lebanese journalist murdered in an assault in Beirut. The presence of the Jewish Community at the ceremonies has conditioned the participation of the representatives of these exemplary figures.

The dialogue between Jews and Muslims is heavily conditioned by many external factors. We cannot afford to ignore them because, as Primo Levi wrote, there exist no distinct islands in the world and we run the risk of bearing serious consequences.

Europe, for how despised and mistreated, has nonetheless a great pro: it offers a context of democracy and freedom, which enables Jews and Muslims to find the strength to overcome prejudice and positively influence dialogue within the very Middle-Eastern world. Such a context can become the driving force of a cultural modernization in the Muslim world and a provide new grounds for the dialogue between Jews and Muslims. This is the great mission of Europe in the world, because our traditions, our really troubled history, with the hardship we have endured, have enabled us to create a model of democracy able to enhance pluralism and successfully handle the conflicts and the difficult relationship between State and religion.

However, we need clarity within each of the two communities about the true meaning of Islamophobia and anti-Semitism. Both within the Jewish world and the Muslim one, some soul-searching is necessary to overcome reciprocal phobias and prejudice. Everyone must try to understand the other and not think that wrongs exist only on one side. This is why it is important to talk to each other without fear and accept with tranquility the possibility of disagreement. A lot of patience is necessary, along with goodwill and unconditional openness to confrontation.

But what does “islamophobia” mean today?

Since prejudice against Muslims is not only linked to religion but it is deeper, of a racist type, we need to define it better.

Islamophobia means denying Muslims above all the right to live their own faith, as Christians and Jews normally do. Do we witness to mistrust as regards the building of mosques, but where should Muslims pray? In the streets and on the squares? Religion gathers people’s quest for meaning and this is a sacrosanct right. The believers of all faiths have in common their relationship with God, which for a praying person is more important than any precept, place or ritual.

Secondly, “islamophobia” expresses the fear, often fed by the populists and prophets of doom, that the Western world is dominated by the “Sharia law” and submitted to a fundamentalist culture. Many people are afraid of a downturn of our democratic values and the allegation that Muslims would like to transform Europe in a new caliphate. We would thus be condemned to a kind of “submission”, as reads out the title of the bestseller of by Houellebecq, the French writer who counts among his fans US Presiedent Trump, who in turn accuses Europe of letting itself be conquered by the Muslims without opposing any resistance. The biggest nightmare is terrorism. Every Muslim who arrives in our country is seen as a potential jihadist.

I must tell the truth – and as a Jews I must confirm this – that today in Europe it is more difficult and problematic to be a Muslim than to be a Jew. If you have a beard and an Arab accent, when you take seat on the plane people will suspiciously stare at you. If you look for a job you will often have the feeling that between an Italian and a Muslim the choice will not be made only on the grounds of merit. It is the same sensation that a Jew has when visiting an Arab country. My name is Nissim – a name which is very recognizable in the Muslim world – and everytime I experience a feeling of anxiety. I have recently been to Oman and the first thing the guide asked me was the origin of my name. He did not ask me openly: “Are you Jewish perhaps?” but I immediately perceived his surprise.

What is anti-Semitism today instead?

It does not suffice to remember its historical origine, because this phenomenon too, like any kind of racism, changes over time. As I said before, today anti-Semitism, to different degrees, crosses te whole Muslim and Arab world. This is a key novelty of our times. Of course, not all countries are the same: for example in Morocco, Tunisia, and Jordan you fortunately feel a different atmosphere, but surely anti-Jewish prejudice (not to mention true hatred) are very strong in Iran, Saudi Arabia, Egypt. It is nearly completely “normal” not to shake hands with an Israeli athlete and it is very unlikely for an artist or intellectual of Jewish descent to be invited in those countries.

Wahabist fundamentalism, the ideological propaganda of Iran and the Hezbollah have set on huge waves of anti-Semitism. It is not by chance that the Isis terrorists consider Jews as the worst enemies of the humanity. The economic crisis instead, has brought into the spotlight again old phantoms of the past. Often, according to such ideology, people think Jews are linked to the banks and the strong powers who would get the burden of the economic crisis to weigh on the shoulders of the poorer. This is an old litany that always resurfaces, also covertly, with ambiguous words. Many populist forces speak about a super national power that would imperil the sovereignty of peoples.

And who is behind such powers, if not cosmopolitan Jews?

With the resurfacing of ethnocentricity in Eastern Europe – as recalled Hungarian Agnes Heller – Jews are seen as the super National enemy that paves the way to the invasion of migrants and the negative contamination of national identities. In the end they are accused of wanting a Europe that suffocates its nations. It is nearly a paradox: in Poland and Hungary they would be guilty for the “suffocating” identity of Europe.

But the greatest guilt that weighs on Jews is their solidarity with Israel. Nobody disputes the Armenians their right to feel sympathetic with Armenians, or the Chinese communities’ right to love China. Instead, Jews are always asked to condemn Israel, not for a negative judgement over its government, but in order to deny the legitimate right of this country to its very existence. Today we discuss a lot about Trump, but nobody ever thinks of considering the United States as an unlawful state for the discriminations perpetrated against the “red skins” or the African Americans. In the history of the humanity there are no completely innocent states, as states are made by men. Creating guilty states means sowing hatred and opening the way to dangerous prejudice.

This is a key point to debate in the Muslim communities, which should accept the sympathetic attitude that Jews nurture towards Israel on the basis of the same principle that makes them aware of the Palestinian condition: a reciprocal understanding that could pave the way to a conciliation between the two peoples and the two faiths.

And in Italy, on what should Jews and Muslim base their dialogue, for a better mutual understanding? It does not suffice to discuss ideas. The best way to better understand the other is to commit to doing “good deeds” together.

Zygmunt Bauman in his book Of God and Man talks about a fusion of horizons that is accomplished through shared practice. To understand each other, learn one from the other and change one’s mind, it is important to face the challenges of the world together.

We have written it in the Charter of Responsibilities 2017: the struggle against terrorism, the commitment to hospitality against the national selfishness that is crossing Europe, and the rejection of the hatred that has invaded politics, should see us all united for a plural world. We understand each other better, when we are aware we must face the same destiny.