​The example set by Khaled 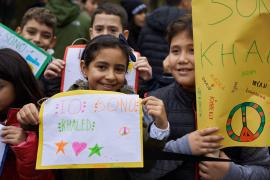 Why are we remembering Khaled al-Asaad, the archaeologist who decided to remain alone to protect Palmyra, precisely now, five days after the Paris massacres?

Do not let us forget that Palmyra is one of the chief archaeological sites of our civilisation, a symbol of human plurality, the encounter between East and West, where the most important trade flows took place between Rome, Persia and the Mesopotamic area and where men and religions melted, without any culture to prevail on the others.

Losing Palmyra would mean waking up one day in Rome and not seing the Imperial Forums anymore.

So why remember Khaled?

For the courage that empowers us

There are gestures of brave people who leave marks in our imagination and let us gain new viewpoints and worldviews, as great French scholar of ancient history Pierre Hadot suggested.

These deeds in fact, despite often not changing the world and beeing doomed to defeat, are what makes us feel for the Good of Humanity and give us the strength to change.

Let us think of the naivete of Armin Wegner, who in 1933 wrote a letter to Hitler to try and persuade Hitler to suspend the persecution of Jews; of the spirit of sacrifice of Jan Palach, who set himself afire in Saint Wenceslas square to convince the people in Prague to resist Soviet totalitarianism; of the madness of the still unknown boy who tried to stop the tanks in Tienanmen Square alone, when the Chinese government decided to put an end to the students’ dreams; of the suicide of Salvador Allende who, faced with Pinochet’s military coup, did not want to surrender inside the Moneda palace and preferred succumbing under the bombings, for the sake of defending democracy.

Wy do we have to understand why he did it?

They told us that his friends had suggested him to go back to Damascus and he could have saved his life.

He must have been really naive to hope he could convince the new conquerors to spare the archaeological site or hide some precious relics from the eyes of those criminals.

But it is precisely the senselessness and naiveté that prompts men to be brave, as noticed by Armin Wegner. The reason is very simple. One performs certain deeds because he or she does not want to relinquish his or her own trust in the humanity. ISIS killed Khaled, but not our confidence in beauty and humanity.

I want to tell everybody that terrorists cannot win, because they cannot take the taste for humanity away from us. Terrorists would win if we let ourselves be carried away by our hatred towards the others, if we behaved like them and lost hope in the humanity and the wealth of difference among umans.

I want to remember the words of Antoine Leris’, the journalist of France Bleu who after the death of his wife Helene, murdered at Bataclan’s, wrote on Facebook: “You have killed my wife, but you will not have my hatred, as I want to keep loving life and music. I do not want my son to grow up in hatred, fear, and resentment”. This are the same words of Hetty Hillesum’s.

Why do we have to remember Khaled after the Paris attacks?

In order to remember the brave men who fight the IS in the Arab and Muslim words, and the fact that we can win our fight only with them. Terrorists would like us to split, a clash of cultures and religions to take place, our nations to turn into a new Yugoslavia, a war of everybody against everybody else.

A new kind of Nazism is awaiting us and we must defeat it together, as we all fought together in Second World War.