The Chief of Sindjar, a Righteous for the Armenians 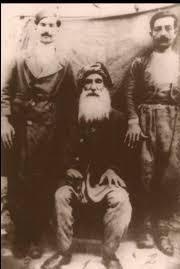 Following we publish an excerpt from the book I disobbedienti (Guerini e Associati) by Pietro Kuciukian, Honorary Consul of Armenia to Italy and co-founder of Gariwo, about the figure of Hammo Shero, the Yezidi chief who sheltered the Armenian refugees during the genocide of 1915-16.

At the beginning of the 20th century, Sindjar belonged to the kaza of Mosul, and it was the only place in the whole Ottoman Empire where the Armenians were accepted and protected. Fierce mountain people, strenuous defenders of their independence, those people inhabited the Sindjar mount, isolated amidst the desert of Mesopotamia. Over a half of its dwellers, nearly 20,000 were yezidis.

Yves Ternon explored in depth the events related to Armenian history in Sindjar and Mardin, and hightlighted the figure of Șero, from the Hammo tribe, the indisputed chief of Sindjar, a Righteous who sheltered the rescapés, thousands Christians, most of whom where Armenians. He gave them housing and fields, he fed them. Many Armenian deserters reached the moutains; the flow of refugeees did never stop. The guides were Arab, Circassians, Chechenyans who earned money, but honored their contracts as well, paying the complicit Turkish policemen and ferrying the deportees to Sindjar. Hammo Șero sheltered the Armenians, giving them land and work. «The Armenians - wrote Ternon – were good handcraftsman, they sent letters to Mardin to get sowing needles, sugar and money, which they exchanged for meal, lentils and barley”. At the breakout of a typhus epidemics, as many Kurdish sheiks sought to get rid of the refugees out of fear of the “Armenian disease” and the contagion, Hammo Șero proposed to isolate part of the villages and quarantine them until their healing. «When famine loomed – wrote Fernon – the Armenians went to the Arab villages of the plain, at the Tai tribe, to get cereals and meal». In 1918, when an Ottoman army corps tried to destroy this rebellious place, Hammo Șero summoned the sheiks, but, without waiting for the response of the Yezidi noblemen, attacked the Ottomans. The Turkish soldiers reached over to Șero's village and set it afire, then they withdrew, while the Armenians managed to flee on the top of the mountain. The Yezidis attacked the Turkish garrison that had remained there and the Ottoman definitively left the mountain chain. Claire Andrieu wrote that “the Yezidi's behavior toward the Armenians stands out from the typical Kurdish conduct of complicity with extermination, just the same way as, during Nazi occupation, some Tatars from Belarus have protected the Jews, albeit they were collaborators for the most part».

The Kurdish chief Hammo Șero was thankful toward the Armenians, as some years earlier, when the sultan wanted to massacre his Yezidis, he had received protection from France and England, Christian powers. He was a «patriarchal figure, with a long white beard […] and he used to pass among the tents of the Armenian refugeees in order to bring them relief and consolation». He had a network of informants who patrolled the surroundings of the mountain massif to learn about the proceeding of was and to rescue the Armenian refugees. When the Turkish kaimakam of Balad asked Hammo Șero to hand over to him some Armenian fugitives, the l’ağa replied that to him it would be a shame to hand over the guests of the mountains, for they, like all guests, are sacred. Rachel Youssoufian, the Armenian survivor of the camp of Ras-ul-Ain, bore witness to her acceptance on mount Sindjar and to the fact that, as she had two children, she was given a house, which was separate from the ones of the other Armenians, nearly 200 people including women, girls and kids. In 1919 there were still 500 Gregorian Armenians, 160 Catholic and 100 Jacobites ones, 100 Syrians, sheltered and hosted on mount Sindjar.

Historian Yves Ternon concludes his remarks for the Revue d’Historie de la Shoah, by these words: «This is the extraordinary tale of Hammo Șero, the chief of Sindjar, a Righteous for the Armenians».

Analysis by Pietro Kuciukian, Honorary Consul of Armenia to Italy and Gariwo co-founder