The ambiguity of Good 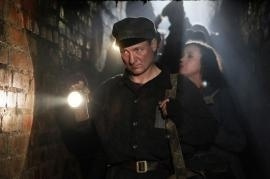 We suggest all Gariwo friends and followers an original way to celebrate 6 March, the European Day of the Righteous, in case somebody cannot take part in any of the many events that will take place in Italy and Europe. We invite you to go to the cinema and watch In Darkness, probably the best movie about a Holocaust Righteous.


Leopold Socha, as the movie’s screenwriter David Shamoon writes in our pages, is probably the character that most clearly defines a moral choice, which paradoxically stems from a long and stressful soul-searching of a man who is not only a thief, but also an anti-Semite as conditioned by the prejudice that envenomed the Polish society.


Socha in facts is a criminal who believes it is absolutely normal to rob the Jews, and feels legitimized to take profit of the tragic fate of some refugees who hide in the sewers, because, like many Poles, he is persuaded that the fate of the Jews is the right punishment for their behaviour. As time goes by, though, this character faces a slow change and feels compassion toward the very Jews he has been pillaging under the continuous threat to report them to the Nazis, as he knows very well about their fate.


From petty criminal he thus becomes their rescuer. He does not only react to the indifference of his wife and friends, but he even feels pity for the Jews forced to experience a terrible competition for life in hiding. He eventually understands the victims’ suffering, independently from his profound beliefs, to the point of feeling happy not for the jewels he receives from them, but for their rescue.


The movie is a metaphor of the human condition, which Hannah Arendt analysed so thoroughly, as she pointed out that the moral costumes are “fashions” that can change overnight. Somebody does harm to somebody else even without realizing it, and like in the specific case of the Jews in Poland, the anti-Semite prejudice is even considered as a virtue. But the same person, conditioned by society, can perform a good deed when listening to the voice of his or her own heart, that miraculously can lead to question even the deepest-rooted beliefs. This movie is therefore an extraordinary message of hope, because in history there is nothing heroic or rethoric, but only the statement of the ambiguity and normality of good.


Everbody can perform Good, even the most inveterate anti-Semites, who at a certain point understand that only by keeping a relation with their conscience they can find their lost moral standards again.


This has happened in all cases of genocide and under all totalitarian systema, to the many people who have had the strength to think and feel compassion for the victim, albeit until the day before they considered it as totally normal to remain indifferent or even take part in the persecutions in the name of a happy society cleansed of its “enemies”. The movie In Darkness is thus a great occasion to discuss, on 6 March, the complex and difficult choices between Good and Evil that have been made by many Righteous, who are as imperfect as everyone of us.