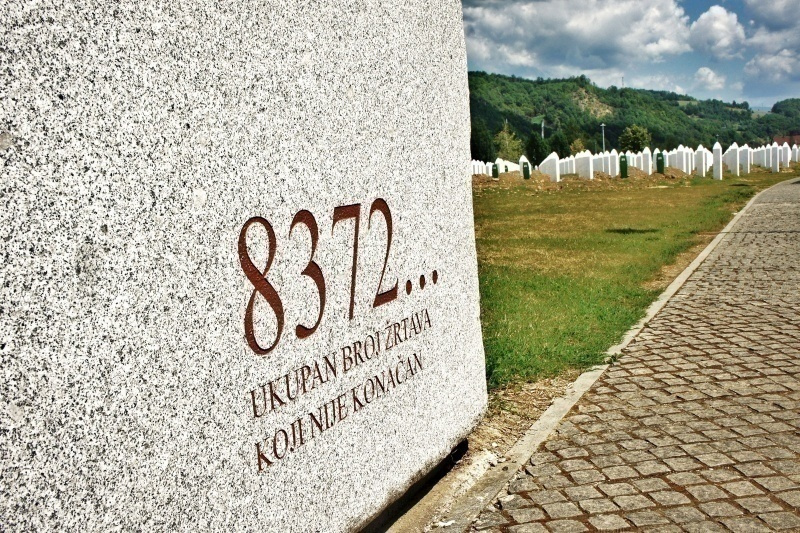 Ado Hasanović was only six years old when he and his parents fled their home to safety. As they were hiding in a forest, they heard a large explosion coming from the opposite direction. The father said: “That’s our car, the explosion came from where I hid it”.

Watching the fire from a distance made Ado very sad: his favourite toy was in the car. For him, a six-year-old boy, it was very hard to bear the pain of losing such an important part of his life, of his childhood.

Hasanović, now a successful filmmaker living in Italy, lost many family members during the siege of Srebrenica. However, he never lost his love for the town where he was born. His first short film, shot in 2007, is titled I am from Srebrenica and deals with his pride and that of the young people of that iconic town.

In that July of 1995, Alden Begić, now an internist physician living in Sarajevo, also lost many family members. More than fifty people, all male. The bodies of many of them have not been found yet.

The same fate befell Hasan Hasanović, who lost everyone, and Jasmin Jusufagić and Alma Mustafić: all born in Srebrenica and survivors of the genocide that took place in their town 27 years ago. In the documentary Revived, released in 2020 on N1 television network (covering Serbia, Croatia and Bosnia and Herzegovina), these people talk about what happened in those few days. The worst massacre in Europe since the end of the Second World War, which none of them could have imagined. When telling their stories, in spite of all the pain they still carry inside, the protagonists of the documentary convey a universal message: hatred is never the solution.

Two years before the genocide, the UN had designated Srebrenica as a “safe area” for civilians fleeing fighting between the Bosnian government and separatist Serb forces. However, between 11th and 19th July 1995, Republika Srpska military forces killed 8,372 Muslim men and boys. A huge crime that is still played down today, especially in Serbia and Republika Srpska. In this regard, last July, before leaving his 12-year-long mandate, the former high representative of the international community in Bosnia, Valentin Inzko, ruled that denial of Srebrenica genocide should be prohibited under Bosnian criminal law; a decision that led high representatives of Republika Srpska - Milorad Dodik and President Željka Cvijanović - to express their stance, namely to deny the genocide once again, thus opening a political crisis and even announcing the independence of Republika Srpska.

At the same time, Serbian President Aleksandar Vučić refrained from expressing public opinions, without denying his own reaction after General Ratko Mladić was sentenced to life imprisonment. Indeed, Vučić had indeed argued that The Hague Tribunal had “sentenced mainly Serbs to a total of 1,138 years of imprisonment, whereas no Croatians or Bosnians had been convicted of crimes committed against Serbs”.

To honour General Mladić, a few days after his life sentence, a mural depicting him appeared in the centre of Belgrade: a war criminal who will always be a hero for extreme right-wing groups. The mural is still there, on the wall of a residential building in Vračar district, one of the most beautiful ones in central Belgrade.

Similarly, the Croatian president, Zoran Milanović, has never condemned that crime and declared in December 2021 that “a genocide was actually committed in Srebrenica, but for more serious crimes - including Shoah – a new term will have to be invented”.

What happened was “intentional”, involving extremely precise and well-defined roles for each individual in the crime chain. Most of those who perpetrated the genocide knew far too well what was going to happen and did nothing to prevent or stop it. However, all perpetrators have not been convicted yet. Some of them have been tried and other trials are still ongoing in both Bosnia and Herzegovina and Serbia. The dissatisfaction of the families of the 8,372 victims, who have been registered so far, is understandable. Indeed one should not forget that this is not the final number.

Why such horror could have happened is a complex issue, as the relevant causes can partly be traced back to contemporary events and partly have roots in past centuries. Serbian citizens usually ignore, reject and deny the genocide in Srebrenica; they often make excuses and say that “they started it first”, but, for the most part, none of this is spoken about, as if it did not happen. Bosnian Muslims call for dialogue, demand admission of responsibility and recognition by the Serbs of the genocide, but it is very hard for them to obtain this and they will have to continue living with this trauma.

Life in Srebrenica after Srebrenica is not easy. In other parts of Bosnia, coexistence of the three ethnic groups continues... perhaps, not quite as before: each side has its own reasons and tragedies.

There are victims and executioners in a conflict. War in former Yugoslavia was not wanted by the different ethnic groups of the country that no longer exists. However, the heaviest toll was paid by citizens, whatever ethnic group they belonged to. New generations must be taught never to repeat the same mistakes, which is something that unfortunately is not done sufficiently.