Rwanda, the Righteous, and Hope for Humanity 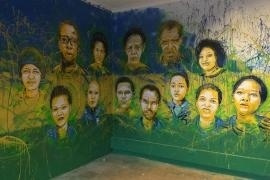 To be a human is to place other humans into categories. Most people treat those we put in our group with kindness and those not in our group with animosity. Far too often, that animosity leads people to inflict the most diabolical acts we can imagine on those considered to be not of our kind. However, some people in those darkest of times choose to behave differently. They treat the persecuted with benevolence. We must learn what leads people to choose light over darkness if we are to avoid repeating the darkest episodes of human existence.

Twenty-six years ago, in the nation of Rwanda, people placed in the category named “Hutu” slaughtered approximately one million humans put in the group called “Tutsi” for committing no other crime than being “Tutsi.” The slaughter only took 100 days. Thousands of other members of the Tutsi category were tortured and raped during the same period, and thousands watched loved ones die. As a teenager, I was wounded during this genocide and saw loved ones murdered. A week after the genocide started, a gang of killers was about to club me to death. I survived because a man threw his body on top of me to absorb the blow.

I recently made my first trip back to Rwanda since I immigrated to the United States shortly after the genocide. The trip was my first opportunity to thank the man who risked his own life to save mine in person. The story of our lives leading up to that noble act provides a clue to avoiding future genocides. In honor of the 26th anniversary of the 1994 Rwandan genocide against the Tutsi, I would like to share with you a small part of that story.

In physical appearance, we represent the extreme stereotypes each of the categories of people, Hutu and Tutsi, had of the other. If the genes we inherited from our ancestors determined who we loved and whom we hated, the man would have delivered the blow instead of blocking it. However, my father taught me that the categories of Hutu and Tutsi were an illusion because all people are the children of God and should treat other people like kin. My father also practiced this philosophy. He was always looking for ways to help people without regard to what category other people said they belonged. When I was a very young child, my father hired a teenage boy to help with the chores around our home. The boy was in desperate need of a job and a place to live. We grew up together knowing that the other was not a blood relative, but thinking of the other as our brother.

Our parents often influence what categories we place people in, and our behavior towards the members of those categories. However, this is not by giving us our genes; it is by teaching us whom to love. This fact gives humanity hope for a future where no one experiences genocide. To honor those who died twenty-six years ago, please learn all you can about those who learned to love when others hated. Then tell others about what you learned.

Analysis by Kizito Kalima, The Peace Center for Forgiveness and Reconciliation of Indianapolis