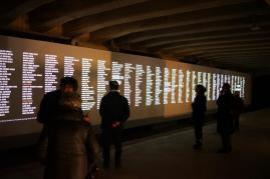 The names of Holocaust victims at Platform 21 Memorial, Milan (Italy)

During Holocaust Remembrance celebrations it has occurred to me to be asked with a certain trace of controversy why I deal with other genocide cases besides the Holocaust and why I think that the category of the Righteous has a universal value. I replied as follows.


A great effort was necessaty to have the Holocaust remembered al lover Europe as an act of moral purification of the countries which knew about Nazi crimes and were indifferent. Therefore I asked myself whether this right, that I have conquered for myself as a Jew, should not apply also to the victims of other genocide cases.

As I was eventually allowed to be heeded in so many initiatives on Holocaust Remembrance Day, it was my duty, while remembering the Holocaust, to speak up also for the victims of forgotten genocide cases, or genocide cases whose memory is repressed by the international community.

All genocide cases must be entitled to remembrance and this due admission does by no means lead to rediscuss the uniqueness of the Holocaust, which, as Yehuda Bauer reminded, is not comparable to any other genocide: the Nazis in fact had planned to murder Jews wherever in the world. The final solution knew no borders. But precisely because the Holocaust was the most universal crime, in that it was not linked to only one territory as happened in other genocide cases, its memory is a lens that shows us in detail all the extreme situations where men planned to kill other human beings.

Secondly, the Righteous are the most apparent expression of human free will. Even in the direst straights, everyone can choose between evil and good in his own little span of personal sovereignty. There is no survivor to the Holocaust or other genocide cases who does not owe his rescue to the conscious deed of a fellow human being. If my father was able to flee Greece during the Nazi occupation, we owe this to the British commander who welcomed him in Crete on board of his ship, the Warspite, as by the way happened with my mother and her sisters, who were hidden by a Greek family from Athens, after their runaway from Salonika.
Someone could object that the memory of the Righteous should be limited to the field of Holocasut memory, because the term “Righteous” stems from a biblical definition and it would run the risk of watering down the value of those who rescued Jews when everyone else was turning a blind eye. To tell the truth the concept of Righteous man, which points with different nuances at those who stood out for their moral behaviour and wisdom, crosses all philosophical thought from the classical Socrates and Seneca, as well as Christendom and Judaism, and it is a reference point for modern philosophers from Kant to Patočka and Hannah Arendt.

The question, as pointed out by Israel’s Avraham Burg, is if the Holocaust has to be considered a san enormity that hit only the Jews or a crime that wounded the whole humanity. to which the Jews belong. If we opt for this latter choice Holocaust Remembrance becomes universal in all respects and its aim becomes that of underlining the fact that what happened to the Jews shall not repeat itself anymore regarding any human being.